The Four Elements of Physical Energy and How To Master Them 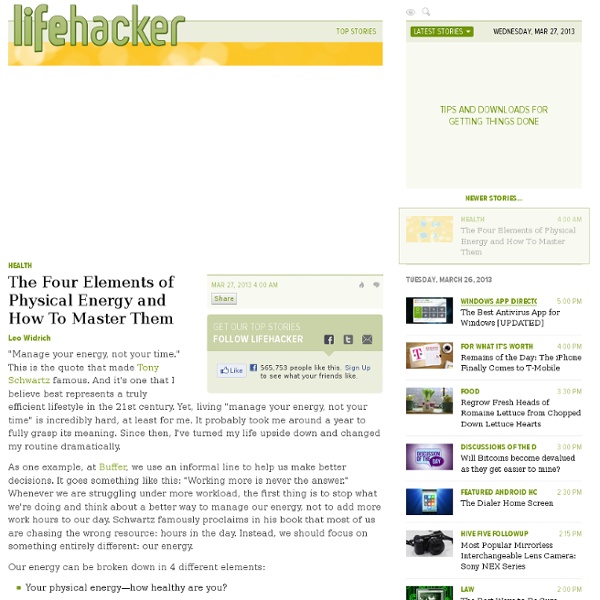 I have a FitBit (glorified pedometer if I ever saw one), and since getting it, my exercise goal each day is to hit 5,000 steps. On work days, I generally hit 2,000-3,000 each day consistently, meaning I only need to take a walk around the block twice when I get home to meet my goal. Recently, due to winter, I mostly was just pacing back and forth in my apartment while watching Netflix. I find that having a goal for step count rather than exercise is easier, because some days I just don't *feel* like exercising (like Saturdays, when I am running around doing errands), and typically on those days, I get a bunch of steps in anyways. I combine this method with Jerry Scienfeld's method of "Don't Break the Chain," which REALLY helps come Sunday when I'm not doing anything or going anywhere, and therefore really do need to concentrate to get my 5k steps in.

The Theory of Cumulative Stress: How to Recover When Stress Builds Up It was my first year of graduate school and my professor was standing at the front of the room. He was telling our class about a mistake he made years before. About a decade earlier, my professor had been one of the senior executives at Sears, Roebuck & Company, the large department store chain. They were in the middle of a massive national campaign and preparing for a major brand launch. For almost two months prior to the launch day, he was flying all over the country to strike up buzz with major partners and media companies. The week before the big launch day, his body gave out on him. Your Bucket of Health and Energy Imagine that your health and energy are a bucket of water. In your day-to-day life, there are things that fill your bucket up. There are also forces that drain the water from your bucket. The forces that drain your bucket aren’t all negative, of course. These outputs are cumulative. The Theory of Cumulative Stress I usually lift heavy three days per week. Why?

The Brain Hacks Top Founders Use To Get The Job Done Katia Verresen's new client had a big problem: He needed to find three to four extra hours in his day. This, of course, seemed like an impossible feat for an oversubscribed startup founder, but his ability to fundraise and recruit the best talent depended on it. By the time he met Verresen, executive coach to many such founders, he was drained, pessimistic, dreading every week before it started. Even though tech culture champions sleeplessness, overtime and burnout, Verresen has seen how this mindset can lead to failure. To turn it around, her first order of business is to collect as much data on her clients as she can and funnel it into a plan with one goal: Maximizing energy. Physical energy, emotional energy, and mental energy. But the proof is in the pudding. Her method has turned Verresen into one of the most sought after coaches in the business. Filling Your Buckets Maintaining and using energy wisely might seem like obvious advice, but it’s hardly ever heeded.

How To Get More Done By Having Less To Do Ask anyone how their life’s going these days, and either he or she will answer: “Busy!” “I think it’s an almost universal experience right now that people feel busy but not productive,” says Greg McKeown, whose new book, Essentialism: The Disciplined Pursuit of Less, argues for paring back commitments to achieve more. If you’re feeling stretched, here’s five ways how to pull yourself back together: 1. You’re looking at a new opportunity. The point is that “we need to see the difference between things that are good and things that are exceptionally good," he says. 2. As you examine your current life commitments, the best metaphor is to clean out your closet. Likewise, if you’re holding onto a commitment only because you’ve been doing it for a while, ask yourself if you’d add it to your life if it weren’t already there. 3. We think working more hours will help us get ahead. 4. Being an essentialist is “not just about saying no to stuff,” says McKeown. 5. [Image: Flickr user toffehoff]

The Productivity Paradox: How Sony Pictures Gets More Out of People by Demanding Less The Idea in Brief Human beings don’t work like computers; they can’t operate at high speeds continuously, running multiple programs at once. People perform at their peak when they alternate between periods of intense focus and intermittent renewal. Employees can increase their effectiveness by practicing simple rituals that refuel their energy, such as taking a daily walk to get an emotional breather or turning off e-mail at prescribed times so they can concentrate. If companies allow and encourage employees to create and stick to such rituals, they will be rewarded with a more engaged, productive, and focused workforce. Artwork: Antony Gormley, Capacitor, 2001. The way most of us work isn’t working. Nearly a decade ago, the Energy Project, the company I head, began to address work performance and the problem of employee disengagement. To date, the reaction to the program has been overwhelmingly positive.

4 Things You Thought Were True About Time Management - Amy Gallo by Amy Gallo | 1:00 PM July 22, 2014 I don’t know anyone who doesn’t struggle with how to make the most of their time at work. How do you stay on top of an overflowing inbox? To make matters worse, there are lots of misconceptions about what time management really comes down to and how to achieve it. It’s about managing your time. Time management is a misnomer, says Jordan Cohen, a productivity expert and author of “Make Time for the Work That Matters.” Teresa Amabile, the Edsel Bryant Ford Professor of Business Administration at Harvard Business School and coauthor of The Progress Principle, whose expertise in this area comes from reading the work diaries of thousands of workers who documented their struggles to get work done, says it’s more about managing your overall workload. You just need to find the right system or approach. “Having a system can be useful, but it takes more than that,” says Amabile. You need to devote time to change. This may be partly true.