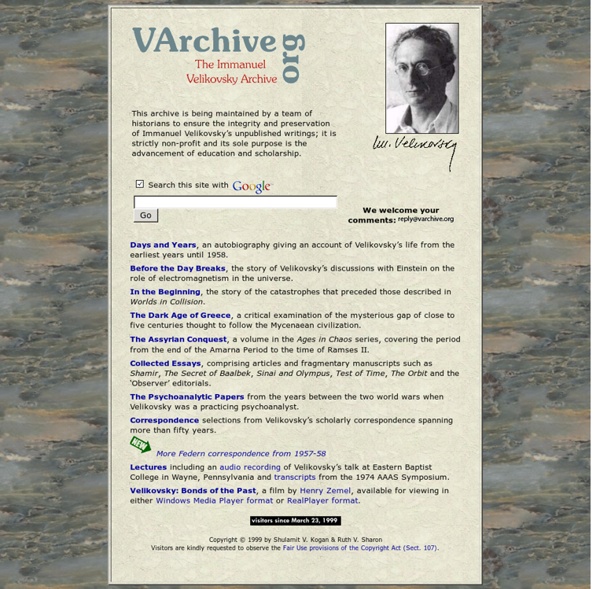 Dr. Steven Greer’s Response to Stephen Hawking’s Comment on Aliens « News from Behind the Scenes by Dr. Stephen Greer, The Disclosure Project, April 26, 2010 Published here: Thursday, April 29, 2010 @ 5:44 AM Dr. Steven Greer Wes Penre’s Comment: It is interesting how Dr. Steven Greer: It is unfortunate that Stephen Hawking has added his voice to a growing chorus of xenophobia and fear regarding what he terms “Aliens.”Secondly, as a scientist, he should know better: Any interstellar civilization would possess such technologies that the meager resources of Earth would be unneeded. Like this: Like Loading...

14 Coding Challenges to Help You Train Your Brain Programming is becoming an essential part of nearly every industry known to man, the way it helps to organize and maintain large systems is not possible to compare to anything else, and so more and more people begin their journey. You can learn to code both from interactive platforms and also from books – whichever you find most appropriate and easy to learn from. But, sometimes that’s not good enough, and we want to practice new things. Coding is a lot about creativity, your ability to come up with new and interesting ideas; but sometimes, due to a large amount of time spent tackling common problems, we forget about creativity. I’m not quite sure whether that is the reason coding challenges were made, but they certainly help with the part where you need to think of your own stuff to program. We could say that coding challenges are great for: 1. 2. HackerEarth provides a SaaS application to do an automated assessment of the technical and logical skills of candidates. 3. 4. 5. 6. 7. 9. 10.

Extraterrestrial Contact - Scientific Study of the UFO Phenomenon IBM Scientists Show Blueprints for Brainlike Computing To create a computer as powerful as the human brain, perhaps we first need to build one that works more like a brain. Today, at the International Joint Conference on Neural Networks in Dallas, IBM researchers will unveil a radically new computer architecture designed to bring that goal within reach. Using simulations of enormous complexity, they show that the architecture, named TrueNorth, could lead to a new generation of machines that function more like biological brains. The announcement builds on IBM’s ongoing projects in cognitive computing. “It doesn’t make sense to take a programming language from the previous era and try to adapt it to a new architecture. In a series of three papers released today, Modha’s team details the TrueNorth system and its possible applications. Each core of the simulated neurosynaptic computer contains its own network of 256 “neurons,” which operate using a new mathematical model. “Programs” are written using special blueprints called corelets.

Vatican Official Declares Extraterrestrial Contact Is Real You are here UFO News UFO Digest will provide you with the latest UFO news from around the world. UFO News Today See our latest UFO news in the UFO News Today section. UFOs UFOs are described as unidentified flying objects in the sky. Recent UFO News Go to our Recent UFO News section for more information. © 1998-2013 UFODIGEST.Com When reproducing our materials in whole or in part, a hyperlink to UFODIGEST.Com should be made. UFODIGEST.COM All rights reserved.

Brains in Silicon Welcome to Brains in Silicon. Learn about the lab, get to know the brains that work here, and find out about new projects that you could join. We have crafted two complementary objectives: To use existing knowledge of brain function in designing an affordable supercomputer—one that can itself serve as a tool to investigate brain function—feeding back and contributing to a fundamental, biological understanding of how the brain works. We model brains using an approach far more efficient than software simulation: We emulate the flow of ions directly with the flow of electrons—don't worry, on the outside it looks just like software. Welcome and enjoy your time here!

sirius.neverendinglight Intel Reveals Neuromorphic Chip Design The brain is the most extraordinary of computing machines. It carries out tasks as a matter of routine that would fry the circuits of the most powerful supercomputers on the planet: walking, talking, recognising, analysing and so on. And where supercomputers require enough juice to power a small town, the human brain does all its work using little more than the energy in a bowl of porridge. So its no surprise that computer scientists would like to understand the brain and copy its ability. Of course, computer scientists can simulate the behaviour of neurons and how they link together on conventional computers. So the race is on to develop a different kind of chip that more accurately mimics the way the brain works. (One reason the brain is so power efficient is that neural spikes charge only a small fraction of a neuron as they travel. Today, Charles Augustine at Intel’s Circuit Research Laboratory in Hillsboro, Oregon, and a few pals unveil their design for a neuromorphic chip.

Future - Science & Environment - Drake equation: How many alien civilisations exist? Are we alone? It is a question that has occupied mankind for centuries. Today, we live in an age of exploration, where robots on Mars and planet-hunting telescopes are beginning to allow us to edge closer to an answer. While we wait to establish contact, one technique we can use back on Earth is an equation that American astronomer Frank Drake formulated in the 1960s to calculate the number of detectable extraterrestrial civilizations may exist in the Milky Way galaxy. It is not a rigorous equation, offering a wide range of possible answers. Until ground-based observations, space telescopes and planet-roving robots uncover any tell-tale signs of life, what better way to speculate on how many intelligent alien civilizations may exist than to explore the universe with our interactive version of the equation.