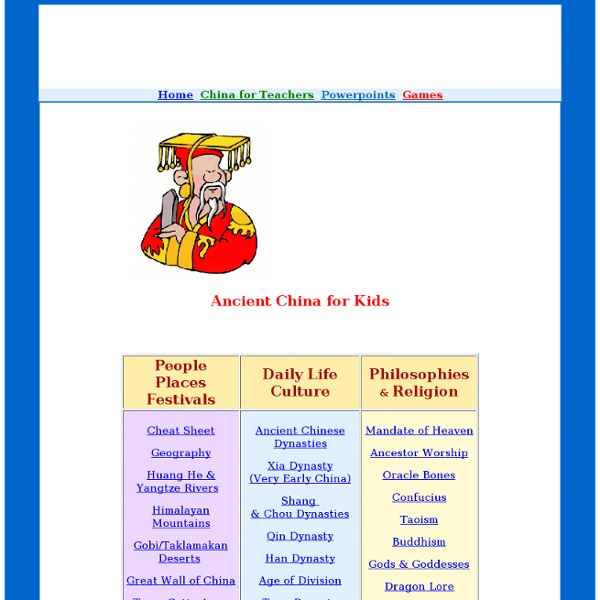 Ancient China - The Ancient Chinese Civilization Chinese Historical Accounts the Forbidden City, the home of the Chinese emperors until the last dynasty was overthrown in the 20th century Chinese history, until the twentieth century, was written mostly by members of the ruling scholar-official class and was meant to provide the ruler with precedents to guide or justify his policies. These accounts focused on dynastic politics and colorful court histories and included developments among the commoners only as backdrops. Of the consistent traits identified by independent historians, a salient one has been the capacity of the Chinese to absorb the people of surrounding areas into their own civilization. Sun-Tzu, the realist writer of the the influential "Art of War" The first prehistoric dynasty is said to be Xia , from about the twenty-first to the sixteenth century B.C. The Tomb of Emperor Qin Shi Huang The army of Terracotta warriors as found in situ at the Tomb of the last Qin Emperor The Zhou Period The Birth of Empire The Chinese Gods

Chinese History at mrdowling.com From at least 1766BCE to the twentieth century of the Common Era, China was ruled by dynasties. A dynasty is a family that passes control from one generation to the next. A dynasty does not have to last for a long time. One Chinese dynasty lasted more than 800 years while another lasted only fifteen years. advertisement The ancient Chinese believed their ancestors in heaven had chosen their leaders. There are indications of an earlier Hsia Dynasty, but the Shang were the first dynasty to leave written records. The Shang practiced human sacrifice. The Chou were initially nomads who lived west of the Shang. The Chou developed a feudal system in China. The Chou rulers taxed their subjects, but they used the wealth they collected to build huge walls to defend their cities from nomadic warriors. advertisement Chinese nobles gradually gained more power than the Chou rulers in a period of Chinese history that historians call the Age of Warring States. Listen as Mr.

China History: Chronology, Dynasty Qin Han Tang Song Yuan Ming Qing China, one of the countries that can boast of an ancient civilization, has a long and mysterious history - almost 5,000 years of it! Like most other great civilizations of the world, China can trace her culture back to a blend of small original tribes which have expanded till they became the great country we have today. It is recorded that Yuanmou man is the oldest hominoid in China and the oldest dynasty is Xia Dynasty. Chinese society has progressed through five major stages - Primitive Society, Slave Society, Feudal Society, Semi-feudal and Semi-colonial Society, and Socialist Society. Chinese History Chronology Ancient China Life History Facts:Dynasties,Discoveries,Religions,Crossbow,Sports,Chopsticks The Great Wall of China - China Travel Guide

Ancient China - Ancient Civilizations for Kids East Asia also has dry areas. The Gobi Desert is found along the border between Mongolia and China. The Gobi is the 5th largest desert in the world and is also the coldest. It is common to see frost or even snow on the sand and gravel dunes. Despite the dry and mountainous terrain of East Asia, there are some low plains suitable for early civilization. Heavy summer rains and snowmelt support 2 large river systems in East Asia. East Asia has many different climate types. Early History Humans probably reached East Asia between 30,000 and 50,000 years ago. Ancient China It is difficult to be sure about China’s early ancient history. The Zhou Dynasty (1046 BCE-256 BCE) lasted longer than any other dynasty in Chinese history. Agriculture was usually directed by the government. During the Zhou Dynasty Taoism (also spelled Daoism) and Confucianism developed—the two most important Chinese philosophies. Dynasty. Mongolian invasions from the north were a constant problem in China.

Chinese Dynasty Guide - The Art of Asia - History and Maps Chinese history, which dates back more than 5,000 years, is extraordinarily rich, complex-and potentially confusing. Understanding at least its basic chronology and some of its most notable events and developments is made somewhat easier by virtue of its ancient system of dynasties. The word dynasty means, quite simply, a succession of rulers from the same family. Beginning with the Bronze Age Shang dynasty, historical eras in China have borne the name of the family or clan that dominated during that period. Some dynasties, such as the Chou and the Ming, lasted for centuries. Over the lengthy span of Chinese history, each dynasty is distinguished both by its name and by the impact of individuals, outside influences, and technological advances on all aspects of its culture-economic, political, artistic, and religious. To use this guide, select from the dynasties at right or click on the timeline above.

Zhou Dynasty, Zhou Dynasty History, History of Ancient China, China's dynasties Era Information Time: 1027 B.C.-221B.C.Location of Capital:Hao, near the city of Xian, Shannxi ProvinceEmperors: Twelve kings for eleven dynasties Replaced by:Spring and Autumn Period According to Chinese accounts, Zhou was built by a chieftain of a tribe called Zhou. The chieftain overthrew Shang’s last ruler and build the Zhou dynasty. He settled down in Hao, a city near today’s Xi’an city in Shannxi province. Zhou dynasty has lasted for a long time from 1027B.C. to 221B.C. The Zhou Dynasty originated from the Zhou clan whose existence stretches back into history. At that time, the Shang Dynasty was under the rule of King Zhou. After Zhou Wenwang died, his son Ji Fa (Zhou Wuwang) succeeded him. It is so divided because the capital cities in the Western Zhou Dynasty of Fengyi (presently in the southwest of Chang'an County, Shaanxi Province) and Haojing lie to the west of the Eastern Zhou's capital of Luoyi (present Luoyang, Henan Province).

History: Ancient China for Kids Back to History for Kids Ancient China was one of the oldest and longest lasting civilizations in the history of the world. The history of Ancient China can be traced back over 4,000 years. Located on the eastern part of the continent of Asia, today China is the largest country in the world. Great Wall of China by Mark Grant Dynasties Throughout most of China's history it was ruled by powerful families called dynasties. Empire Ancient China also boasts the longest lasting empire in history. Government In early times the lands were ruled by the feudal system where lords owned the lands and farmers tended the fields. Art, Culture, and Religion Art, culture, and religion were often tied together. Mongols The great enemy of the Chinese was the Mongols who lived to the north. Fun Facts about Ancient China The Last Emperor of China, Puyi, became ruler when he was only 3 years old. For more information: Go here to test your knowledge with a Ancient China crossword puzzle or word search.