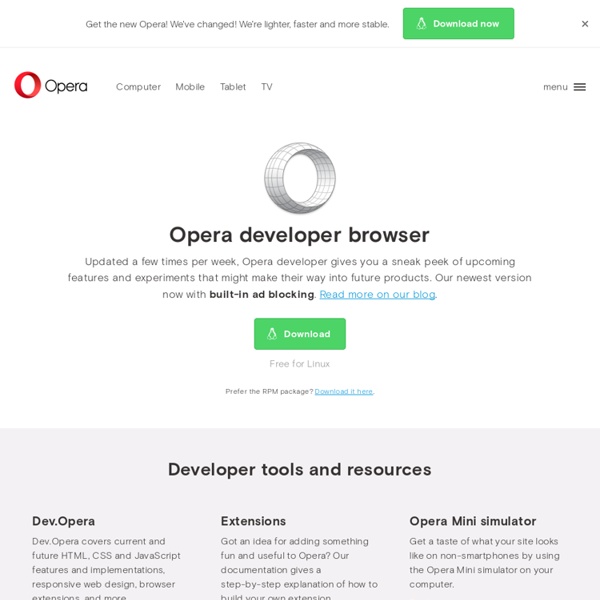 15 sites web developers and designers should know Creating a good website isn't an easy task, but there's a few tools that can definitely make your developer or designer life easier. In this article, I have compiled 15 extremely useful website that any web developer or web designer should have bookmarked. ColorCombos When designing a website, one of the firsts (and most important) steps of the process is to choose a color scheme. developer console bookmarklet By Opera Software Note: this bookmarklet is no longer supported, and only here for historical reference. Instead, we recommend you try out our powerful Opera Dragonfly – Opera's built-in web developer tools. There is also an extensive Opera Dragonfly documentation for your reference. This bookmarklet has been used by Web Application developers at Opera Software for some time. The tools are early previews, and should be considered alpha quality software.

40 Online Generators for Web Designers Should Bookmark Online Generators for Web Designers can be a great way to save time in your web design projects. High-quality generators can create graphics or code or even layouts in a matter of seconds or minutes, things that might take an hour or more if done by hand. Online generator are those tools that help us to create those popular “XHTML valid” CSS banners, micro buttons or css website templates in seconds. In such cases online generators can be of great help which do the necessary job and some tools don’t have to be downloaded also.

Desktop Team - Desktop Team In between stocking up on Vitamin D, thanks to the glorious summer weather in Europe, we’ve been busy stabilizing Opera 24 in the Developer channel; today, it moves into the Next stream, with some cool, new features. Tab preview Now, you can get a sneak peek of the content in tabs that aren’t currently active. Just hover one of the tabs to reveal a nice preview on your screen. If the website is refreshing itself in the background or has some sort of dynamically changing content, the preview will display the most recent snapshot of it. We’ve decided to disable this feature for HiDPI screens on Windows and Retina displays on Mac OS X.

8 Useful CSS Tools Writing better CSS is something all web designers and developers should strive for, and thankfully there are some useful tools out there to help do just that. For this post, we’ve rounded up a collection of new tools to help you with your CSS. From learning new CSS3 properties, to making your code more efficient, there’s bound to be a few tools here you will find useful. CSS3 Patterns Gallery Extensions - Add-ons With Opera switching from Presto to Chromium and a complete UI remake, our extensions infrastructure has also gotten a major overhaul: from Opera 15 onward, Opera 11 & 12’s extension format is no longer supported, and instead, we’ve switched to Chromium’s extension model. Check out our new documentation for developing extensions for Opera 15 and higher and start building your own extensions. Getting started API reference You can build Opera extensions using the Opera Extensions APIs and open web standards like JavaScript and HTML.

30 Must See Web Generator for Lazy Webmasters Here’s a list of 70 hand-picked, easy to use, and free web generators that will save you tons of time and energy. I have grouped these tools into 10 categories: Color Palettes, Robots.txt, Website Screenshots, Favicons, Web Backgrounds, Webpage Elements (buttons, tabs, etc), Memes, Forms, Logos, and Dummy Texts. The best part about these tools is that they are completely free (some need you to signup though). If you are looking ways speed up your work and channel more time and energy to new content ideas and marketing strategies, I believe the list is a must-bookmark. According to my last check on WordPress.com stats, there were more than 42 million blogposts published in May 2014 – and that’s just WordPress.com alone.

Dragonfly – Opera's built-in web developer tools Fast, lean and powerful. Meet Opera Dragonfly — our fully-featured suite of developer tools, designed to make your job easier. It’s just a right-click away. Golden Grid System GGS was my next step after Less Framework. Instead of a fixed-width grid, it used a fully fluid-width one, without even a maximum width. The resources it was published with are still available on GitHub.

leak-finder-for-javascript - Tool for finding memory leaks in JavaScript programs. In JavaScript you cannot have "memory leaks" in the traditional sense, but you can have objects which are unintentionally kept alive and which in turn keep alive other objects, e.g., large parts of DOM. Leak Finder for JavaScript works against the Developer tools remote inspecting protocol of Chrome, retrieves heap snapshots, and detects objects which are "memory leaks" according to a given leak definition. The default configuration of the tool detects goog.Disposable objects which were not dispose()d. goog.EventTarget is a subclass of goog.Disposable, and if an EventTarget is not disposed, event listeners are not discarded properly, and event listeners in turn keep DOM objects alive. It's possible to configure the tool to detect other similar misuses. Resources: Getting the code: