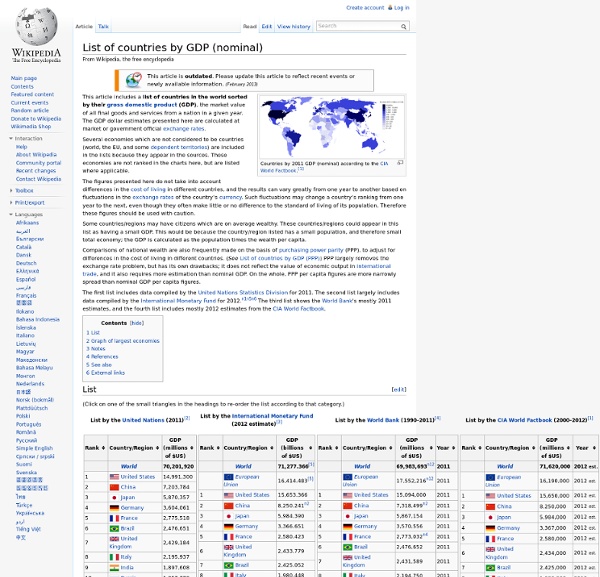 This article includes a list of countries in the world sorted by their gross domestic product (GDP), the market value of all final goods and services from a nation in a given year. The GDP dollar estimates presented here are calculated at market or government official exchange rates. Several economies which are not considered to be countries (world, the EU, and some dependent territories) are included in the lists because they appear in the sources. The figures presented here do not take into account differences in the cost of living in different countries, and the results can vary greatly from one year to another based on fluctuations in the exchange rates of the country's currency. Some countries/regions may have citizens which are on average wealthy. The first list includes data compiled by the United Nations Statistics Division for 2012. (Click on one of the small triangles in the headings to re-order the list according to that category.)

List of countries by GDP (nominal) per capita Countries by 2013 GDP (nominal) per capita.[1] This is a list of countries sorted by their gross domestic product per capita at nominal values. This is the value of all final goods and services produced within a nation in a given year, converted at market exchange rates to current U.S. dollars, divided by the average (or mid-year) population for the same year. These figures should be used with caution. Non-sovereign entities (the world, the European Union, and some dependent territories) are included in the list because they appear in the sources. All data are in current United States dollars. Jump up ^ Based on the IMF figures. Turkey grants US warship permission to enter Black Sea The aircraft carrier USS George H. W. Bush Turkey has given a US Navy Warship the green light to pass through the Bosphorus within the next two days as tensions in Ukraine’s Crimea region continue to divide world powers. Turkish sources, speaking with the Hurriyet Daily News on Wednesday, declined to elaborate on the name of the US warship. The US vessel to pass through the straits will meet the convention’s standards, the sources said. On Wednesday, the Russian Black Sea Fleet Staff confirmed to the Itar-Tass news agency that a US destroyer was expected to enter the Black Sea later this week. On Sunday, Tass reported that the guided-missile frigate USS Taylor, one of two Navy ships assigned to the Black Sea during the Sochi Winter Olympics was still in the Turkish Black Sea port of Samsun. The US Navy Warship USS Taylor. Meanwhile, it was reported on Tuesday that two Russian warships entered the Black Sea through the Bosphorus. No coastguard boats were seen escorting the ships. Like this:

U.S. To Expand Military Cooperation with Poland and Baltic States as a Result of Events in Ukraine, Crimea Washington (AFP) – The United States plans to expand military cooperation with Poland and Baltic states to show “support” for its allies after Russia’s intervention in Ukraine, Pentagon chief Chuck Hagel said Wednesday. “This morning the Defense Department is pursuing measures to support our allies,” including expanded aviation training in Poland and increasing the US role in NATO’s air policing mission over Baltic countries, Hagel told lawmakers. NATO’s top commander and head of the US European Command, General Philip Breedlove, also planned to confer with Central and Eastern European defense chiefs, Hagel said. “This is a time for wise, steady, and firm leadership,” Hagel told the Senate Armed Services Committee. “It is a time for all of us to stand with the Ukrainian people in support of their territorial integrity and sovereignty, and their right to have a government that fulfills the aspirations of its people.” “Understandably, they are concerned. Like this: Like Loading...

Ukraine crisis: Pentagon sends jets to patrol the Baltics Defense Secretary Chuck Hage Officials said the Pentagon would send six additional F-15 jets and one KC-135 refuelling aircraft to “augment” the mission this week. The US already provides four F-15 jets to the mission. “This action comes at the request of our Baltic allies and further demonstrates our commitment to Nato security,” a Pentagon official said. The Pentagon is now said to be “consulting” with Poland on a separate mission. “This is a time for wise, steady and firm leadership,” Mr Hagel told a Senate panel. via Ukraine crisis: Pentagon sends jets to patrol the Baltics – Europe – World – The Independent. Like this: Like Loading...

Russians seize Ukrainian missile defense units in Crimea : Interfax The Ukrainian Defence Ministry was unable immediately to confirm on the report, which quoted the source saying: “We now expect the arrival of Russian missile specialists and pro-Russian activists who will have to persuade the Ukrainian military personnel to carry out joint combat duties.” About these ads Like this: Like Loading... List of countries by military expenditures This article is a list of countries by military expenditure, the amount spent by a nation on its military in a given year. Military expenditure figures[2] are presented in US$ based on either constant or current exchange rates. These results can vary greatly from one year to another based on fluctuations in the exchange rates of each country's currency. Such fluctuations may change a country's ranking from one year to the next. Currently, the world's six largest military spenders are the United States, China,[3] Russia, the United Kingdom, Japan and France, all of whom are recognized as world powers. The UK, US, Russia, China and France are all veto-wielding permanent members of the United Nations Security Council. The first list is based on the Stockholm International Peace Research Institute (SIPRI) Yearbook 2013 which includes a list on the world's top 15 military spenders in 2012, based on current market exchange rates. SIPRI Yearbook 2013 – World's top 15 military spenders[edit]

My Blog Eric King: “We now have the Western mainstream media propaganda machine trying to convince people that everything is fine in Ukraine. They have stocks soaring today and there is pressure on gold as part of the show. Propaganda aside, what is really happening with the situation in Ukraine and Crimea, Dr. Dr. So there is a great danger here because to the threats that U.S. Continue reading the Dr. Advertisement To hear which company just made one of the most exciting high grade discoveries that just had a massive 101 meter drill strike, as well as major financial backers click on the logo: “The Russians are not going to permit the loss of their naval base in Crimea, or their military-industrial complex in the eastern Ukraine. This situation is now more dangerous than the Cuban Missile Crisis. Everyone in the U.S. mainstream media is calling for war. Well, the Russians aren’t going to back down -- they can’t. But what have we got in the White House? © 2014 by King World News®. Eric King