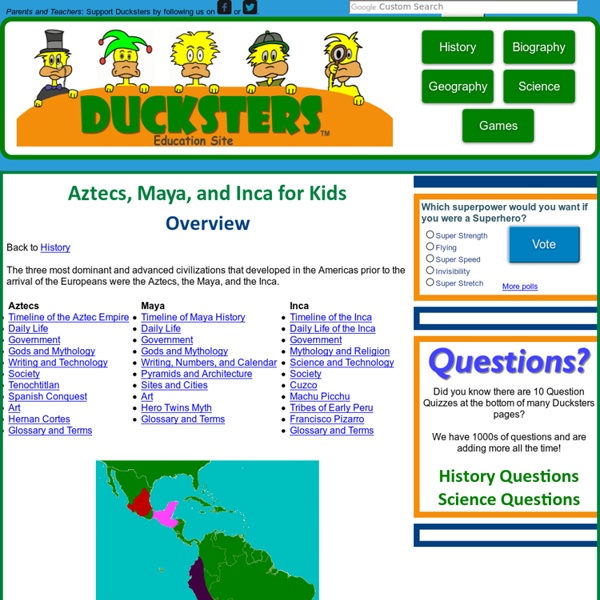 Back to History The three most dominant and advanced civilizations that developed in the Americas prior to the arrival of the Europeans were the Aztecs, the Maya, and the Inca. Map of Aztec, Mayan, and Incan Civilizations by Ducksters Aztecs The Aztec Empire was located in central Mexico. It ruled much of the region from the 1400s until the Spanish arrived in 1519. The capital city of the Aztec Empire was Tenochtitlan. The Aztec called their ruler the Tlatoani. Maya The Maya civilization began as early as 2000 BC and continued to have a strong presence in Mesoamerica for over 3000 years until the Spanish arrived in 1519 AD. The Maya were located in Central America in a region that is today made up of southern Mexico, the Yucatan Peninsula, Guatemala, Belize, and northern El Salvador. The Maya were the only American civilization to develop an advanced written language. Inca The emperor of the Inca was known as the Sapa Inca. ActivitiesCrossword PuzzleWord Search

The Incas for Kids - Terrace Farming Nobody went hungry in the Inca empire. The commoners ate little meat, but all people ate well. The Inca were the first to grow potatoes. There were many crops. The big three were corn, potatoes, and quinoa, which is a seed used to make flour and soups. How the Mind Works: 10 Fascinating TED Talks How memory works, what visual illusions reveal, the price of happiness, the power of introverts and more… 1. Peter Doolittle: How “working memory” works Mayan Civilization City of Copan, Honduras Copán, called Xukpi by its residents, rises out of the mist of western Honduras, in a pocket of alluvial soil amid rugged topography. It is arguably one of the most important royal sites of the Maya civilization. Occupied between AD 400 and 800, Copán covers over 50 acres of temples, altars, stelae, ball courts, several plazas and the magnificent Hieroglyphic Stairway. The culture of Copán was rich in written documentation, today including detailed sculptural inscriptions, which is very rare in precolumbian sites. Sadly, many of the books--and there were books written by the Maya, called codices--were destroyed by the priests of the Spanish invasion.

Maya Civilization for Kids - History Games and Videos Maya Civilization for Kids The Maya civilization was one of the most advanced ancient civilizations in the Central and South America before arrival of Europeans. They had an estimated reign of over 2000 years. The Maya developed a written language using hieroglyphs, art and architecture, mathematical and astronomical systems. Inca Art Home - Inca Civilization - Inca Art The Legacy of Incan Pottery and Art The legendary Incas of Peru have been likened to the Romans for the innovations they created during their reign, especially when it comes to agriculture, architecture and construction. However, outside of the marvel that is Machu Picchu, the major ruins left behind after their near extinction at the hands of the explorer Pizarro, Incan art is the most recognizable trace left to us of their remarkable foresight and skills. Inca Art - Background The first tribe in the Americas to develop planting cycles for agriculture, the scientific breeding of plants and animals, and some truly amazing and unusual architecture, they are also known for the creation of beautiful and durable art in the form of: pottery, tapestry and jewelry.

TEDx Talks How much do we really know about our food? Our global food system is precariously reliant on large, non-agile systems that offer little information about the source of our food and leaves much of the world's population struggling with food insecurity. The desire to better understand what makes it to our plate has sparked local and slow food movements, however, these strategies are not alone scalable to feed the next 2 billion people. Climate Change Killed off Maya Civilization, Study Says The drought theory is still controversial among some archeologists who believe a combination of overpopulation, an internecine struggle for control among the nobles, a weak economic base, and a political system that didn't foster power-sharing led to the Maya's collapse. One hypothesis suggests the Maya people themselves were responsible for their downfall as a result of environmental degradation, including deforestation. Defenders of the climate change theory, however, say the droughts sparked a chain of events that led to the demise of the Maya.

Satellite images hint at lost Mayan city - National Geographic Kids Did a 15-year-old boy really discover the remains of a Mayan city? Recently it was reported that William Gadoury, a teenager from Quebec, Canada, might have discovered an ancient settlement, hidden in the depths of the Mexican jungle. Using maps and charts, William spotted a link between the ancient civilisation’s settlements and the stars – they lined up!

David Epstein: Are athletes really getting faster, better, stronger? When you look at sporting achievements over the last decades, it seems like humans have gotten faster, better and stronger in nearly every way. Yet as David Epstein points out in this delightfully counter-intuitive talk, we might want to lay off the self-congratulation. Many factors are at play in shattering athletic records, and the development of our natural talents is just one of them. This talk was presented at an official TED conference, and was featured by our editors on the home page. Mayan Family The five subfamilies of Mayan languages are: There are numerous ruins of the ancient Mayan civilization in the states of Chiapas and Yucatan, as well as in Guatemala. These archeological sites and the artifacts discovered in them display a highly developed aesthetic sense—in stone sculpture, ceramic work, the casting of precious metals, mosaics, and the carving of crystal and jade—all of these produced without metal tools. The Mayas had invented the abstract symbol of zero to simplify mathematics long before it was in use in Europe, and the Mayan calendar was older and more efficient than the Julian calendar that was in use by the Spaniards who conquered Mexico. In the 1950s one could distinguish what area people came from by the distinctive clothing of both men and women. Now many are buying clothing in stores, especially the men.

Mayan Facts For Kids Mayan cities › Mayan cities were stretched out across a large area now occupied by southeastern Mexico, Belize, Guatemala, and Honduras. Each city had its own ruler. Mayan cities › Mayan art and craft › How 3rd century Chinese saw the Romans A country of “numerous minor kings” where fierce tigers and lions kill travelers. That doesn’t sound like your average description of Rome, does it? The borders of the Roman Empire and Han China around 100 AD. Jeremy Howard: The wonderful and terrifying implications of computers that can learn What happens when we teach a computer how to learn? Technologist Jeremy Howard shares some surprising new developments in the fast-moving field of deep learning, a technique that can give computers the ability to learn Chinese, or to recognize objects in photos, or to help think through a medical diagnosis. (One deep learning tool, after watching hours of YouTube, taught itself the concept of “cats.”)