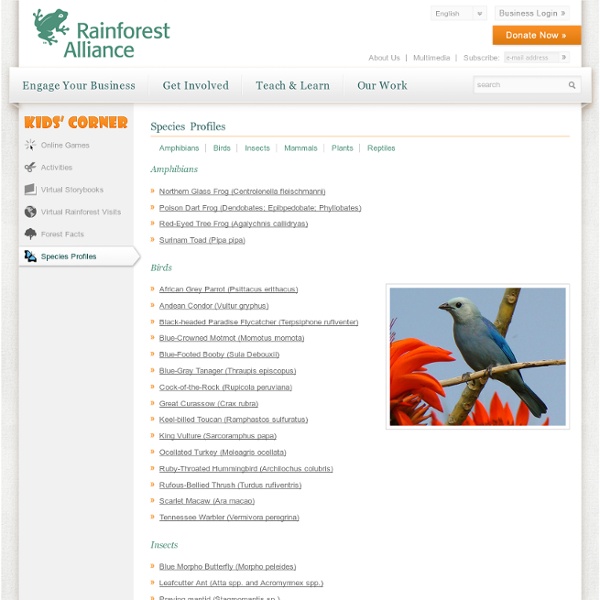 Saving Forests Page Content These nature-based initiatives aid in global mitigation efforts by preserving or restoring standing forests, which absorb massive amounts of carbon from the atmosphere.[Click to enlarge & view our slideshow] Protecting forests has always been central to CI's mission. Most Endangered Species in Amazon Rainforest Man is hell bent on destroying the environment in the name of ‘development’ without realizing that that it’s leading to the extermination of several species from our forests. It has been stated that over half of the globe’s animals are living in rain forests. With the fast disappearance of these amazon rainforests several of these endangered animals. Animals & plants need a specific environment so that they can stay alive- there needs to be sufficient water, food & shelter…more importantly there must be an equilibrium b/w prey & predator, so that the population doesn’t explode or vanish!

the world we live in the world we live in Loading… by Arkadiusz Jankowski (via The Planet on Photography Served) photographyserved.com Man in field with cattle (by World Bank Photo Collection) Flickr / worldbank Rainforest Biomes The tropical rain forest is a forest of tall trees in a region of year-round warmth. An average of 50 to 260 inches (125 to 660 cm.) of rain falls yearly. Rain forests belong to the tropical wet climate group. The temperature in a rain forest rarely gets higher than 93 °F (34 °C) or drops below 68 °F (20 °C); average humidity is between 77 and 88%; rainfall is often more than 100 inches a year. There is usually a brief season of less rain. In monsoonal areas, there is a real dry season. Endangered Rainforest Animals Animals are categorized under endangered species if they are at risk of becoming extinct either because of their few numbers or due to the change in the environmental condition. As per the International Union for Conservation of Nature and Natural Resources (IUCN) data, about 40 percent of the total organisms are on the verge of extinction in the near future. In 1963, the IUCN created the Red Data List of more than 15,500 species, after evaluating the extinction risk of various species and subspecies worldwide. This list is also known as IUCN Red List of Threatened Species or IUCN Red List. Among the many ecosystems, rainforests are those forest areas that are characterized by heavy rainfall (1750 - 2000 mm). They represent one of the richest ecosystems on Earth and are referred to as the 'Jewels of the Earth'.

AMAZON RAINFOREST ANIMALS Caiman lizard eye. Amazon Rainforest - © Steve Geer/Istockphoto Amazon rainforest is home to many strangest looking, largest and smallest, loudest and quietest, more dangerous and least frightening animals on Earth. Landforms in Tropical Rainforests The tropical rainforests are characterized by a variety of landforms and which give rise to a complex ecosystem in this region. The tropical rainforests are found in lowland regions. Topographical features of the rainforest regions include the mountains, valleys, streams, wetlands, rivers, etc. A thick forest cover is the prominent feature of tropical rainforests, irrespective of the topography (whether it is plain or mountainous).

Layers of the Rainforest By: C.M.Shorter EMERGENT LAYER The Emergent Layer is the highest level of the Rainforest. Giant trees reach to the sky. It is not uncommon for the hardwood evergreens and broad-leaf Rainforest trees to reach an amazing 180 to 200’ in height. The Emergent Layer of the Rainforest is the brightest layer receiving the most sunlight. Saving Forests Page Content These nature-based initiatives aid in global mitigation efforts by preserving or restoring standing forests, which absorb massive amounts of carbon from the atmosphere.[Click to enlarge & view our slideshow] Protecting forests has always been central to CI's mission.

Rainforest Facts for Kids Did You Know? Although lions can go astray in forests or jungles mostly due to a depleting habitat, they are not found in any type of rainforest in the world, and always prefer open plains, grasslands, or dry forests. Rainforests are forests that receive a high amount of rainfall (68 to 75 inches), more or less governing life on the Earth. Given their rich diversity, tropical rainforests are often called Jewels of the Earth. The oldest ecosystems are also a source for the discovery of 25% of natural medicines, and are hence also known as the world's largest pharmacy.