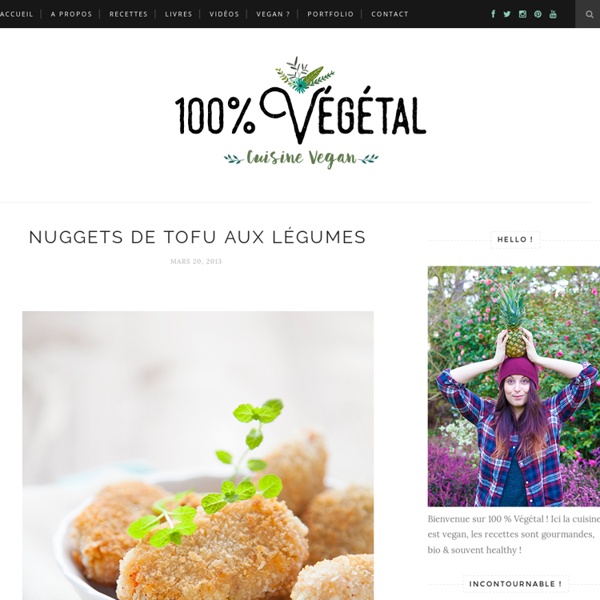 Cheezy Vegan Cauliflower Nuggets - Meat Substitutes, Recipes, Vegetables - Divine Healthy Food Whoa, I just realised when I bit into them and took photos, they freakishly look like chicken nuggets. Though there’s a big distinct in taste, it is totally awesome to eat, but sadly they aren’t that filling so if you’re making it for yourself, this may be enough but if you’re making it for two or three, you’ll need to make double, because you will want it ALL to yourself! I’ve been wanting to make some cauliflower nuggets ever since I tried making the cauliflower garlic bread. Creamy Garlic Thyme Potatoes Creamy Garlic Thyme Potatoes Creamy Garlic Thyme Potatoes – the best and easiest potatoes with garlic thyme in buttery and creamy sauce. A perfect side dish Prep time: Cook time:

sweet potato and quinoa fritters with avocado-lime sauce (vegan) I’m still loving sweet potatoes. It’s January and we still have a few lonely sweet potatoes storing in the barn. It feels like it was just yesterday that we were harvesting crate after crate of these puppies. I’m not going to lie, I miss having dirt under my fingernails, sore muscles, and fresh tomatoes right about now. It’s amazing how much we look forward to this slow season and how quickly we ache to get back to the dirt. These fritters are inspired by the quinoa sweet potato cakes I’ve eaten at Whole Foods. Vegetable Lo Mein Vegetable Lo Mein the Editors of Publications International, Ltd. Vegetable Lo Mein Yield Baked Red Lentil Falafel Salad The vibrant and hustling streets of Tel Aviv are flooded with falafel stands. They usually open up shop around noon for the on-the-go lunch crowd and stay open late, catering to the energetic night owls looking for cheap grub. My father was born and raised in Tel Aviv and remembers going to the neighborhood cart and ordering the only thing they had: basic fried chickpea fritters, served in a white flour pita and topped with tahini, and maybe some chopped salad — if you were lucky.

22 Ways To Get Your Vegan Snack Attack On It must be snacking season because I’ve had a lot of emails lately asking for some healthy vegan snack ideas and I thought it was a great idea for a post. Many of the recipes below are also some of the most popular snack recipes of 2011, so I will also add this post to my Top Recipes of 2011 page for easy reference. Ready to get your vegan snack attack on? 1. Sweet Potato Falafel + Chimichurri Sauce Today's Sweet Potato Falafel + Chimichurri Sauce recipes offer up a sweet spin on a traditional falafel ball. These balls are packed with fiber and vitamin A and rich in iron and protein. They come out of the oven warm and steamy, moist and tender on the inside, with a nutty savory accent in each sweet potato-filled bite, and lightly crispy on the outside.

Thai Pineapple Fried Rice Thai Pineapple Fried Rice For years I’ve snubbed all savory dishes that include pineapple, thinking that they were solely tourist fare. But apparently the joke’s on me, because pineapple fried rice, when done right, is a revelation. The trick, of course, is to balance out the sweetness to ensure that it doesn’t taste like a dessert gone terribly wrong. In this particular dish, the fish sauce and oyster sauce add saltiness and a bit of umami, Sriracha adds some heat, and the white pepper adds a bit of pungency (don’t leave it out!