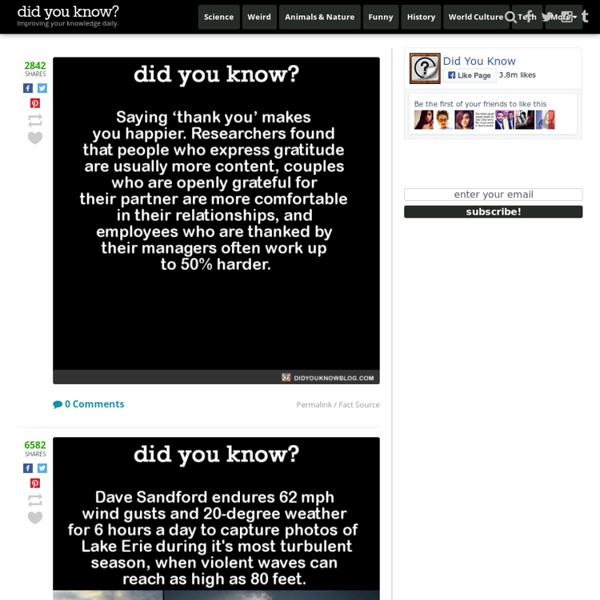 Here's a Mind-Melting, Mailable Skull Sculpture That’s twisted. Beijing artist Li Hongbo creates sculptures that look smooth and porcelain until you stretch them, lengthening in endless layers of soft white paper with almost invisible crevices, like some kind of psychedelic accordion, aaaaah. See busts, faces, skulls stretched and twisted with the mailability of a digital entity. Then see a backbone unfold in connected vertebrae. Li Hongbo is an artist and a book editor/designer by trade, so that’s where the paper kick stems from.

Engkanto As of July 1, 2013 ThinkQuest has been discontinued. We would like to thank everyone for being a part of the ThinkQuest global community: Students - For your limitless creativity and innovation, which inspires us all. Teachers - For your passion in guiding students on their quest. Partners - For your unwavering support and evangelism. Parents - For supporting the use of technology not only as an instrument of learning, but as a means of creating knowledge. We encourage everyone to continue to “Think, Create and Collaborate,” unleashing the power of technology to teach, share, and inspire. Best wishes, The Oracle Education Foundation

1ucasvb's lab 79629813053 305 1394863200 mrfb asked: What are your thoughts on the pi v. tau debate? (For those unaware of the Pi. vs. Tau debate, read the Tau Manifesto and then the Pi Manifesto). I’m actually extremely pro-tau, but only under certain conditions. I’ll explain. Warning: The following is my personal take on these subjects. On the merits of the debate Mathematics thrives on conventions. The use of the Greek lower-case letter pi (π) to denote a particular irrational number is one of such conventions developed in mathematics. In this respect, the tau vs. pi debate is a waste of time in my view. However, conceptual differences are important. Pi You see, π shows up everywhere in math by itself, no factors of 2 attached at all. But whenever tau (τ = 2π) shows up, people like to talk about circles. The most mathematically natural way of measuring angles is in units of radians. “Dimensions” vs. Radians No.

The Philippine Urban Legends There are 92 recorded lower Philippine mythical creatures here. There are more than 30 more creatures untold. Some of these beings originated from other Southeast Asian countries especially Malaysia and Indonesia, like the Tiyanak and Manananggal. Actually the 30 more creatures I said are still not written or known by the urban peoples. Some of these creatures are still present in many folklores, especially in Philippine urban legends. [Note: Some of the linked entries below can be the other name of the primary creature. Table of Contents Ada Description: A fairy Equivalent/Similar to: Lambana; English Fairy; Germanic Elf Other Names: N/A Category/Kind: Forest Creature Etymology: N/A Aghoy Description: An elf that helps people find their lost things. Agta Description: A hairy giant living in the forest, mostly in large trees as Balete Tree. Alan Description: Deformed spirits with wings, takes the blood from miscarriages and transforms it into human child. Amalanhig Amomongo Anggitay Bawa

Peter Root – City Made Out of Staples 100,000 staples have been intricately arranged to create a city over the span of 40 hours by Peter Root. AMAZING! (Source: fubiz.net) Green tea catechins shown to shrink cancerous tumors in humans by: John Phillip (NaturalNews) Natural health advocates have understood and demonstrated the potent antioxidant and anti-cancer properties of green tea consumption for decades. The Chinese have brewed the leaves of the Camellia sinensis plant for more than 5,000 years to benefit human health. Catechins such as epigallocatechin 3-gallate or EGCG are gaining prominent attention as they have been shown to halt cancerous tumor growth and improve arterial elasticity to promote cardiovascular health. Researchers from the University of Strathclyde in Scotland, publishing in the journal Nanomedicine have determined that EGCG extracted from green tea could be a powerful weapon in treatments for tackling cancer. This research is significant because it is believed to be the first time that this type of treatment has made cancerous tumors shrink or vanish in response to a therapy based on a totally natural compound. Dr. Sources for this article include:

Oceanographic - Schools of baby stingrays (by jake.pang) Amaterasu Solar by Amaterasu Solar Let Us presume a world where free energy is available to all. Also, Let’s add robots doing all the necessary work no One wants to do - or taking up the slack where not enough People are doing necessary work. In this scenario, there would not be any need for money - in any form: barter, trade, work exchange, cash, checks, electronic funds. You may doubt this, but Let’s examine a single case to illustrate the whole. Let Us now suppose that You have a hot dog cart - You like to hang around it from time to time and chat with People, say; You are a gregarious sort. Your robot is run on free energy, so it doesn’t cost You anything. Now Let’s say Your hot dogs come from pigs, and the farm - where the pigs are allowed to roam a few acres - is run by robots. The fields that grow the food for the pigs are farmed by robots, running on free energy, and perhaps a Human or three who LOVE to farm the land. So… How much would You charge for these hot dogs? You say, “Hey. The Plan is to:

barnard on wind | countering disinformation about clean, safe wind energy PHILIPPINE FABLED GOLD, FUTURE WORLD’S TREASURES Erle Frayne D. Argonza / Ra The Philippines abounds with stories about the ‘Yamashita gold’, a part of which accordingly went to the late dictator Ferdinand Marcos. Incidentally, certain writers did pen some well researched books about the subject, the result ending among the ‘controversial’ topics in town. Just exactly where did Yamashita, Japanese ‘tiger of Malaya’ fame, get all those tons of gold isn’t difficult to imagine. The ceaseless bombing raids by Allied forces of Japanese occupied territories and naval contingents proved too much at some point. According to some estimates, the part of the gold treasures that were dug by Marcos’ people in the Philippines amounts to 1.33 million tons at conservative estimates. Cautious of not wanting to lag behind in the investigations, I did my own intuitive research about the matter. I was overwhelmed by the amount, which by the way was just chunk. Just exactly where all that gold came from remains a tightly-held secret though.