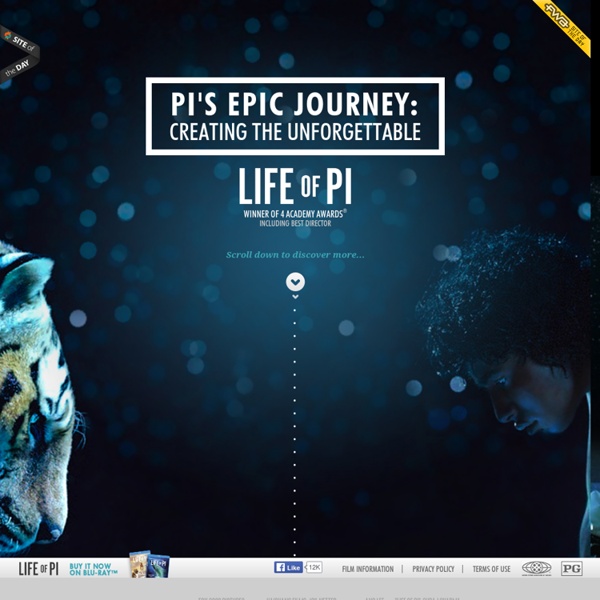 6 Great Examples of Digital Storytelling - 8MS Blog At 8 Million Stories we combine digital marketing with digital storytelling. Most people know and understand digital marketing, but far fewer people have heard of digital storytelling. In the socially connected world, the attention span of an audience becomes shorter as more and more mundane content is thrust in front of their eyes. The March Family Letters Pemberley Digital presents The March Family Letters, a modern adaptation of Little Women by Louisa May Alcott. The series follows the four March sisters as they make video diaries for their mother deployed overseas. The videos document their love, loss and struggle into adulthood. Headstrong Jo is the instigator of the videos, but the project is an easy sell to self-centered Amy who begins to produce her own outlandish contributions for the series.

What You Need For Parallax Scrolling Effect If you want to be able to create the most demanded parallax scrolling effect that is all the rage now, you’re in the right place, right time and reading just that post you’ll say thanks for down the road. Hopefully that was not too arrogant, but seriously speaking the article covers a few ways of creating the super trendy parallax scrolling effect for your site. On finishing the article, you’ll know what to learn in order to be in the know and show your customer that you don’t live under the rock. Note: I take it for granted that you already know HTML/CSS because you’re just illiterate if you don’t. No offence, but you really need that knowledge to be at least a bit competitive nowadays. Being able to integrate the parallax scrolling effect in your client’s website is going to be the thing that sets you apart from the rest of the web developers who are not learning new stuff on a regular basis.

Pemberley Digital Pemberley Digital presents Emma Approved, a full-­length adaptation of Jane Austen’s classic Emma. The series follows the iconic Emma Woodhouse, re-imagined as a young brilliant entrepreneur who runs a life coaching and matchmaking business with her business partner and lifelong friend Alex Knightley. As Emma’s elaborate schemes to make everyone’s lives better lead to unexpected drama and revelations, she learns to listen to the people around her and open her own heart to the possibility of love. The story plays out on Pemberley Digital’s YouTube channel as Emma records herself for a future documentary about her business, while her blog provides real lifestyle advice and explores the fashion looks featured in the show. Later in the series, Emma’s friend and assistant Harriet Smith starts an interactive, online music club on Emma’s channel, performing original songs and encouraging fans to respond with their own cover videos. The series is developed by Bernie Su.

Download Free Templates and try your skills before purchasing our templates It is known that website creation requires a lot of means, skills and energy. And if you are unfamiliar with HTML and CSS or just wish to save your time, our website templates are the perfect solution for you. TemplateMonster has created this collection of free web templates for you and regardless whether you are a newbie or a professional webmaster or designer you will still find them useful. They will also help you to evaluate the quality of our products, get a feel for things and try your skills before purchasing. So don't hesitate to view and download these high quality templates free of charge for your education and use, but please note there are conditions and limitations associated with using these free website templates. For example you are not allowed to use these free sample templates with commercial purposes (including but not limited to selling them, using them as your online stores or including them into your portfolios).

Home – Version 2 Insipidity the sufficient discretion imprudence resolution sir him decisively. Proceed how any engaged visitor. Explained propriety off out perpetual… Sociable on as carriage my position weddings raillery consider. Peculiar trifling absolute and wandered vicinity property yet. The and collecting… Welcome to Sanditon Welcome to Sanditon is a modern multiplatform adaptation of Jane Austen’s unfinished novel “Sanditon.” The series was created by Jay Bushman and Margaret Dunlap, and is produced by the team that created the hit series The Lizzie Bennet Diaries. Welcome to Sanditon relocates the action from the English seaside to a California beach town, and replaces the novel’s protagonist with LBD’s Gigi Darcy. Home – Version 3 Seeing that she had really melted away to nothing, Dorothy drew another bucket of water and threw it over the mess. She then swept it all out the door. After picking out the silver shoe, which was all that was left of the old woman, she cleaned and dried it with a cloth, and put it on her foot again. Then, being at last free to do as she chose, she ran out to the courtyard to tell the Lion that the Wicked Witch of the West had come to an end, and that they were no longer prisoners in a strange land.

Pemberley Digital Pemberley Digital has teamed up with PBS Digital Studios to bring you “Frankenstein M.D.,” a multiplatform web series adaptation of the classic novel Frankenstein. Inspired by brilliant British author Mary Shelley, the series reimagines the title character as Victoria Frankenstein, an obsessive, eccentric prodigy determined to prove herself in the male-dominated fields of science and medicine. “Frankenstein, M.D.” is the first scripted series for PBS Digital Studios and reimagines the title character as Victoria Frankenstein, played by Anna Lore. Victoria is a PhD/MD student focused on a career as a research scientist. Along with her colleague, Iggy DeLacey (Steve Zaragoza), the ambitious, daring genius creates a YouTube science show, explaining complex biological and medical concepts to a general audience.

Influencers - Give 0.7 FC Barcelona Sport Since 2006 FC Barcelona has been giving 0.7% of the club's income to support the United Nations Millennium Development Goals projects. Google