What Would Steve Do? 10 Lessons from the World's Most Captivating P... 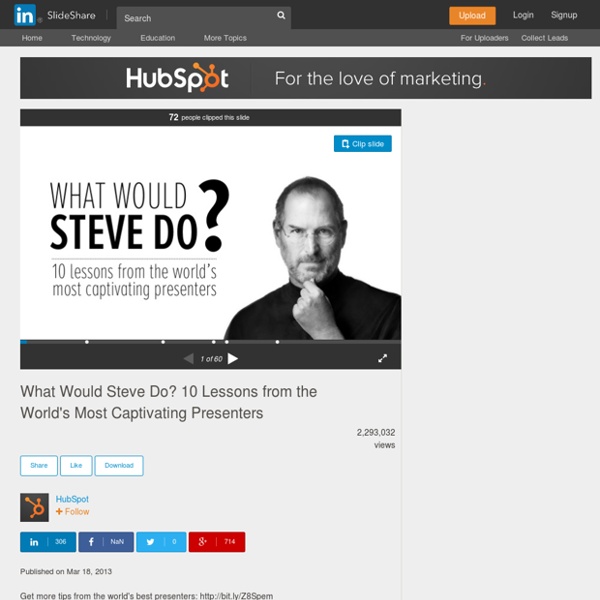 Will it fly? How to Evaluate a New Product Idea I've been thinking about a number of new product ideas lately. In doing so, I've been trying to come up with a more structured way of evaluating them. Here's a first attempt at defining that. It's not as clear as I'd like it to be. But perhaps you'll find it useful. Tractability Question: How difficult will it be to launch a worthwhile version 1.0? Blogger was highly tractable. Tractability is partially about technical difficulty and much about timing and competition—i.e., How advanced are the other solutions? In general, if you're tiny and have few resources, tractability is key, because it means you can build momentum quickly—and momentum is everything for a startup. If you're big and/or have a lot of resources—or not very good at spotting new opportunities, but great at executing—a less-tractable idea may be for you. Obviousness Question: Is it clear why people should use it? Everything is obvious once its successful. Deepness Question: How much value can you ultimately deliver? Wideness

How to Make Wealth May 2004 (This essay was originally published in Hackers & Painters.) If you wanted to get rich, how would you do it? I think your best bet would be to start or join a startup. Startups usually involve technology, so much so that the phrase "high-tech startup" is almost redundant. Lots of people get rich knowing nothing more than that. The Proposition Economically, you can think of a startup as a way to compress your whole working life into a few years. Here is a brief sketch of the economic proposition. Like all back-of-the-envelope calculations, this one has a lot of wiggle room. If $3 million a year seems high, remember that we're talking about the limit case: the case where you not only have zero leisure time but indeed work so hard that you endanger your health. Startups are not magic. Millions, not Billions If $3 million a year seems high to some people, it will seem low to others. So let's get Bill Gates out of the way right now. Money Is Not Wealth Wealth is the fundamental thing.

Windows Phone Ad Paints Apple and Samsung Fans as Buffoons Microsoft is attempting to triangulate in the Apple-Samsung war with a new ad that presents itself as above the fray of their petty bickering. The ad takes place during a wedding. As a nerdy guy steps up to photograph the event, an iPhone fan challenges him to remove "your enormous phone." "You mean the enormously awesome Galaxy?" another Samsung fan counters. "Search: 'One trick pony,'" a middle-aged woman replies, speaking to Siri on her iPhone. The scene soon erupts into a brawl. Though the ad seeks to differentiate itself from both Apple and Samsung, the background music and tone are strikingly similar to Samsung's anti-Apple ads, including its 2012 Super Bowl spot. At this point, Nokia is more of an underdog than Samsung was at the time. Image courtesy of YouTube, Nokia

26 Brilliant Minimalist Print Ads Leonardo da Vinci once said: “Simplicity is the ultimate sophistication”, and architect Ludwig Mies van der Rohe adopted the motto “Less is more” to describe his extreme simplicity, by enlisting every element and detail to serve multiple visual and functional purposes (such as designing a floor to also serve as the radiator, or a massive fireplace to also house the bathroom). Even after 500 years Leonardo’s words are true and this rule is still widely used in design and advertising. It may sound a bit contradictory, but simple things often require much more brain power to create than the most complicated stuff. And it always strikes you when something completely simple is capable of conveying so much more than you expect. Without further ado, let’s take a look at 26 most creative examples of minimalist advertising, and afterwards you can always leave a comment telling how much you liked our post! 1. “It’s the hat “ (Advertising Agency: Serviceplan Hamburg / München, Germany) 2. 3. 4. 5.

When Google Wants To Buy Your Startup, It Sends You An Email That Looks Like This Twitter Jeremie Berrebi, investor and founder of Zlio In 2007, Google reached out to a startup it wanted to buy called Zlio. Zlio was founded in 2006. It let anyone open an online store, even if they had nothing of their own to sell. Stores could be populated with products from Zlio's partners, such as Apple. Google told Zlio it would work quickly to get the acquisition deal done. Berrebi says he signed the NDA and Google did make an acceptable offer, but after 30 days there was no final term sheet. The decision not to join Google cost Zlio its life. Still, Berrebi says he has no regrets. So what does an acquisition email from Google look like, anyway? Here's the email Zlio received, below: (This email was originally posted on Berrebi's blog and has been reprinted below with permission): Jeremie Thanks for this. 1) sign the nda so we can start to exchange info – this is our standard nda. I hope this is exciting news for you as it is for us….

China's Mobile Market Figures at Your Fingertips Thanks to the folks at Shanghaiist for pointing out this informative animation from the ad company GroupM about the mobile space in China, appropriately titled ‘China at your fingertips.’ The clip includes a number of interesting data tidbits, including the claim that China’s 3G subscribers hit 120 million in 2011. For those of you keeping count, my colleague Charlie reported earlier today that an additional 107 million 3G-capable phones have shipped in the first half of 2012 according to the MIIT. In addition to this new tide of 3G handsets in China’s mobile market, GroupM also notes that in Q4 of 2011 Android held about 68 percent of the smartphone market. There are lots of other fun facts in the animation, so I encourage you to check it out for yourself. In addition to all that information, there’s an interesting narrative presented at the end of how a kid cleverly uses an LBS dating app to keep tabs on where his father is. [View on Youku]