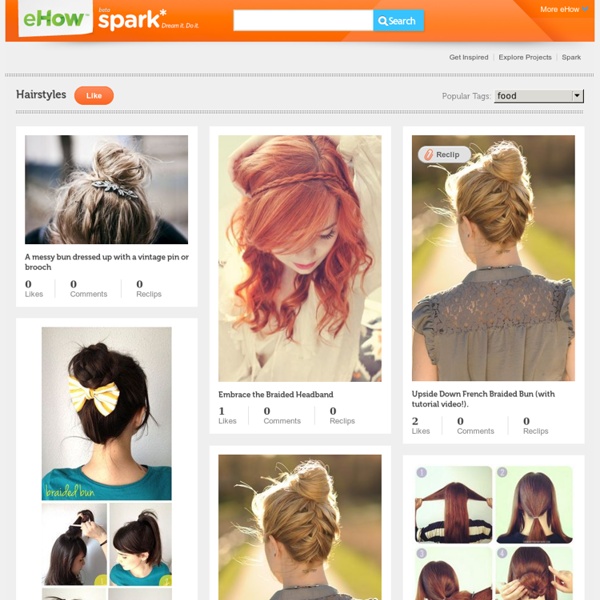 10 Skinniest Models on the Planet When skeletal was a huge trend in modeling, several models succumbed to death in order to stay skinny and “beautiful”. This was followed by the banning of very skinny models but we still see some of them gracing the runway and magazine covers today. Should we blame a designer’s penchant for exaggerated and tall silhouettes or our current standard of beauty?

Hair Archives - Kouturekiss - Your One Stop Everything Beauty Spot - kouturekiss.comKouturekiss – Your One Stop Everything Beauty Spot – kouturekiss.com The Ultimate Faux Hawk March 20, 2014 Disclaimer: This hairstyle is for the bold, brave and ultra glamorous! Maiden Twists Hairstyle D.I.Y. - A Beautiful Mess Hi there! We're super excited to share Katie's adorable hairstyle idea today. We all love maiden braids (also called heidi braids or dutch braids) and Katie came up with a really cute spin on this style.

10 of the Best Drug Store Beauty Buys I have an apology to make: I used to be one of those girls behind the makeup counter of a big, fancy department store selling you over-priced beauty products. While I won’t say which brand I worked for, I can tell you that my uniform consisted of all black and way too much makeup. Hey, it was the 90’s, after all. Well, I’m here to make amends. Because, you see, not all department store makeup is better than the drug store version.

How to Draw the Head From Any Angle The Basic Forms To draw the head from any angle you must first understand its basic structure. Look past all the distracting details and visualize the underlying forms. This ability to simplify can be applied to the features of the face, but when starting the drawing you could look even further. Ignore even the features and simplify to the most basic form of the head. I use a method taught by Andrew Loomis in his book, “Drawing the Head & Hands”.

Body Painting Art from all across the world. White Kitty Cat Body Paint, self painted by the fantastic Natasha Kudashkina in Canada. Natasha usually released a new bodypaint /art video every monday so be sure to follow her YouTube channel for more of these visual sensations. Bio: ”Daniel Lasris first started professionally face painting in 2001 and moved into body painting in 2008. Katmandew Face & Body Art now resides in Bristol, VA where Daniel produces works for local companies and events. Striving to always improve his techniques and abilities, Daniel travels around the USA attending conventions that specialize in face/body painting. He also attends other conventions as a vendor and demonstrator of his art.

Sea Salt Spray DIY A blissful day of summer for me is playing on the beach with sunkissed cheeks and wind-swept beach hair. Unfortunately, like I told you here last week- I am a beach girl without a beach. What if I were to tell you that you can capture that care-free wavy hair without spending a lot of money on a fancy Sea Salt spray or spending a day on the beach…although, I would take beach time any day. I have used several sea salt products out there but noticed they can been costly and at times left my hair slightly too crunchy and dry. Tag Archive for "wedding hairstyles" - The Beauty Department: Your Daily Dose of Pretty. - StumbleUpon photo/post/graphic design: Kristin Ess One of my all time favorite hairstyles for a wedding or for red carpet is the most super simple chic chignon (say that 3 times fast!). In this tutorial we show future brides and bridesmaids alike how to keep their hair out of the way while maintaining a timeless, classic look for any event.

tutorials Recently I've had a lot of requests for a step-by-step on these curls - These curls are done with a flat iron. A huge part of getting your flat iron curls to turn out is using the right kind of flat iron! When picking out a flat iron that's good for curling, look for one that's skinny, has rounded edges, and gets somewhat hot on the outside of the plates as well. For these curls I used the GHD Classic Styler. Also, don't be fooled by those kiosks in the mall claiming their flat irons are the only ones designed to curl and straighten.

Pantless Commuters from Around The Globe Flood Subways on No Pants Day 2014 Even the January cold couldn’t stop the madness of thousands of people ready to strip off their pants for an unforgettable subway ride. Thousands of commuters in 60 cities around the world were crazy enough to leave their pants behind for the 13th annual No Pants Subway Ride Day. They say this urban prank descended from an actual event. On January 10th, 1986, one New Yorker actually forgot to put on his pants and boarded the subway pantless.