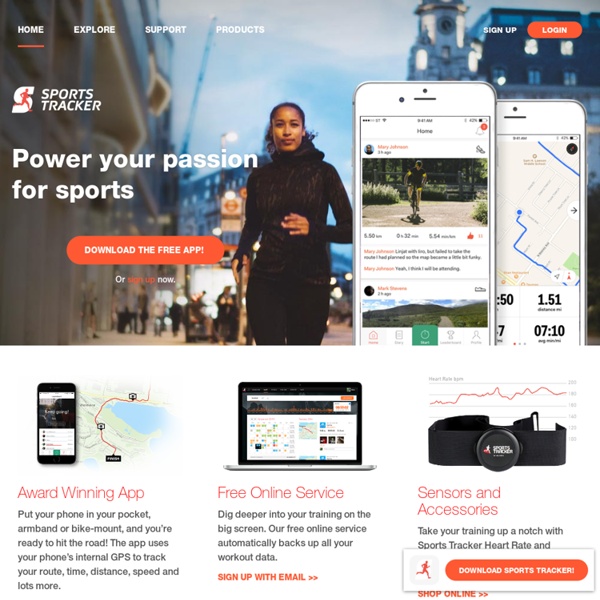 Sports Tracker (sportstracking) BEHAME.sk | bežecký portál, informácie o behoch, spravodajstvo, bežecká škola, fotografie Easytrails GPS the perfect iPhone application for outdoor, tracker GPS Lady Geek TV (ladygeektv) Home page | Cut and Jacked How Placebase Survived Google Maps Three years ago, when Google launched Google Maps for free, the whole world was agog with what you could find. One man who wasn’t thrilled: Jaron Waldman, founder of Los Angeles-based startup Placebase. He was contemplating starting a white-label mapping business when Google went and made the value proposition of his idea disappear. After all, it’s hard to compete with free. Or so you would think. Waldman thought differently. Two years on, his strategy seems to be paying off — the company, which is completely bootstrapped (read again: no VC dollars), is doing a few million dollars in revenues and is profitable. I wish I had more time to chat with Waldman, but he wanted to pitch me a new product from one of his clients.

Spartan Race Slovakia – Prekážkový terénny beh Apple Gets A Mapmaker. Where Does That Leave Google? In case you haven’t had enough location-based news tonight, here’s another very interesting bit. It looks like Apple has very quietly bought an online mapping company, Seth Weintraub of Computerworld reports tonight. Apple’s purchase of Placebase actually took place this past July, and a founder of a partner company that was using Placebase maps tweeted about it. But it slid under most people’s radars as that was the only news out there about it. Here’s why this is very interesting: It could well signal yet another rift in the relationship between Google and Apple. Obviously, much has been made about Apple’s rejection of the Google Voice app, but remember too that they also rejected (or did not approve, whatever) Google’s Latitude app, forcing Google to make a browser-based version. And Google actually helped Apple build the entire Maps application, aside from just letting them use their mapping data. Or maybe not. [photo: flickr/Manitoba Historical Maps]

In April, Apple Ditched Google And Skyhook In Favor Of Its Own Location Databases As you’re undoubtedly aware, location is one of the hottest fields out there right now. Startups, services, devices, and advertisers are all hovering around it. As you’re also likely well aware, Apple likes to be in control of their own devices. So it should come as no surprise to hear that Apple is moving to be in complete control of their own location database. Back in June, Apple changed its privacy policy to reflect some of the newer things they were doing with regard to location. This worried some people — including two U.S. Here’s the passage (highlights are mine): To provide the high quality products and services that its customers demand, Apple must have access to comprehensive location-based information. In other words, since iPhone OS 3.2 (since renamed “iOS”) which shipped on the iPad, and continuing with the new iOS 4, Apple is now in complete control of the location services on the iPhone (and iPad/iPod touch).

With New Ovi Maps, Nokia Seeks Location Heaven Nokia's Ovi Maps In an attempt to ward off competition from the likes of Google, Nokia, the largest maker of mobile phones, has released the latest version of its Ovi Maps software and made the app available for free. Nokia, despite an early start in the mobile phone-focused maps and navigation space, has lost attention to Google and Apple’s mapping and navigation efforts. With the new Ovi Maps app, the company is hitting back, especially at Google. More importantly, it’s Nokia’s big chance to become the GPS device maker of choice in countries where standalone navigation devices are still hard to find. “Maps and navigation are as core and natural in a phone as digital cameras,” Tero Ojanperä, Nokia’s EVP of services, said to me about Nokia’s new release. I would agree — and I think it’s further bad news for the standalone GPS companies such as Tom Tom and Garmin. For instance, he pointed out that the new Ovi Maps have the ability to add location context to your Facebook status messages.

Gokivo Navigator Onto New Windows Mobi Unlike most other smartphone platforms, Windows Mobile doesn’t come with a mapping application pre-installed by default. While this may very well change with the soon-to-be-announced Windows Mobile 7, it has thus far been up to the handset manufacturer to throw in a map app if they so choose. Later this week, messaging/location technology providers TCS will announce that Sony Ericsson has chosen their turn-by-turn application, Gokivo, to be pre-loaded onto future Sony Ericsson-made Windows Mobile devices. The first Sony Ericsson handset to come with Gokivo out of the box will be the Aspen, which was just announced last week. This is pretty big news for TCS; they just acquired the company behind Gokivo, Networks In Motion, back in December, and this is the first time any manufacturer has chosen to pre-install the app at the factory. The flagship features, according to TCS: Local SearchTraffic and WeatherLocation Sharing

Nokia Launches Free Turn-By-Turn Navigation Around The World For the past few days, Nokia has been trying to get everyone excited about.. something. They piqued our interests by sending out press event invites (for separate events in the UK and the US, no less), then revved the hype machine with a good ol’ fashion countdown timer. The US announcement is still a few hours away, but they just pulled back the curtain over in the UK — and while we can’t say for certain, I’m pretty sure the talk of the event will be the same on this side of the pond. The big secret? To dive a bit deeper into that “20 million.. handsets” number, we’re talking about users speaking 46 different languages across 74 different countries. Some of the features of the new, free Ovi Maps with Navigation: Maps are stored locally, and no continuous data connection is neededTraffic Information in 10 countriesLane assistance, speed trap warningsPedestrian mode, including shortcuts only possible on footFree Lonely Planet/Michelin travel guides