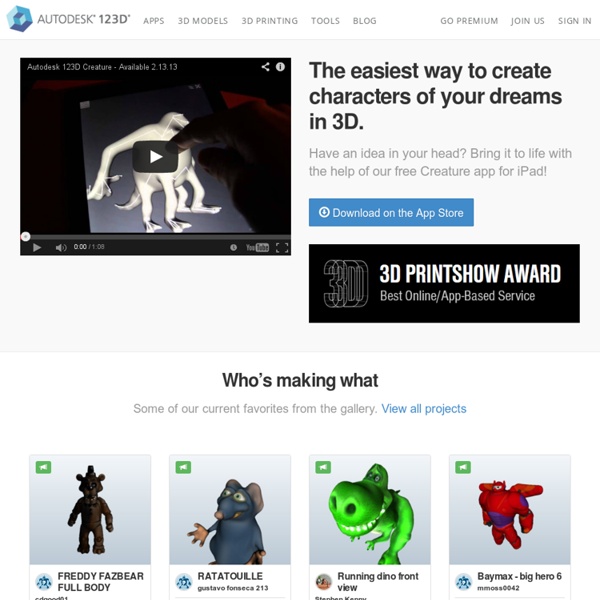 123D Make Autodesk 123D Sculpt Bulge, flatten, or refine your creation to achieve the dramatic, comic, or frightening effect you want. Decorate Add shades, tints, and hues with the built-in digital painting brushes, or rub areas of an image directly onto your creation. Export and share Share your project via email or social media sites, or export your sculpture as an .OBJ file. New Website Allows You to Create a 3D Printable Lithophane of Any Photo You Choose in 3 Seconds Lithophane I created using the lithophane generator – My wife and I on our wedding – 11/2013 One of the main reasons why people purchase desktop 3D printers is because of the customizability that it provides them in creating whatever they want. One type of 3D print that has become quite popular over the past several months is the lithophane. Historians believe the art form originated in the 1820s by a man named Baron Paul de Bourging. Since then, there have been many methods of creating lithophanes, many of which differ from one another in various respects. If you search Thingiverse for the the word “lithophane”, you will come across over 4,600 results, featuring lithophanes of everything from an Albert Einstein version, to one featuring the T-1 Robot from the Terminator movie. Now, thanks to a website called 3D Printing Rocks! The web-based app currently works with Google Chrome, Firefox, and Internet Explorer 10+ browsers. Have you created your lithophane using this website yet?

Augmented reality app makes Japanese newspaper more engaging for kids Gain instant and exclusive access to over 5,000 of the most creative ideas, innovations and startups on our database and use our smart filters to take you direct to those that are most relevant to your industry and your needs. Not interested? You can still browse articles published in the last 30 days from our homepage and receive your daily and weekly fix of entrepreneurial ideas through our free newsletters. How 3-D Printing Will Change Education Also known as rapid prototyping, 3-D printing is a technology that allows users to create three-dimensional physical products from a digital file. Each product is created one layer at a time, using an inkjet-like process that sprays a bonding agent onto a very thin layer of fixable powder. The bonding agent can be applied very accurately to build an object from the bottom up, layer by layer. The process even accommodates moving parts within the object. The first working 3-D printer was created in 1984 by Charles W. Educational institutions are still in the early stages of adopting this groundbreaking new technology, but a few early pioneers have shown us just how feasible–and useful–it can become. Developments in the Sciences One of the areas that 3-D printing has had its biggest impact is in the science field, where the ability to customize and instantly create a tool or new medical device has proven to be quite powerful. Research Fellow Dr. 3-D Printing as an Artistic Medium 1. 2. 3. 4.

Make Your Own 3D Printer for Under $60 Using Recycled Electronic Components with Instructables Design One of the obstacles to jumping headlong into the additive manufacturing milieu for many people is often the expense of the 3D printer itself. Further, for those intrepid, budding engineers, designers, makers, and artists, an initial foray might more reasonably and affordably involve using a less expensive and complex machine. Enter one Instructables contributor, “mikelllc,” who has designed a make-it-yourself 3D printer that is constructed largely from recycled electronic components. Currently, only about 12.5% of all electronic waste, or “e-waste,” is recycled. The EWaste $60 3D Printer is inexpensive to make given that you can round up the necessary components and follow the maker’s step-by-step instructions, which are clear and detailed. The 3D printer uses 1.75 mm plastic filament, which is both easier to extrude and also much more flexible than 3 mm filament. Is this a project you’d think to undertake?

Fully 3D Printed Working Engine Runs Completely on Hot and Cold Water — and You Can Print Your Own For Free 3D printing is fascinating, especially to those individuals who have not ever seen the technology in action previously. However, like with all new technology, this fascination subsides as time goes on and the technology becomes more commonplace. Perhaps we aren’t quite at this point yet with 3D printing, but the intrigue generated through the seeing, touching, and feeling of 3D printed objects will surely wither with time. In a project that could be considered “breathtaking,” “innovative,” and “potentially revolutionary,” Clucas has created what he believes is the first ever fully 3D printed working engine. “What I’m doing is creating projects for people to print, rather than objects,” explained Clucas to 3DPrint.com. These Stirling cycle engines are certainly dynamic, and without a doubt have the ability to keep anyone’s attention for more than a few seconds. “There are many things that you can do with these engines,” explained Clucas. As for Clucas, he isn’t stopping here.

Immersive Learning Experiences through Augmented Reality Author: Judy Bloxham - Jisc RSC Northwest; Allen Crawford-Thomas - Jisc RSC West Midlands; Stephen Wileman - South Staffordshire College What is Augmented Reality? Augmented Reality overlays the digital world over the physical world - thus ‘augmenting’ the real world experience. AR is not a new concept, in fact, it has been around since the 1990’s. AR and Pedagogy So how does AR relate to learning and what are the pedagogical arguments? Placing learning into the context to which it is relevant, relates to the concept of situated learning (Johnson, L. et al, 2011). Smart devices and their ever-ready ability makes them ideal tools to harness and present learning content via AR; bringing together cloud computing, ubiquitous computing, connectivity and personal, smart devices through “cyberinfrastructure mediation” (Pea, 2005). Many vocational subjects require lecturers to deliver practical demonstrations to their learners. Practical Examples of the use of AR in Education Counter Arguments

Polyes Q1 SLA-based 3D Printing Pen to Launch on Kickstarter in November Back in February of last year, Boston-based, WobbleWorks LLC. launched a Kickstarter campaign for what was the very first 3D printing pen, called the 3Doodler. The 3Doodler works similarly to that of a common FDM 3D printer, such as a Makerbot Replicator, with the exception that a person’s hand controls the path of the extruder rather than a computer. The pen, which raised over $2.3 million and became an overnight sensation, melts a strand of colored plastic in a similar fashion to that of a hot glue gun. I myself was very skeptical, until artists and makers around the world began creating impressive and intricate pieces of work with the pen. Today, we received news that a company based out of Delaware, called Future Make Technology LLC. has plans to launch their own 3D printing pen, called the Polyes Q1, and hopefully will be doing so with the help of the Kickstarter community sometime in November. Polyes Q1 Such technlogy has other advantages, besides the safety benefits.

Creating Augmented Reality for Education The cARe project explores two examples of how Augmented Reality (AR) could be used to enhance learning. The examples focus on the use of AR with nursing students. Further details of the projects are described below. You can also watch the video that was used to describe the project. Example 1 – Clinical Skills Laboratory The first of these projects looked at the use of AR in supporting simulated practice. In this example a series of markers were set up around the laboratory. The essential resources were accessed before, after and during practicing a skills enabling students to reflect on their learning (experiential learning), work together (promoting collaborative learning and peer feedback) and at their own pace (self paced learning). To gain some initial student feedback a group of students were filmed as they used the technology and then asked to participate in a focus group. Student Feedback The main insights from the focus group indicated that: Example 2 – Public Health Walk