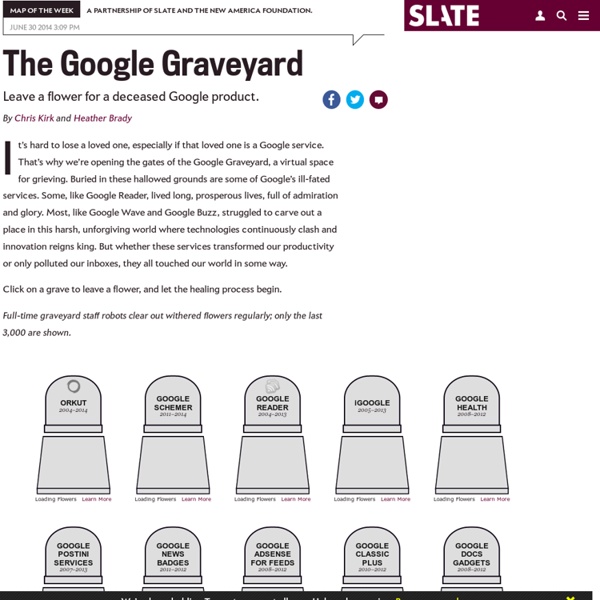 It’s hard to lose a loved one, especially if that loved one is a Google service. That’s why we’re opening the gates of the Google Graveyard, a virtual space for grieving. Buried in these hallowed grounds are some of Google’s ill-fated services. Click on a grave to leave a flower, and let the healing process begin. Full-time graveyard staff robots clear out withered flowers regularly; only the last 3,000 are shown. Update, June 30, 2014: A new grave was added to the graveyard after Google announced that its first foray into social networking, Orkut, has passed into the technological nether.

Google Translate now serves 200 million people daily SAN FRANCISCO -- Google Translate provides a billion translations a day for 200 million users, the company revealed here Friday at its Google I/O show for developers. Google doesn't often share details about the scale on which it operates, but Josh Estelle, leader for Google Translate's front-end and mobile engineering, had a few statistics to share about the service during a talk about it. Estelle, who's worked on Google Translate for seven years, also said 92 percent of the usage is from people outside the United States. The Internet is famously English-centric, but it's expanding gradually to other languages, helped in part by technological change such as right-to-left text support in browsers, and Web addresses that can be written in non-Roman alphabets. The service now works in 71 languages; the last five added are Bosnian, Cebuano, Hmong, Javanese, and Marathi, Estelle said. Google Translate launched with third-party technology but eventually switched to Google's own.  Ubiquity.

Sky ©2017 Google - Terms of Use Image Credit: DSS Consortium, SDSS, NASA/ESA Google Search Google Search (or Google Web Search) is a web search engine owned by Google Inc. Google Search is the most-used search engine on the World Wide Web,[4] handling more than three billion searches each day.[5][6] The order of search on Google's search-results pages is based, in part, on a priority rank called a "PageRank". Google Search provides many options for customized search, using Boolean operators such as: exclusion ("-xx"), alternatives ("xx OR yy"), and wildcards ("x * x").[7] The main purpose of Google Search is to hunt for text in publicly accessible documents offered by web servers, as opposed to other data, such as with Google Image Search. Major competitors of Google are Baidu and Soso.com in China; Naver.com and Daum Communications in South Korea; Yandex in Russia; Seznam.cz in Czech Republic; Yahoo! Search[edit] PageRank[edit] Search products[edit] In 2012, Google changed its rankings to demote sites that had been accused of piracy, except the Google-owned YouTube site.[20]

Publications by Googlers Google publishes hundreds of research papers each year. Publishing is important to us; it enables us to collaborate and share ideas with, as well as learn from, the broader scientific community. Submissions are often made stronger by the fact that ideas have been tested through real product implementation by the time of publication. We believe the formal structures of publishing today are changing - in computer science especially, there are multiple ways of disseminating information. We encourage publication both in conventional scientific venues, and through other venues such as industry forums, standards bodies, and open source software and product feature releases. Open Source We understand the value of a collaborative ecosystem and love open-source software. Product and Feature Launches With every launch, we're publishing progress and pushing functionality. Industry Standards Our researchers are often helping to define not just today's products but also tomorrow's. Resources Impact

PowerMeter We launched Google PowerMeter as a free energy monitoring tool to raise awareness about the importance of giving people access to their energy information. PowerMeter included key features like visualizations of your energy usage, the ability share information with others, and personalized recommendations to save energy. We partnered with device manufacturers and utilities around the world. We are pleased that PowerMeter helped demonstrate the importance of access to energy information, and created a model for others. We continue to see encouraging results about the importance of access to energy data. Momentum is building toward making energy information more readily accessible, and it’s exciting to see others drive innovation and pursue opportunities in this important new market. We’re proud of what we’ve accomplished with PowerMeter and look forward to what will develop next in this space.

Technology The technology behind Google's great results As a Google user, you're familiar with the speed and accuracy of a Google search. How exactly does Google manage to find the right results for every query as quickly as it does? The heart of Google's search technology is PigeonRank™, a system for ranking web pages developed by Google founders Larry Page and Sergey Brin at Stanford University. Building upon the breakthrough work of B. Why Google's patented PigeonRank™ works so well PigeonRank's success relies primarily on the superior trainability of the domestic pigeon (Columba livia) and its unique capacity to recognize objects regardless of spatial orientation. By collecting flocks of pigeons in dense clusters, Google is able to process search queries at speeds superior to traditional search engines, which typically rely on birds of prey, brooding hens or slow-moving waterfowl to do their relevance rankings. Integrity Data PigeonRank Frequently Asked Questions How was PigeonRank developed?