Extinct frog hops back into the gene pool 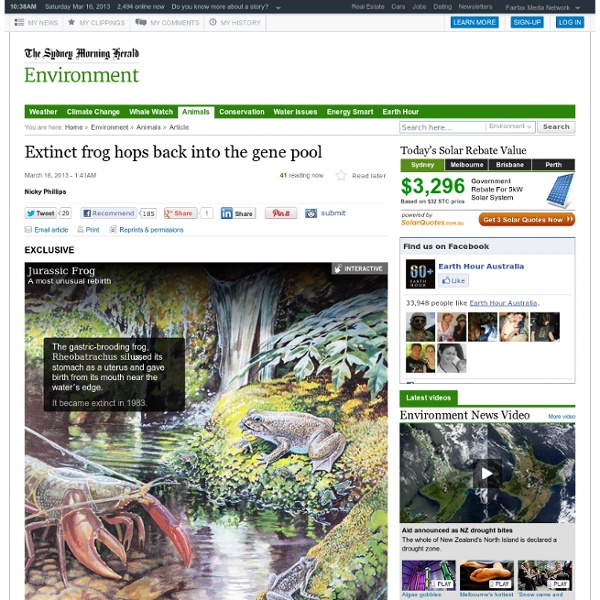 In what may be considered an early Easter miracle, an extinct species of native frog has begun its rise from the dead. Australian scientists have grown embryos containing the revived DNA of the extinct gastric-brooding frog, the crucial first step in their attempt to bring a species back to life. The team from the aptly named Lazarus project inserted the dead genetic material of the extinct amphibian into the donor eggs of another species of living frog, a process similar to the technique used to create the cloned sheep Dolly. The eggs continued to grow into three-day-old embryos, known as blastulas. Extict since 1983: The bizarre gastric-brooding frog. "This is the first time this technique has been achieved for an extinct species," said one of the project scientists, conservation biologist Michael Mahony. Advertisement Frozen for 40 years In the beginning, the single cell eggs "just sat there", said Professor Archer. The egg donor frog. But the team's success so far did not come easily. Related:  Recent Extinctions (1600 - 2022)

Elephant bird Description[edit] Size of Aepyornis maximus (centre, in purple) compared to a human, an ostrich (second from right, in maroon), and some non-avian theropoddinosaurs. Each gridline is one meter in height The elephant birds, which were giant ratites native to Madagascar, have been extinct since at least the 17th century. Étienne de Flacourt, a French governor of Madagascar in the 1640s and 1650s, mentions an ostrich-like bird said to inhabit unpopulated regions.[2] The explorer and traveler Marco Polo also mentions very large birds in accounts of his journeys to the East during the 12th and 13th centuries. Species[edit] Four species are usually accepted in the genus Aepyornis today; A. hildebrandti, A. gracilis, A. medius and A. maximus,[7] but the validity of some is disputed, with numerous authors treating them all in just one species, A. maximus. Genus Aepyornis Genus Mullerornis Etymology[edit] Mullerornis agilis Taxonomy and biogeography[edit] Aepyornis maximus restoration Biology[edit]

Colorado River Toad Description[edit] Range of Incilius alvarius in the United States (it also inhabits northwest Mexico) The Colorado River toad can grow to about 7.5 inches (190 mm) long and is the largest toad in the United States apart from the non-native cane toad (Rhinella marina). Distribution and habitat[edit] The Colorado River toad is found in the lower Colorado River and the Gila River catchment areas, in southeastern California, New Mexico, Mexico and much of southern Arizona. Biology[edit] The Colorado River toad is carnivorous, eating small rodents, insects, and small reptiles and other toad species; like many toads, it has a long, sticky tongue which aids it in catching prey. The toads generally breed in small rain pools after the summer showers start; it spends approximately one month as a yellowish-brown tadpole before moving onto the land. Drug use of poision[edit] Ethic[edit] Fresh venom can easily be collected without harm to the toad. State laws[edit] Toad at night in Tucson References[edit]

Extinct Galapagos Giant Tortoises Could Be Brought Back To Life When Lonesome George died in 2012, it was thought that so did the last Pinta Island giant tortoise. Discovered roaming the rocky island in the Galapagos archipelago on his own in 1972, it was believed that he was the last of his subspecies. Despite a global search to find him a mate, it proved fruitless over the 80 years of his life. Now, Yale researchers think that his DNA might live on (or at least that of his relatives), diluted in hybrid tortoises found on another island descended from tortoises thrown overboard 150 years ago. The tortoises, originally found living on seven of the Galapagos Islands, are divided into 15 subspecies, of which only 11 survive to this day. Divided into two different types depending on the shape of their shell, the tortoises are known as either domed or saddlebacked. Giant galapagos turtle munching on Floreana. But how did the original purebred tortoises get so far from the islands on which they originated?

Frog Photos "I'd kiss a frog even if there was no promise of a Prince Charming popping out of it. I love frogs." ~ Cameron Diaz Funny Frogs by Sean Crane List of recently extinct mammals A large number of prehistoric mammals are extinct, such as Megafauna. See List of prehistoric mammals. This is an incomplete list of historically known extinct mammals, their dates of extinction, and former range. Mammals included are organisms which have been described by science, but which have subsequently become extinct. Many of these animals have become extinct as a result of human hunting, for food or sport, or through the destruction of habitat. Marsupials[edit] Sirenians[edit] Steller's Sea Cow (1768), Commander Islands Rodents[edit] Ungulates[edit] Cebu Warty Pig (2000, Philippines) Lagomorphs[edit] Proboscids[edit] Tubulidentata[edit] Bibymalagasia (200 BCE, Madagascar) Soricimorphs[edit] Bats[edit] Cetaceans[edit] Chinese River Dolphin Baiji (2006, China) (officially listed as functionally extinct; it is possible that a few aging individuals still survive) Artiodactyls[edit] Aurochs Carnivores[edit] Javan Tiger, pictured 1938 Subspecies Primates[edit] Koala lemur (1500, Madagascar) See also[edit]

Tasmanian tiger DNA 'lives' again Seventy years after the ferocious Tasmanian tiger went extinct, its marsupial DNA has been resurrected inside mice. This is the first time that genetic material from an extinct animal has functioned inside a living host. The technique has huge potential, say the researchers. For instance, it might help to reveal how dinosaurs or Neanderthals looked. Andrew Pask at the University of Melbourne, Australia, and colleagues extracted DNA from four 100-year-old Tasmanian tiger, or thylacine, samples. The DNA was badly fragmented, but the team managed to isolate one specific DNA sequence from each of the animals. Bigger questions The team then copied the DNA snippet, coupled it with a gene that produces a blue pigment, and injected it into very early mouse embryos. "We could see it very clearly in the developing cartilage," says Pask. Other researchers have resurrected extinct DNA inside cell lines in the lab. This work isn't a step towards cloning the entire thylacine, Pask stresses.

The Rate of Extinction: 3 Species per Hour About 6 waves of massive extinction are known in the history of the Earth. The last one wiped out the dinosaur world 65 million years ago and was probably due to a meteorite collision. But the recent one has no natural causes. Scientists and environmentalists issued reports about threats to creatures and plants including right whales, Iberian lynxes, wild potatoes and even wild peanuts. Experts gathered on May 22, at the International Day for Biological Diversity, a report on the threatened species from whales and Iberian lynxes to wild potatoes and wild peanuts. The threats to the wildlife diversity vary from habitat loss due to land clearance for farms or cities, poaching, pollution and rising human populations to global warming. determination at all levels - global, national and local," he said. It is obvious that the goal set by world leaders at an Earth Summit in 2002, namely a "significant reduction" by 2010 in the rate of species losses, will not be achieved.