45 Power Adverbs to Sprinkle in Your Resume 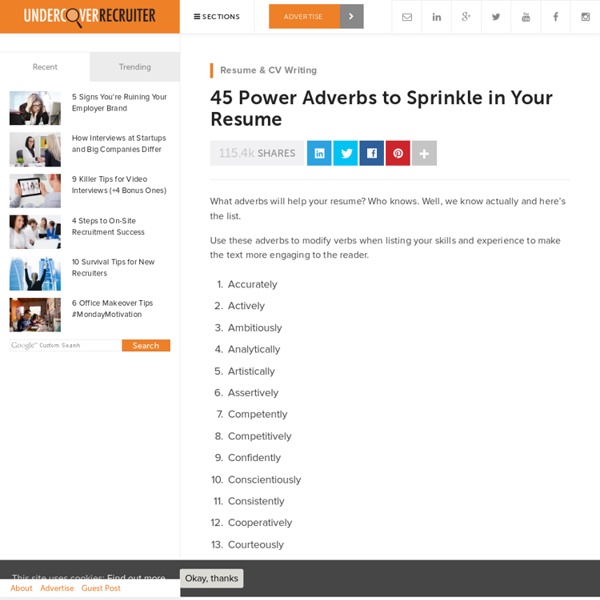 Photos of children from around the world with their favorite toys [30 pictures] Over the course of 18 months of travel, photographer Gabriele Galimberti’s shot his series “Toy Stories,” which features images of children worldwide posing with their most prized playthings… Thailand Sweden Kenya The 10 Best Questions to Ask at a Job Interview Pangolins under threat in Gabon as demand surges in Asia Hunted for generations for its tasty meat, the scaly-skinned pangolin is under threat in Gabon as demand for the small mammal surges in Asia, where it is used in traditional medicine. "People hunt the pangolin like any other meat because the forest is often the only resource" for people in Gabon,…

Carl Rogers Carl Ransom Rogers (January 8, 1902 – February 4, 1987) was an influential American psychologist and among the founders of the humanistic approach to psychology. Sourced[edit] On Becoming a Person (1961)[edit] It is the client who knows what hurts, what directions to go, what problems are crucial, what experiences have been deeply buried. Honest Movie Titles For This Year's Oscar Nominees Let's, now that we officially know who the nominees are, pretend that we've seen, discussed and formed valid critical opinions on the contenders in this year's Best Film race and laugh knowingly at these reductive remixes of their movie posters - Honest Titles For 2013's Oscar Nominated Movies. It's funny because it's true! See the rest at College Humour.

100 Simple Ways to Change Your Life for the Better May 7th, 2008 100 Simple Ways to Change Your Life for the Better No matter how perfect you may think you are, the fact this there’s always some small way you can improve for yourself and others. Painting with Seasoning and Spices. Sensory Creativity If you're a regular reader you'd know that we love to paint. The freedom, the creativity, the expression, the colours Interview Questions You Must Ask In many ways, moving ahead in our careers depends on our bosses: the people who can motivate us, advise us, challenge us, or — on the other hand — make our lives miserable. If you've never had a boss who made you miserable, consider yourself lucky. And if you want to wind up lucky in a new job, you need to know something about your would-be boss.