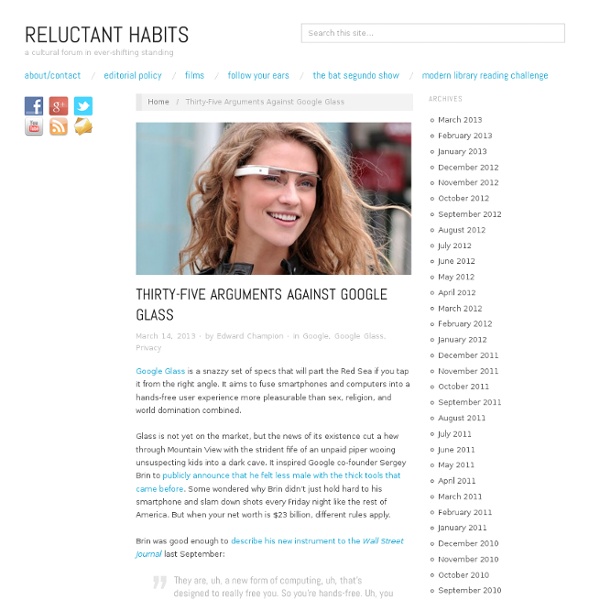 Google Glass is a snazzy set of specs that will part the Red Sea if you tap it from the right angle. It aims to fuse smartphones and computers into a hands-free user experience more pleasurable than sex, religion, and world domination combined. Glass is not yet on the market, but the news of its existence cut a hew through Mountain View with the strident fife of an unpaid piper wooing unsuspecting kids into a dark cave. It inspired Google co-founder Sergey Brin to publicly announce that he felt less male with the thick tools that came before. Brin was good enough to describe his new instrument to the Wall Street Journal last September: They are, uh, a new form of computing, uh, that’s designed to really free you. The glasses are not now available to the general public, but Google informed The Verge a few weeks ago that the specs would cost “less than $1,500″ when hitting the stores, which is believed to be sometime next year. Here are thirty-five arguments against Google Glass: Related:  Anti Google Glass

MONSTRO 10 Best Handheld Mobile Jammer, Cell phone blocker MONSTRO 10 best handheld mobile jammer works with all frequency bands used by the wireless devices around you except low frequencies and 4G band. When you have such device in your hands, there is almost nothing that can hurt your privacy or break the secrecy of your location within 15 meters radius around you. Even the most advanced tracking, eavesdropping, wiretapping and other anti privacy technologies are unable to work properly when they are in the working range of this product. Our MONSTRO 10 is a professional cell phone blocker that needs to be treated accordingly. Here is the full list of frequencies which this device is able to work with: GSM800 and GSM1900 in USA, GSM900 and GSM1800 in EuropeCDMA850 in both USA and EuropeGPS L1, L2 and L5 bands, GLONASSWiFi, Bluetooth and all devices operating at 2.4GHz (like hidden spy cameras and microphones)3G frequency4G is an optional frequency which we can also add to this jammer. Specifications:

I, for One, Welcome Our Google Glass-Wearing Cyborg Overlords You may have noticed the Google Glass backlash is well underway. Once we were thrilled by the promise of the eye-level connected screen and camera technology; once we poked satirical fun at it. But no more. Now, it seems, we've reached the stage of being threatened by it. One dive bar in Seattle banned customers from wearing Glass; given that no consumers and few developers have their hands on the tech yet, and Google HQ is 700 miles to the south, this was a little like your local doctor's office banning human cloning. An online campaign called "Stop the Cyborgs" is offering Google Glass ban signs for free download, as well as stickers and T-shirts. All in all, it's an uncomfortable time to proclaim what Eddie Izzard dubbed "technojoy" about the prospect of a whole new category of gadget. Heaven forbid that here, in the 2010s, jetpack-less and flying car-free, we might actually gain an item of personal gear that looks the teensiest bit futuristic. But fear not, fellow cyborg-lovers.

#opManning In media mythology, the years from the mid-1960s to the mid-’70s were the classical age, a heroic time of moral clarity. Mainstream journalism marinated in adversarialism. Little Southern newspapers infuriated their own readers by staring down segregation. True, that retelling is a bit of myth-spinning; the media never were quite that gutsy. And over the past decade or so, it’s as if that classical formula of defiance and struggle has been turned upside down. Even Watergate is upended, with Bob Woodward, one of the two Washington Post reporters who exposed the scandal, now the target of scathing revisionism because of a trivial dustup with a thin-skinned White House. And looming above those breathtaking role reversals is the media’s disgraceful abandonment of the boldest news source of his generation, Pvt. The ferocity of the Obama administration’s attack on Manning and on Wikileaks, the online anti-secrecy organization that brokered his leaks to the media, has been withering. Like this:

The Google Glass feature no one is talking about — Creative Good (Also: en français, en español, 简体中文, 繁體中文, На русском, in het nederlands, em Português) Google Glass might change your life, but not in the way you think. There’s something else Google Glass makes possible that no one – no one – has talked about yet, and so today I’m writing this blog post to describe it. To read the raving accounts of tech journalists who Google commissioned for demos, you’d think Glass was something between a jetpack and a magic wand: something so cool, so sleek, so irresistible that it must inevitably replace that fading, pitifully out-of-date device called the smartphone. Sergey Brin himself said as much yesterday, observing that it is “emasculating” to use a smartphone, “rubbing this featureless piece of glass.” Like every other shiny innovation these days, Google Glass will live or die solely on the experience it creates for people. Except for the awkward physical design, the experience of using Google Glass has won high praise from reviewers. I’m still not done.

Life through a lens: Will Google Glass turn us all into drones? Google Glass was demonstrated at SXSW this week, prompting much debate about whether the tech giant's latest gadget will change how we see the world. But more than that, what effect will real-time, heads-up data have on our consciousness over time? Ed Castillo, head of planning at TBWA\Chiat\Day in New York, goes through the looking-glass... The demonstration of Google Glass at SXSWi has aroused – or at least has coincided with – Twitter activity from technologists and ad types (Twechs and Twads?) about everything from hyper-practical concerns to thoughtful accounts of how this innovation might change the shape of public life. Even a cursory look at the digital echo emanating from Monday’s demo reveals the disruptive promise of this innovation. What follows is a surface contemplation of just a few of the issues that Google Glass use will raise, building toward a subtler, longer-time-horizon issue that I’ve not yet seen addressed by the Twechs and Twads… A blurring of bodies and bits

Digital Encryption and Digital Signatures with GPG | Ubuntu DC LoCo Team For those of you who are unfamiliar with the concept of digital signature and encryption, I hope this tutorial will provide some insight. It is designed to convey the concepts and plays a bit fast and loose with the specifics. (Follow the links for more details than you probably want.) This doesn't cover the specific commands needed to use GPG or PGP . The resources listed at the end of this document will get you into that. DO follow the link to the Keysigning Steps near the bottom of this page, once you have a feel for this material. As people become more concerned about the security of e-mail, efforts have been made to improve privacy and guarantee authenticity of various digital media. A popular encryption system created by Phil Zimmermann is known as Pretty Good Privacy (PGP) . These encryption programs use an encryption technique known as public key cryptography . Symmetric keys are not considered very secure by today's standards. Fingerprints and Signatures Well... not exactly.

The Borg Complex Case Files UPDATE: See the Borg Complex primer here. “Resistance is futile.” This is what the Borg, of Star Trek fame, announces to its victims before it proceeds to assimilate their biological and technological distinctiveness. It is also what many tech gurus and pundits announce to their audiences as they dispense their tech-guru-ish wisdom. I first wrote about the Borg Complex last June in response to an article on technology and religion which confidently announced that “religion will have to adapt.” Using this same article as a specimen, I identified six tell-tale symptoms of a Borg Complex. 1. 2. 3. 4. 5. 6. These symptoms may occur singly or in some combination, and they may range form milder to more hysterical manifestations. An interesting case of the Borg Complex was on display in a Huffington Post interview of Evernote CEO, Phil Libin. “It’s going to seem barbaric to not have that stuff.” And perhaps it may be so. The contrasts among Libin, Harden, and Kelly are also instructive.

How people might misuse Google Glass A video has been posted online that echoes concerns about the introduction of Google Glass, the web giant’s augmented reality spectacles. Advertisement How we moderate Gnu Privacy Guard (GnuPG) Mini Howto (English): Concepts Next Previous Contents 1. Concepts 1.1 Public Key Encryption Classic methods for encryption only use one key for encryption. The use of so-called Public Keys can solve this problem. Crucial in this concept is that the secret key remains a secret and should not be given away or become available to anyone else but the owner of this key. 1.2 Digital Signatures In order to prove that a message was really sent by the alleged sender the concept of Digital Signatures was invented. A digital signature is made through a combination of the secret key and the text. 1.3 Web of trust A weak point of the Public key algorithms is the spreading of the public keys. The PGP solution (and because of that automatically the GnuPG solution) exists in signing codes. 1.4 Boundaries to security If you have data that you would like to remain confidential, there is more to it than just determining which encoding algorithm to use.

“Stop the Cyborgs” launches public campaign against Google Glass Less than two weeks ago, Seattle’s 5 Point Cafe became the first known establishment in the United States (and possibly the world) to publicly ban Google Glass, the highly anticipated augmented reality device set to be released later this year. The “No Glass” logo that the café published on its website was developed and released (under a Creative Commons license) by a new London-based group called “Stop the Cyborgs.” The group is composed of three young Londoners who decided to make a public case against Google Glass and other similar devices. “If it's just a few geeks wearing it, it's a niche tool [and] I don't think it's a problem,” said Adam, 27, who prefers only to be identified by his first name. “But if suddenly everyone is wearing it and this becomes as prevalent as smartphones—you can see it becomes very intrusive very quickly. “Most people [have] no idea what they were looking at” For now, at least one privacy-minded senator doesn’t seem worried. That's a sentiment Hartzog echoed.

Augmented Reality: Google Glass contractual restrictions | Beyond The Beyond *Well well, this is gonna get interesting. “Google is barring anyone deemed worthy of a pair of its $1,500 Google Glass computer eyewear from selling or even loaning out the highly coveted gadget. “The company’s terms of service on the limited-edition wearable computer specifically states, “you may not resell, loan, transfer, or give your device to any other person. “Welcome to the New World, one in which companies are retaining control of their products even after consumers purchase them. “It was bound to happen. ” “If it takes off like iPhones did, this is going to be part of people’s everyday activity, and now we are starting down this path that is going to be completely controlled,” said Corynne McSherry, the Electronic Frontier Foundation’s intellectual property coordinator….”