The social economy: Unlocking value and productivity through social technologies 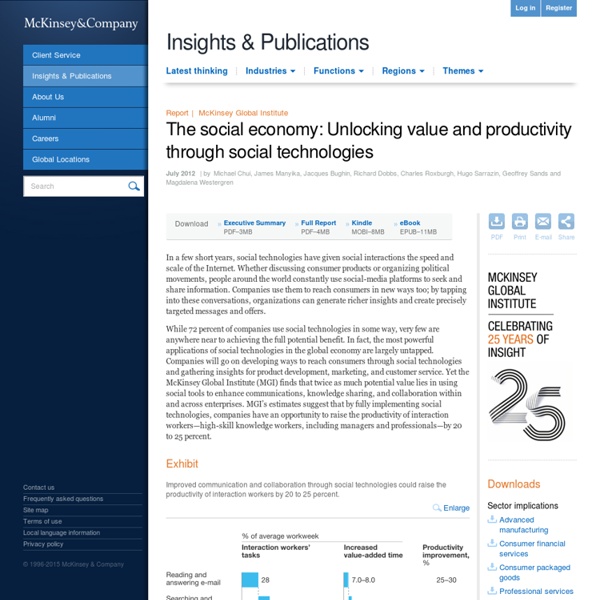 In a few short years, social technologies have given social interactions the speed and scale of the Internet. Whether discussing consumer products or organizing political movements, people around the world constantly use social-media platforms to seek and share information. Companies use them to reach consumers in new ways too; by tapping into these conversations, organizations can generate richer insights and create precisely targeted messages and offers. While 72 percent of companies use social technologies in some way, very few are anywhere near to achieving the full potential benefit. In fact, the most powerful applications of social technologies in the global economy are largely untapped. Companies will go on developing ways to reach consumers through social technologies and gathering insights for product development, marketing, and customer service. Exhibit Enlarge Two-thirds of this potential value lies in improving collaboration and communication within and across enterprises.

Big data: The next frontier for innovation, competition, and productivity The amount of data in our world has been exploding, and analyzing large data sets—so-called big data—will become a key basis of competition, underpinning new waves of productivity growth, innovation, and consumer surplus, according to research by MGI and McKinsey's Business Technology Office. Leaders in every sector will have to grapple with the implications of big data, not just a few data-oriented managers. The increasing volume and detail of information captured by enterprises, the rise of multimedia, social media, and the Internet of Things will fuel exponential growth in data for the foreseeable future. 9 Ways to Increase Twitter Engagement A new report from social commerce company Buddy Media offers insights on how businesses can use Twitter to heighten engagement and produce favorable results. It states that to more effectively leverage Twitter as a marketing channel, businesses need to know “when to Tweet, what to Tweet and how often to Tweet.” Here are nine findings from the report that ecommerce merchants can put to use to improve their Twitter marketing efforts. 1. Schedule Tweets for Weekends

Young people need guidance to cope with the threats posed by social media This week marks the first anniversary of the summer riots, where mobile devices played such an important part in connecting rioters with each other and were used to capture much of the carnage and brutality. Of course, the technology didn't cause the riots, but as the police found out, BlackBerry Messenger (BBM) helped crowds gather at remarkable speed and to circumvent police lines. A year is a long time in terms of technology. New mobile handsets and apps become integrated into our lives at astonishing speed.

NationalField: Barack Obama's social network of choice A social network started by a British entrepreneur helped President Obama get voted into power and is now being touted as Facebook for the workplace. It is the social network where no one is friends. After all, there just isnât time to make them when your network is geared towards winning the race to become the most powerful man in the world. Four years ago, Barack Obama strode into the White House on a wave of hope and euphoria. Accelerate! Perhaps the greatest challenge business leaders face today is how to stay competitive amid constant turbulence and disruption. Any company that has made it past the start-up stage is optimized for efficiency rather than for strategic agility—the ability to capitalize on opportunities and dodge threats with speed and assurance. I could give you 100 examples of companies that, like Borders and RIM, recognized the need for a big strategic move but couldn’t pull themselves together to make it and ended up sitting by as nimbler competitors ate their lunch.

The Buffer blog: productivity, life hacks, writing, user experience, customer happiness and business. 375 Flares Filament.io 375 Flares × “Everything has been figured out, except how to live.” – Jean-Paul Sartre In the few years I’ve lived, there were countless mistakes I’ve made. Now, I’m not at all a person of regret.

Crowdfunding site pays authors to release DRM-free e-books E-books may have opened up a whole new medium for enjoying the world’s literature, but the DRM – digital rights management – technologies they’re often coupled with have also imposed new restrictions on the way that literature is shared. Enter Unglue.it, a new site from New Jersey-based Gluejar that uses crowdfunding to pay authors to “free” their work as e-books published under a Creative Commons license. It’s up to rights holders to start an Unglue.it campaign for an already-published book they own the rights to, including setting the amount required and a deadline by which time that needs to happen. Book lovers, meanwhile, can visit Unglue.it to browse through the site’s active book campaigns; if they don’t see one for a book they care about, they can add a title to the Unglue.it wishlist.

Should Your Boss Care About Your Klout Score? - Michael Schrage by Michael Schrage | 9:00 AM November 27, 2012 A confession: I don’t know my Klout score. A second confession: I don’t want to know my Klout score. A third confession: I’m a hypocrite. I’m almost always looking for ways to meaningfully assess how influential — positively and negatively — my colleagues, collaborators and co-workers are. 72 Fascinating Social Media Marketing Facts and Statistics for 2012 Social media and inbound marketing techniques have been a boon for marketers. Not only do leads generated through social and content marketing cost half as much as traditional outbound-generated leads (see below), they also close at higher rate (again, see below). And social media isn’t just about lead generation of course. While prospective buyers are using search and social to research products and services before making purchase decisions, marketers and PR professionals can use those same tools to research buyer wants and needs. And their competition.

Social Media Tools for Business – Functional Categorization I recently went through an exercise with a team of digital media colleagues to describe social media tools a professional may encounter on the job. This is a part of a broader project to define what skills workers need to stay competitive in the digitally enabled workplace. We categorized them based on what the tool is used for because with any social media effort, you first have to define goals, map out which activities will help you achieve those goals and select tools accordingly.

Employee social networking − Sabre Town case study By Toby Ward − Once the domain of the Internet, social networking has virally spread to the intranet with impressive results for Sabre. We humans are social creatures. With rare exceptions, we strive to relate, converse and connect with others. Social networking promotes online communities of interests and activities that promote connections between users in a more open and robust manner than simple e-mail. While best represented by the quintessential Facebook, social networking has made significant strides into the corporate intranet where employee networking is becoming a valuable asset to leading organizations that covet the new breed of employees. This young, web savvy employee cohort desires – if not demands – a more social and dynamic work environment that uses the best possible Web 2.0 (Intranet 2.0) technology.