Stewart Brand: The dawn of de-extinction. Are you ready? 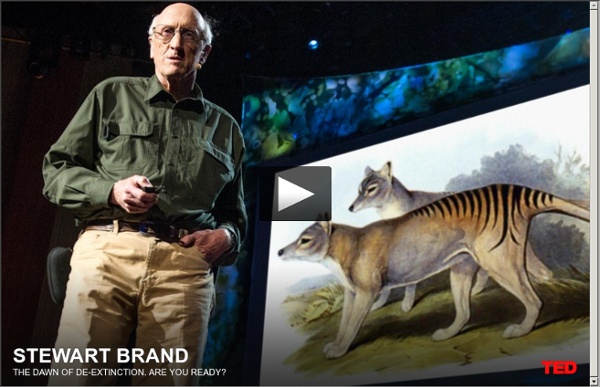 Russian scientists revive an ice age flower A plant that was frozen in Siberian permafrost for about 30,000 years has been revived by a team of Russian scientists — and borne fruit, to boot. Using tissue from immature fruits buried in fossil squirrel burrows some 90 feet below the surface, researchers from the Russian Academy of Sciences in Pushchino managed to coax the frozen remains of a Silene stenophylla specimen into full flower, producing delicate white blooms and then fruit. The findings, published this week in the journal Proceedings of the National Academy of Sciences, describe what is a record for reviving presumably dead plant tissue — and may provide clues as to what makes some plants hardier and longer-lived than others. "I'm absolutely thrilled with the result," said Grant Zazula, a paleontologist with the Yukon government in Canada who reviewed the study for the journal. "I've always been excited for the potential of something like this being successful." amina.khan@latimes.com

Indian man single-handedly plants a 1,360-acre forest A little more than 30 years ago, a teenager named Jadav "Molai" Payeng began burying seeds along a barren sandbar near his birthplace in northern India's Assam region to grow a refuge for wildlife. Not long after, he decided to dedicate his life to this endeavor, so he moved to the site so he could work full-time creating a lush new forest ecosystem. Incredibly, the spot today hosts a sprawling 1,360 acres of jungle that Payeng planted — single-handedly. The Times of India recently caught up with Payeng in his remote forest lodge to learn more about how he came to leave such an indelible mark on the landscape. It all started way back in 1979, when floods washed a large number of snakes ashore on the sandbar. One day, after the waters had receded, Payeng, only 16 then, found the place dotted with the dead reptiles. "The snakes died in the heat, without any tree cover. "We're amazed at Payeng," says Gunin Saikia, assistant conservator of Forests. Related stories on MNN:

A New Dawn 13th Jun 2013; 13:00 Listen to the audio (full recording including audience Q&A) Please right-click link and choose "Save Link As..." to download audio file onto your computer. There will an edited high-res video version of the talk available in a couple of weeks time, and if you subscribe to our channel on YouTube - you'll get automatically notified whenever there's a new video. RSA Thursdays Award-winning Hollywood film producer Simon Lewis’ life was turned upside down when a serious car accident left him severely injured. In a special talk at the RSA, Simon Lewis shares his remarkable personal story of recovery, and explores what he sees as society’s most urgent problem - the many threats to learning and consciousness - revealing what is already possible to nurture minds and change lives. Speaker: Simon Lewis, film and television producer and author of Rise and Shine Chair: Dr Suzy Walton, RSA Trustee

DNA has a 521-year half-life M. Møhl Palaeogeneticist Morten Allentoft used the bones of extinct moa birds to calculate the half-life of DNA. Few researchers have given credence to claims that samples of dinosaur DNA have survived to the present day, but no one knew just how long it would take for genetic material to fall apart. After cell death, enzymes start to break down the bonds between the nucleotides that form the backbone of DNA, and micro-organisms speed the decay. Determining that rate has been difficult because it is rare to find large sets of DNA-containing fossils with which to make meaningful comparisons. But palaeogeneticists led by Morten Allentoft at the University of Copenhagen and Michael Bunce at Murdoch University in Perth, Australia, examined 158 DNA-containing leg bones belonging to three species of extinct giant birds called moa. By comparing the specimens' ages and degrees of DNA degradation, the researchers calculated that DNA has a half-life of 521 years.

Global Philosophy: Ashok Gangadean at TEDxWilmington The Promise and Pitfalls of Resurrection Ecology Every species becomes extinct eventually. Some leave descendants that continue the evolutionary proliferation of life that kicked off on this planet over 3.5 billion years ago, but no parent species is immortal. Life on Earth is in continual flux, with new lineages emerging as others die back. But what if we could resurrect lost species? The woolly mammoth – the shaggy Ice Age icon that persisted until a scant 3,700 years ago – is probably the most charismatic “deextinction” candidate. These candidate species, the “Revive & Restore” project says, were selected according to three sets of criteria. Just as the woolly mammoth symbolizes the great hope of species revival, the proboscidean also highlights the lack of attention ecology receives in such proposals. Let’s say that scientists are able to clone a woolly mammoth within their ambitious five year time frame. The long-fanged gape of Smilodon, on display at the Page Museum. Of course, the Ice Age megamammals are extreme examples.

Theory U Scientists Clone Long-Dead Animal Astounding even veterans of the fight against animal extinction, cloning technology has reproduced two endangered wild cattle bulls, each born to dairy cows last week on an Iowa farm. The procedure that created the bantengs has given animal conservationists hope that cross-species breeding can help reverse the daily disappearance of 100 living species and add genetic diversity to dwindling animal populations. If they survive, the two bantengs will be transferred to the San Diego Wild Animal Park and encouraged to breed with the captive population there. The technology is still fraught with problems and a long way from paying significant dividends. Nonetheless, animal conservationists are excited about the two unnamed bantengs. "The fact that it can happen at all just astounds me," said Oliver Ryder, a geneticist at the San Diego Zoo's Center for Reproduction of Endangered Species. This is not the first cross-species cloning experiment that resulted in a birth. Copyright 2003 CBS.

OverviewSentinel Mission | Sentinel Mission The spacecraft and instrument use high-heritage flight proven deep space systems, originally developed by NASA, to minimize technical and programmatic risks. These heritage missions include large space-based telescopes (Spitzer, Kepler), a large format camera made up of many individual detectors (Kepler), and a cryogenically cooled instrument (Spitzer). By detective and tracking nearly all of the Near Earth Objects greater than 50 meters in diameter, the Sentinel Space Telescope will create a map of the solar system in Earth’s neighborhood enabling future robotic and manned exploration. The data provided by Sentinel will also identify objects that are potentially hazardous to humans to provide an early warning to protect the Earth from impact. Features - Most capable NEO detection system in operation - 200 deg anti-sun Field of Regard, with a 2×5.5 deg Field of View at any point in time: scans 165 square degrees per hour looking for moving objects Benefits

How to Bring Back the Woolly Mammoth (Infographic) These are the steps that could, theoretically, allow an Asian elephant to give birth to a hybrid woolly mammoth, which could eventually breed with other hybrids to produce an animal that closely resembles the extinct species. A number of scientific hurdles, described below, still need to be overcome to make this a reality. 1. 2. 3. 4. 5. 6. 7. Embed: Paste the code below into your site. <a href=" alt="Infographic: How scientists plan to engineer woolly mammoths out of elephants." src="

Resurrecting the Extinct Frog with a Stomach for a Womb Two years ago, Mike Archer from the University of New South Wales looked down a microscope and saw that a single fertilised frog egg had divided in two. Then, it did it again. And again. “There were a lot of hi-fives going around the laboratory,” says Archer. This might seem like an over-reaction. The fact that it started to grow into an embryo was a big deal. Archer’s goal is simple: To bring the extinct gastric brooding frog back from oblivion and, in doing so, provide hope for the hundreds of other frogs that are heading that way. Frozen southern gastric brooding frog. Stomach for a womb The southern gastric brooding frog (Rheobatrachus silus) was discovered in 1972 in the mountains of Queensland, Australia. Simply put, the mother frog converts her stomachs into a womb. When news broke about this weird strategy, other scientists were incredulous. It took many years, field surveys and photographs to persuade the naysayers. They didn’t have long. Then, good news! Cloning Lazarus