Learn to Code for Free With These 10 Online Resources 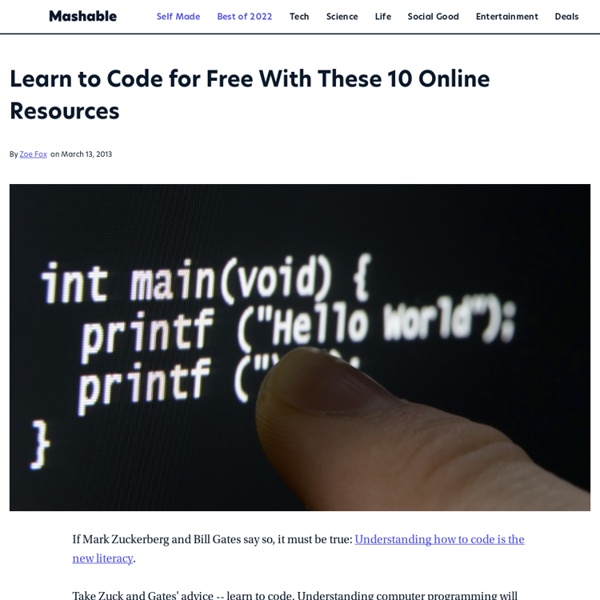 If Mark Zuckerberg and Bill Gates say so, it must be true: Understanding how to code is the new literacy. Take Zuck and Gates' advice — learn to code. Understanding computer programming will open doors to new jobs and opportunities. But you're probably thinking, where do I even begin? Fortunately for you, there are loads of ways to learn coding online, without paying a thing. We've rounded up 10 places on the web that teach coding through video tutorials, games and quizzes. Homepage image courtesy of iStockphoto, bmcent1

Graduates to be offered £20,000 to train as computer science teachers The education secretary, Michael Gove, said in January that information and communications technology teaching must be radically revamped to prepare pupils for the future. Photograph: Oli Scarff/Getty Images Graduates are to be offered £20,000 scholarships to train as computer science teachers in an initiative launched by the government and backed by companies including Microsoft and Facebook. The move is part of a package of reforms aimed at overhauling computer science education, giving children the skills to write programs rather than simply focusing on word processing skills. The education secretary, Michael Gove, announced on Friday that current information and communications technology teacher training courses will be axed from next year. Teachers and industry leaders are concerned that the way ICT is currently taught in schools leaves children bored and learning little beyond the most basic digital skills.

Brave NUI World - Chapter 15 - Touch versus In-Air Gestures Summary Technologies inhabit an ecological niche, in that each represents a set of potential uses and markets. Just as those who failed to understand the true utility of touch input predicted the death of the mouse and keyboard, new technologies, such as Xbox Kinect and the Sony EyeToy, that offer touchless gesture input might incorrectly be believed to be a replacement for touch and touch gestures. Certainly, devices that enable users to gesture in air open a seemingly all-new world of interaction potential. Publisher Summary This chapter focuses on the differences and similarities between touch and in-air gestures. Author Keywords Touch input without the touch; in-air gesture design; in-air gestures are the same as touch gestures; in-air gestures are nothing like touch gestures Copyright © 2011 Elsevier Inc.

General Assembly launches Dash, a Codecademy-style site that teaches you to code General Assembly launched today a new service designed to help get more people to take advantage of its Web Development courses. Called Dash, users will be able to take courses in HTML, cascading stylesheets, and Javascript right in their browser. It follows in line with what other services like Codecademy, Coursera, and others are doing in the computer programming education space. We interviewed General Assembly’s co-founder and Chief Product Officer Brad Hargreaves who told us that initially Dash was meant to help its students get started in its immersive programs. Interested users can sign up for the service using their Twitter account or email. After successfully authenticating, users can opt to undertake one of four projects, each one more complicated than the last ranging from building a simple website to creating a CSS-powered robot. Just like what you have with Codecademy, Dash’s lessons guides you through the process. Dash is free to use and anyone can sign up for an account.

7 Apps for Teaching Children Coding Skills It's hard to imagine a single career that doesn't have a need for someone who can code. Everything that "just works" has some type of code that makes it run. Coding (a.k.a. programming) is all around us. That's why all the cool kids are coding . . . or should be. Programming is not just the province of pale twenty-somethings in skinny jeans, hunched over three monitors, swigging Red Bull. If you're concerned that that a) elementary school students don't have the ability to code, b) there's no room in the curriculum, and c) you don't possess coding chops to teach programming skills, throw out those worries. In no particular order, we have listed all the coding apps that are appropriate for young learners. GameStar Mechanic Platform: WebCost: $2 per student GameStar Mechanic teaches kids, ages 7-14, to design their own video games. Scratch Platform: WebCost: Free! Tynker Platform: WebCost: Free! Move the Turtle Hopscotch Platform: iPadCost: Free! Daisy the Dinosaur Platform: iPadCost: Free!

university lectures computer science Whether your goal is to earn a promotion, graduate at the top of your class, or just accelerate your life, lectures can help get you there. Our archives of lectures cover a huge range of topics and have all been handpicked and carefully designed by experienced instructors throughout the world who are dedicated to helping you take the next step toward meeting your career goals. Lifelong learns can turn their free time turn into self-improvement time. The online lectures on this list are more than lecture notes or a slideshow on a topic -- they were designed for audiences like you, with carefully sequenced themes and topics taught by veteran educators, and often with additional resources for your own independent study. Lecture courses are a valid and vital learning tool, and may be one of the best methods of learning available.

7 Blogs You Should Really Read If You Are A Student Programmer If you want to succeed as a programmer, you need to immerse yourself in the programming culture. This is more true if you’re still a pupil. The field of programming is so broad and there’s so much information to absorb that you’ll never come out on top if you participate from a distance. Fortunately, blogs are a readily accessible medium keep you in the loop. Just to be clear, these programming blogs are NOT meant to replace hands-on practice or proper instruction. Joel on Software Joel on Software is one of the most incredible resources for any aspiring software developer. For your benefit, Joel has a clear list of his “Top 10″ articles for easy browsing. Unfortunately, having retired last year, Joel no longer writes new articles to the site. Coding Horror Coding Horror is an actively maintained half-personal blog by an experienced web and software developer, Jeff Atwood. The blog posts have evolved over many years and the focus of the blog itself has evolved with them. Gamasutra

Best Programming Languages Beginners Should Learn Computer science is a booming industry in the US — and it pays extremely well. There's always demand for sharp, talented engineers, which is why learning how to code can seem like an attractive option. But, as is the case with any new skill, it can be difficult to know where to start. Before you learn a language, start with 'drag and drop' programming. "Drag and drop" programming is a basic technique that allows you to build code by dragging and dropping blocks or some other visual cue rather than manually writing text-based code. It makes it easy to understand the basics of programming without getting caught up in meticulous character placement, according to Hadi Partovi, co-founder of a website that offers online coding courses called Code.org. "Once you've learned the basic concepts using drag and drop, you'll immediately want to learn [how to] do the real thing," Partovi said to Business Insider. Python is one of the easiest languages to start with.

Which of these top 20 programming languages should your school teach? By Frank Evans January 20th, 2015 One IT expert and educator discusses the how and why of choosing the right programming language “Always code as if the guy who ends up maintaining your code will be a violent psychopath who knows where you live.” -John Woods Way back in the 1970s, working as a computer programmer was quite prestigious, and if you wanted to get into computer programming, your potential employer would more often than not put you through a batch of aptitude tests in order to determine your suitability: even if you had a degree. Nowadays, programming is more widespread and you don’t need a degree to be a programmer; it’s no longer mainly for scientists and engineers: students studying the humanities, English as a foreign language students, people building websites, and a whole host of other folks are learning to program. The most important question on people’s minds will probably be, “What programming language(s) do I need to learn?”

A new kind of school tackles the software engineering talent shortage Is a computer science degree worth the trouble? What about IT certification? You can argue about these issues for forever and a day, but one thing everyone in tech agrees on: There's not enough software engineers. It's only going to get worse. By 2020, the US Bureau of Labor estimates that there will be 1.4 million new developer job openings and only 400,000 computer science graduates to fill them. A group of industry veterans from Apple, Docker, LinkedIn, and Yahoo decided to start a new hands-on education program called the Holberton School for training software engineers. Anyone can apply from ages 18 to 128. The Holberton School is an alternative to college, online courses and coding boot-camps. Holderton School will be using France's European Institute of Technology as its model. Who's going to pay for all this? The school's cash comes from a $2 million seed round. Why would a VC invest in a school? Applications are open now for the inaugral January class.