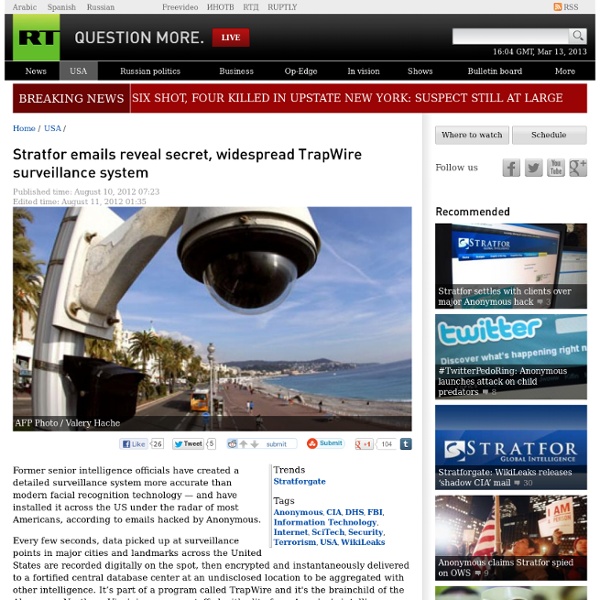 An Interview with Richard "Hollis" Helms, Founder and CEO, Abraxas Corp. // The Entrepreneur Center @ NVTC Not to be confused with the other Richard Helms (who headed the CIA under Nixon), “Hollis” Helms was with the CIA for nearly 30 years until October 1999, including 12 years overseas in several postings in the Mideast and South Asia. He was also one of the original assignees to its Counter Terrorism Center in the mid-1980s. He started Abraxas Corp. four years ago. Bisnow on Business: This is some retirement – you left the government and became an entrepreneur. So what does Abraxas do exactly? Who would use you for what? What’s the deliverable? Choosing to put your own money up first is a risk. So you don’t believe that early money is like yeast? You really draw from the early entrepreneurial spirit of aviation. You have a product with an intriguing name: TrapWire. Is TrapWire a service or a product, or what does it look like exactly? You were the only employee at the beginning, and now you've grown to over 200. What do you think of advisory boards? Which was? What does Abraxas mean?

why is the company called “abraxas”, why is the boss’s nickname “hollis”, why why why « Niqnaq To tell you the truth, I was having to fill out a Virginia state incorporation form, and I went into the living room and said, “Quick, give me a name. I don’t want to be one of these companies named after myself.” And my daughter was reading a book of mythology. Only later did I realize Abraxas was also the name of a hard rock band, and a Santana album. - “Hollis” Helms (no relation) Stratfor emails reveal secret, widespread TrapWire surveillance systemRussia Today, Aug 10 2012 Former senior intelligence officials have created a detailed surveillance system more accurate than modern facial recognition technology and have installed it across the US under the radar of most USAians, according to emails hacked by Anonymous. At the same time, however, WikiLeaks was relentlessly assaulted by a barrage of DDoS attacks, crippling the whistleblower site and its mirrors, significantly cutting short the number of people who would otherwise have unfettered access to the emails. God Bless USAia.

Everything You Need to Know About TrapWire, the Surveillance System Everyone Is Freaking Out About Just FYI, having waded through about a metric shit ton of conspiracy theories about TrapWire over the weekend, I think you've got it wrong when you say people are freaked out because they believe TrapWire was "secret." Pretty much every report I've read — including from the "I wear a platinum shield to bed" set — has had links to the very public patents and other documentation of TrapWire. What's freaking people out: 1) Bizarre, incorrect claims about facial recognition; and 2) Not-so-bizarre and potentially interesting claims about the fact that private CCTVs are now networked into a national surveillance system. The question with 2) is whether you have a reasonable expectation of privacy in, say, a private building with CCTVs whose feeds you think will never go beyond the doorman. If you DO have that expectation of privacy, and a court finds it "reasonable," but the government is tapping into that feed, that's a problem.

TrapWire The report which is available as a 3.5MB pdf which places Australia in second place, behind America, but ahead of China in cyber capabilities. The report is written by Tobias Feakin, Jess Woodall and Klée Aiken and published through Australian Strategic Policy Institute, or the ASPI. It reads more like a score card, the same criteria is marked off against each country in a tabulated format. This then gives a ranking from highest to lowest. Throughout the criteria the most common flaw seems to be out dated or poorly maintained infrastructure which is impeding the internet access to a population. Some countries receive high praise for scoring in the eighty percents as others are relegated to “poor” and “disconnected”. What the report fails to highlight is the difference between internet subscriptions and mobile phones connected to the internet, or is this a statistical trick, often used to make things seem more than what they really are…? Like this: Like Loading...

Sinaloa Cartel Operative Jesus Vincente Zambada Niebla Makes Explosive Allegation About Operation ‘Fast and Furious’ A high-ranking Mexican drug cartel operative currently in U.S. custody is making startling allegations that the failed federal gun-walking operation known as “Fast and Furious” isn’t what you think it is. It wasn’t about tracking guns, it was about supplying them — all part of an elaborate agreement between the U.S. government and Mexico’s powerful Sinaloa Cartel to take down rival cartels. The explosive allegations are being made by Jesus Vicente Zambada-Niebla, known as the Sinaloa Cartel’s “logistics coordinator.” He was extradited to the Chicago last year to face federal drug charges. Jesus Vicente Zambada-Niebla (Source: MSNBC) Zambada-Niebla claims that under a “divide and conquer” strategy, the U.S. helped finance and arm the Sinaloa Cartel through Operation Fast and Furious in exchange for information that allowed the DEA, U.S. “Congress won’t get involved in really any criminal case until the trial is over and the smoke has cleared,” he added. “Classified Materials”

Combat Zones That See Combat Zones That See, or CTS, is a project of the United States Defense Advanced Research Projects Agency (DARPA) [1] whose goal is to "track everything that moves" in a city by linking up a massive network of surveillance cameras to a centralised computer system.[2] Artificial intelligence software will then identify and track all movement throughout the city.[3] CTS is described by DARPA as intended for use in combat zones, to deter enemy attacks on American troops and to identify and track enemy combatants who launch attacks against American soldiers.[2] Civil liberties activists and writers of dystopian fiction believe that such programs have great potential for privacy violations, and have openly opposed the project.[2][4][5] See also[edit] References[edit] External links[edit]

Top 5 Stratfor Wikileaks Revelations (So Far) This week, Wikileaks began publishing the first of some five million hacked emails from the private intelligence firm, Stratfor, which cultivates anonymous sources in governments and business in order to provide intelligence assessments on a variety of matters to paying clients. Many of the emails are mundane and not particularly insightful, while others, if accurate, are more revelatory. Based on my readings of all the emails released thus far, here are the five most interesting: #5. Sharif Mobley wasn’t in Al Qaeda, despite media claims. The real story here isn’t so much about Mobley himself, but what it says about the American media. Money quote: “Heard from a very reliable source close to the folks who debriefed Mobely that the dude’s a] bat shit crazy; and b] he's going to die here.” #4. #3. Money quote: “The Mexican government is now paying some $25m for UAVs from Israel. #2. #1. Money quote: “God knows how many years were wasted chasing the sob in the tribal belt.”

VIRAT Concept diagram of the VIRAT system, from the DARPA project solicitation[1] The Video and Image Retrieval and Analysis Tool (VIRAT) program is a video surveillance project funded by the Information Processing Technology Office (IPTO) of the Defense Advanced Research Projects Agency (DARPA).[2][3][4] The purpose of the program was to create a database that could store large quantities of video, and make it easily searchable by intelligence agents to find "video content of interest" (e.g. "find all of the footage where three or more people are standing together in a group") -- this is known as "content-based searching". [1] The other primary purpose was to create software that could provide "alerts" to intelligence operatives during live operations (e.g. The focus of VIRAT is primarily on footage from UAVs such as the MQ-1 Predator. Diagram of example operation using VIRAT system, (from the DARPA project solicitation[1]) The DARPA program manager for the VIRAT project is Dr. See also[edit]

Forget PRISM: FAIRVIEW is the NSA's project to "own the Internet" According to Thomas Drake, a former National Security Agency senior executive who blew the whistle on the agency’s reckless spending and spying in 2006, a previously unknown NSA surveillance program known as FAIRVIEW aims to “own the Internet.” Last month, former NSA contractor Edward Snowden leaked a series of PowerPoint slides to the Washington Post and the Guardian revealing that the agency was engaged in a large-scale Internet surveillance program, dubbed PRISM, that collects Americans’ chats, emails, photos, and videos. One of the slides, only later released by the two papers, made reference to a group of additional “upstream” collection programs, including two named FAIRVIEW and BLARNEY, but gave no further details about their function. Drake, who was prosecuted under the Espionage Act for his whistleblowing, explained the upstream programs to the Daily Dot. “Upstream means you get inside the system before it’s in the Internet. Illustration by Fernando Alfonso III

Privacy and Security Fanatic: Rise of the AI Overlord: Machines monitor, automatically detect suspicious behavior When it comes to monitoring CCTV video feeds for suspicious activity, the human brain reportedly overlooks 45% of all activity after 12 minutes. After 22 minutes, the human brain overlooks 95% of all activity. But what if all the 45 - 60 million eye-in-the-sky cameras were connected to computers with artificial intelligence . . . computers with an extraordinary AI brain that can see, learn, get smarter with time, and make decisions on what behavior recognition threats to report in real-time? While TrapWire seems to use "behavioral recognition" to analyze video and camera feeds, a "video camera on its own is dumb." Most video analytics are rule-based logic systems that continually need the rules redefined, can give hundreds of false-alarm alerts, and even miss true threats in real-time. "We are seeing more and more surveillance cameras installed everywhere, and increasingly they are being networked together.

AFRL's Gotcha Radar to Widen Stare "Gotcha" is the cute name for an experimental system that collects vast amounts of synthetic-aperture radar data from an aircraft circling an urban area and processes it into 3D video for real-time surveillance and forensic analysis. Now the US Air Force Research Laboratory is looking to identify potential sources for a Gotcha Spiral 2, a dual-band (X/UHF) radar system capable of staring at a city-sized area 10-20km in diameter and downlinking the data for ground processing. The key behind Gotcha is that data are collected in a single radar mode, then processed in a supercomputer to produce a range of products, including "super-resolution" 2D imagery, 3D video, ground moving-target indication and coherent change detection. Imagery can be viewed in near real-time, or an analyst can backtrack through the store of radar data to find out what led up to an event.