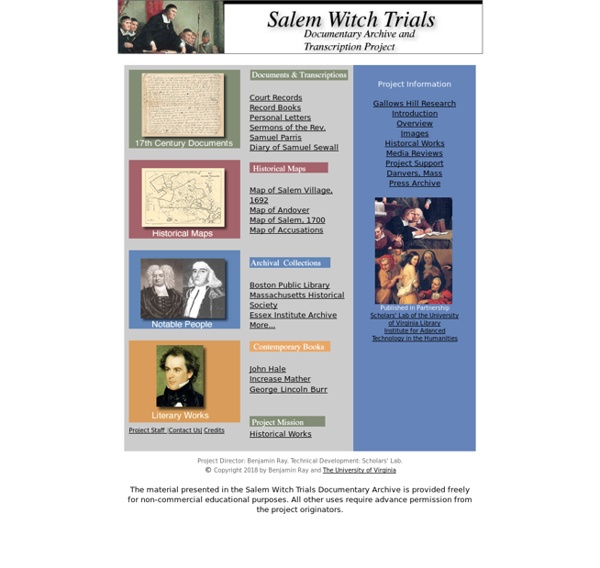 You Are There <div style="padding:5px; font-size:80%; width:300px; background-color:white; margin-left:auto; margin-right:auto; border:1px dashed gray;"> Internet Archive's<!--'--> in-browser audio player requires JavaScript to be enabled. It appears your browser does not have it turned on. Please see your browser settings for this feature. </div>

North Berwick witch trials - Union of Crowns to Union of Parliaments In 1590 James VI presided over a witchcraft trial. James became personally involved in this particular trial because he believed that Francis Stuart, 5th Earl of Bothwell, had plotted with a coven of witches to bring about his destruction. While sailing to Scotland to marry James, Anne of Denmark’s ship had met with trouble and James went to rescue her. On their return, their ship was nearly capsized in stormy seas. Salem witch trials The central figure in this 1876 illustration of the courtroom is usually identified as Mary Walcott. Twelve other women had previously been executed in Massachusetts and Connecticut during the 17th century. Despite being generally known as the Salem witch trials, the preliminary hearings in 1692 were conducted in several towns: Salem Village (now Danvers), Salem Town, Ipswich, and Andover. The most infamous trials were conducted by the Court of Oyer and Terminer in 1692 in Salem Town.

History Detected - May/June 2013 Give kids original source material, teach them how to weigh evidence and defend their conclusions, and they'll shine in class—and as citizens. In the 1986 comedy Ferris Bueller's Day Off, Ben Stein famously plays a high school teacher who drones on about the 1930 Smoot-Hawley Tariff Act while his students slump at their desks in a collective stupor. For many kids, that's history: an endless catalog of disconnected dates and names, passed down like scripture from the state textbook, seldom questioned and quickly forgotten. Now take a seat inside Will Colglazier's classroom at Aragon High School in San Mateo. The student population here is fairly typical for the Bay Area: about 30 percent Latino, 30 percent Asian and 40 percent white.

How to bury a witch 28 October 2014Last updated at 06:01 ET By Louise Yeoman BBC Scotland Fife Council archaeologist Douglas Speirs uncovered the Torryburn slab Back in 1704, in Torryburn on the south west Fife coast, they had a problem disposing of toxic material - it was what you might call a toxic witch problem. Lilias Adie, a poor woman who confessed to being a witch and having sex with the devil, died in prison before she could be tried, sentenced and burned. So they buried her deep in the sticky, sopping wet mud of the foreshore - between the high tide and low tide mark - and they put a heavy flat stone over her.

Curandero - Wikipedia Curandera performing a limpieza in Cuenca, Ecuador A curandero (Spanish: [kuɾanˈdeɾo], f. curandera) or curandeiro (Portuguese: [kuɾɐ̃ˈdejɾu], f. curandeira) is a traditional Native healer, shaman or Witch doctor found in the United States and Latin America. The curandero dedicates their life to the administration of remedies for mental, emotional, physical and spiritual illnesses based on their evaluation.[1][2][3][4] The role of a curandero or curandera can also incorporate the roles of psychiatrist along with that of doctor and healer. Some curanderos, such as Don Pedrito, the Healer of Los Olmos, make use of simple herbs, waters, and even mud to effect their cures. Others additionally employ Catholic elements, such as holy water and saint pictures. The use of Roman Catholic prayers and other borrowings and lendings are often found alongside native religious elements.

Witches' Ladder: the hidden history Chris Wingfield, Researcher 'The Other Within' project When a string of feathers was found in a Somerset attic alongside four brooms, suspicions of witchcraft began to fly. This hint of rural magic and superstition captured the imagination of the Victorian folk-lore community, however not everyone was convinced. Brujería - Wikipedia Brujería is the Spanish-language word for "witchcraft". Brujería also refers to Practice-healers in the Americas (especially African Americans and the United States). Both men and women can practice; brujo(s) and bruja(s), respectively. Etymology[edit] There is no sound etymology for this word, which appears only in Portuguese, Spanish, Catalan, and Galician (other romance languages use words derived from Latin strix, -igis, originally an owl).

For Teachers - Women's History Month (Library of Congress) Put the power of primary sources to work in the classroom. Browse ready-to-use lesson plans, student activities, collection guides and research aids. The Library of Congress Old Bailey Online - The Proceedings of the Old Bailey, 1674-1913 - Central Criminal Court Palo (religion) - Wikipedia The word "palo" ("stick" in Spanish) was applied to the religion in Cuba due to the use of wooden sticks in the preparation of altars, which were also called "la Nganga", "el caldero", "nkisi" or "la prenda". Priests of Palo are known as "Paleros", "Tatas (men)", "Yayas (women)" or "Nganguleros". Initiates are known as "ngueyos" or "pino nuevo".