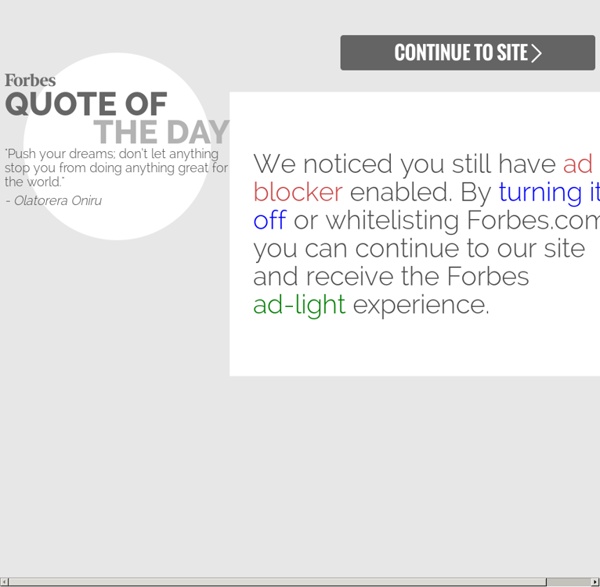 23 Tools and Resources to Create Images for Social Media Update – we launched Pablo a new tool to create beautiful images for your social media posts in under 30 seconds You can use Pablo right from the get-go, no need to login or create an account. Just quickly create amazing images super fast. You can try out the first version of Pablo right now – no login required. Just head to and give it a try! 10 Barriers to Great Leadership In the past few months, I’ve worked with several leaders who were navigating significant new challenges in their roles. The differences between those who managed these situations successfully and those who didn't often showed itself in their responses to these very common blocks to leadership growth. 1. Believing that it can't happen to you Every leader needs to be aware of things that might prevent, delay, or stop growth. To do this, you need to start with a couple of basic insights: that leadership growth is not inevitable and that certain things can stop or derail it.

Online business presentation software to create free, cool, animated, powerpoint video alternatives Sign up to Powtoon Already have an account? Log In Or Sign up with Google Sign up with Facebook more Five ways to identify future leaders We’re all leaders in some form. Whether by design or default, we use our influence to get others to follow us. That’s pretty well how leadership works – it’s all about influence. Using the art of influence is a skill that can take a lifetime to master.

Successful Leadership Skills For too long, we’ve thought of “hard skills” and “soft skills” as mutually exclusive. Hard skills are supposed to provide the value, and soft skills supposed to be subordinate, inferior, and all about feelings. Some frameworks of leadership reinforce this myth by encouraging positioning leaders as above the group and magically removed from doubt and anxiety. In reality, there is nothing “soft” about the skills needed to relate to people well enough to lead them. True leadership involves both hard skills and harder skills. Here’s what I mean. How Poor Leaders Become Good Leaders - Jack Zenger and Joseph Folkman by Jack Zenger and Joseph Folkman | 10:00 AM February 4, 2013 In our previous blog, Bad Leaders Can Change Their Spots, we described a group of 71 leaders who were able to elevate their leadership effectiveness from the 23rd percentile to the 56th percentile — that is, from being poor leaders to good ones. While many readers were impressed that it could happen, many more were curious (and even doubtful) about how it could happen. Admittedly, not every leader can do this. But all 71 of these individuals (who represented three-quarters of the entire group of poor leaders in this study) did accomplish this seemingly Herculean shift. How?

Leadership blunders to avoid A good deal of what we think we know for sure about leadership, and how good leaders behave, often turns out to be wrong. On Linked 2 Leadership, Leonard Doohan, a professor emeritus at Gonzaga University in Spokane, Wash., offers these fallacies about leadership to beware of: Leaders empower others Eight tips to sharpen your leadership game Rodger Dean Duncan, author of the recently published book Change-Friendly Leadership, has worked for the past 40 years as a leadership coach with a host of top executives, including U.S. cabinet members and CEOs of large companies. On Change This, he shares eight elements of their approach to strong leadership: 1. Relinquish power At company retreats, the usual ritual is that titles are supposed to be checked at the door. ‘We’ versus ‘I’: the language of leadership A former boss once felt it important to tell me that an accolade I received at work was not mine alone, but belonged to the entire team. I found this information puzzling, since I had already assumed that, and had always felt more inclined toward the “we” versus the “me.” The subtleties of language can easily escape us as we try to digest thousands of words every day, whether they’re spoken, printed or on a screen. Yet the way we use words affects our image, and can help or hinder advancement. In a business environment, there’s a language of leadership that remains more masculine in nature and an expectation persists that women must learn that language to get ahead.

What does it take to be a good team player? Are you a good team player? If you think the answer is yes, check to be sure, using these prerequisites drawn from the qualities that consultants Joel Garfinkle outlines on his Career Advancement blog and Marty Brounstein shares on Dummies.com: Always reliable This topped the list for both writers. Don't Hire the Right Person for the Job: or, Why Some Industries Can't Be Fixed from Within - Ray Fisman and Tim Sullivan Workers often choose professions known for a certain dark side -- in particular, violence and aggression -- precisely because they already exhibit those darker qualities. That's why broken cultures, from Wall St. to the gridiron, cannot be fixed from within. Reuters NFL players are taught to hurt people. They want to play the game at any cost.

Meeting Minutes - 10 Steps to More Effective Minutes : Blog By Gary Cohen on October 18th, 2012 He who keeps the meeting minutes controls the history of the meeting In meetings where there is no formal secretary, the convener will ask for a volunteer to take the minutes. Few, if any, hands will usually go up for this responsibility. It’s seen by some as a burdensome or perhaps undignified task. In fact, however, the minutes-taker has considerable power.