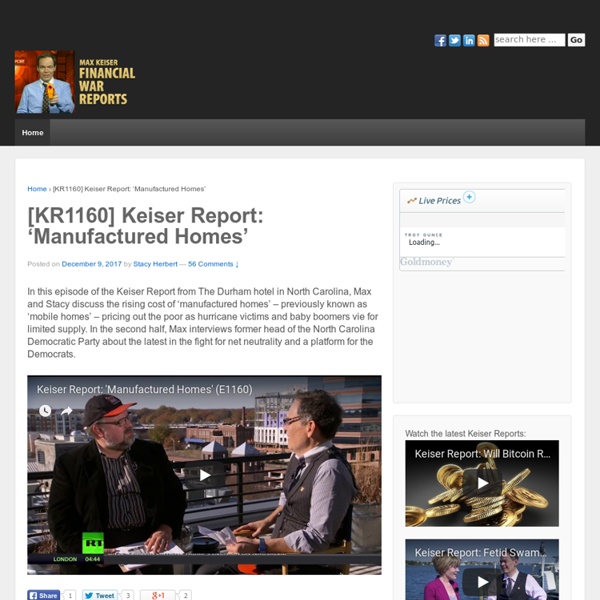 Agenda 21 Agenda 21 is Sustainable Development, and was created through the United Nations. It is the blueprint for depopulation and total control, under the banner of saving the environment. It is like the head of a beast that has thousands of tentacles, originating from the United Nations. The 3 primary tools that are used are: Man-made global warmingWater shortagesEndangered Species Act ‘Fiat money’ or Gold Standard? Written by David A. Jones (Guest Author) on . Many people, upon first learning about ‘Fractional Reserve’ Banking, are drawn to the idea of the Gold Standard.

YourLIVE! º Always There Sign up | Login Welcome Map Feed Details Download Help About Blog name @occupyamsterdam This week observes Independence Day in the United States. So it is highly appropriate that former Congresswoman Cynthia McKinney join me on the Solari Report to discuss our theme for the 2nd Quarter Wrap Up: what the US Constitution is, why it is so important, the devastating possibilities if it is changed, and the human future that is possible if we enforce it. Indeed, enforcing it is the US citizens’ sole remaining option. Unless we do so, the US war machine will run out of control – and it will continue to expropriate our assets and our lives, including the lives and futures of our children and those of billions of other people globally. For many years we have known that invisible forces have run our government from behind the scenes — not just in Washington, but also in state houses and municipalities. Money and violence are the heart of these issues.

Geithner: US has 'huge stake' in Euro crisis WASHINGTON (AFP) - US Treasury Secretary Timothy Geithner said Monday that America had a huge stake in helping Europe find a "more effective strategy" to tackle its financial crisis. Geithner, just back from a trip to Poland in which he reportedly expressed concern of a "catastrophic risk" to markets from the Greek debt crisis, said at the White House that Europe had the will to combat its challenges. "We have a huge stake as a country in helping them deal with those challenges.

Utopia of Usurers G.K. Chesterton reveals the most quietly held secret of the Liberal System, the “liberty” instituted as the foundation of the System, is for the benefit of the few and for the gradual impoverishment and enslavement of the rest. If the phrase, “in vino veritas” has been exponentially validated through the long ages of mankind, I would venture to say that anger, tinged with wrath, an anger that is not artificial, but, rather, spontaneous, is another deep wellspring of truth. YourLIVE! º Always There Sign up | Login Welcome Map Feed Details Download Help About Blog name Bill Bean is back on the show to talk about one of the most frightening encounters he has ever talked about. This makes the fiction in Hollywood seem tame by comparison as Bill talks about what one brave woman had to endure as she was possessed by demons. We then expand into the bigger picture... Anthony Patch & I get into AI, both the positives & the negatives of the technology. As with everything, there is two ways of looking at the rise of AI – dystopic nightmare or the answer to all of our problems.

US slams Iran at UN atomic agency meet VIENNA (AFP) - The United States took a renewed swipe at Iran Monday, telling the annual gathering of the UN atomic agency Tehran was creeping "still closer" to producing nuclear weapons-grade uranium. "Iran has continued to engage in a longstanding pattern of denial, deceit and evasion," US Energy Secretary Steven Chu told the 151-nation International Atomic Energy Association (IAEA) general conference in Vienna. He said a recent example of Iran's "provocative behaviour" was to begin installing facilities to enrich uranium, which can be used for nuclear power as well as atomic weapons, at an underground facility near Qom. "Expanding, and moving underground, its enrichment ... marks a significant provocation and brings Iran still closer to having the capacity to produce weapons grade uranium," Chu said, according to the text of his speech.