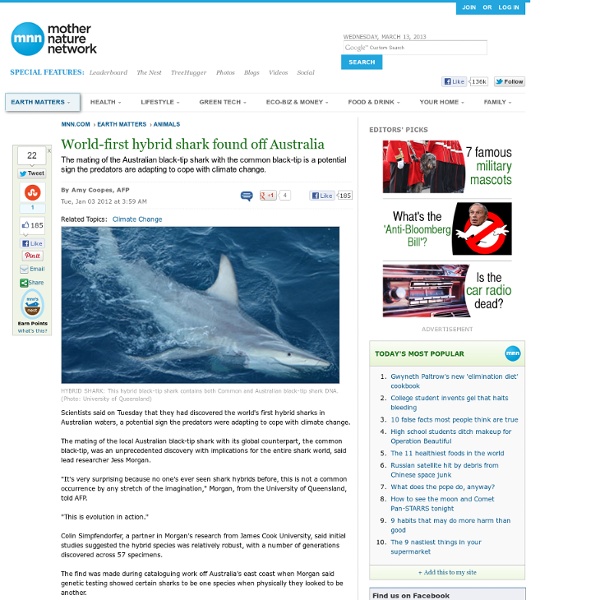 Scientists said on Tuesday that they had discovered the world's first hybrid sharks in Australian waters, a potential sign the predators were adapting to cope with climate change. The mating of the local Australian black-tip shark with its global counterpart, the common black-tip, was an unprecedented discovery with implications for the entire shark world, said lead researcher Jess Morgan. "It's very surprising because no one's ever seen shark hybrids before, this is not a common occurrence by any stretch of the imagination," Morgan, from the University of Queensland, told AFP. "This is evolution in action." Colin Simpfendorfer, a partner in Morgan's research from James Cook University, said initial studies suggested the hybrid species was relatively robust, with a number of generations discovered across 57 specimens. It means the Australian black-tip could be adapting to ensure its survival as sea temperatures change because of global warming.

Found: Whale thought extinct for 2 million years The pygmy right whale, a mysterious and elusive creature that rarely comes to shore, is the last living relative of an ancient group of whales long believed to be extinct, a new study suggests. The findings, published today (Dec. 18) in the Proceedings of the Royal Society B, may help to explain why the enigmatic marine mammals look so different from any other living whale. "The living pygmy right whale is, if you like, a remnant, almost like a living fossil," said Felix Marx, a paleontologist at the University of Otago in New Zealand. "It's the last survivor of quite an ancient lineage that until now no one thought was around." Living fossil The relatively diminutive pygmy right whale, which grows to just 21 feet (6.5 meters) long, lives out in the open ocean. The strange creature's arched, frownlike snout makes it look oddly different from other living whales. The findings help explain how pygmy whales evolved and may also help shed light on how these ancient "lost" whales lived.

The case for pardoning Ed Snowden One year ago today, the world learned that Ed Snowden, a 29-year-old contractor for the National Security Agency, was responsible for one of the biggest and most consequential disclosures of classified documents in US history. A few days later, Snowden departed Hong Kong for Latin America. But he wound up stranded in Russia after the US revoked his passport. Snowden is charged with three felonies for his unauthorized disclosure of NSA secrets, and just last month Secretary of State John Kerry demanded that Snowden "man up" and return to the United States to face trial. His disclosures were in the public interest But the government's continued pursuit of Snowden is a mistake. The Snowden disclosures were good for America The most important reason to pardon Snowden is that his disclosures were in the public interest. The Snowden documents revealed that the NSA was collecting information about every domestic phone call in the United States. "There’s no doubt that Mr.