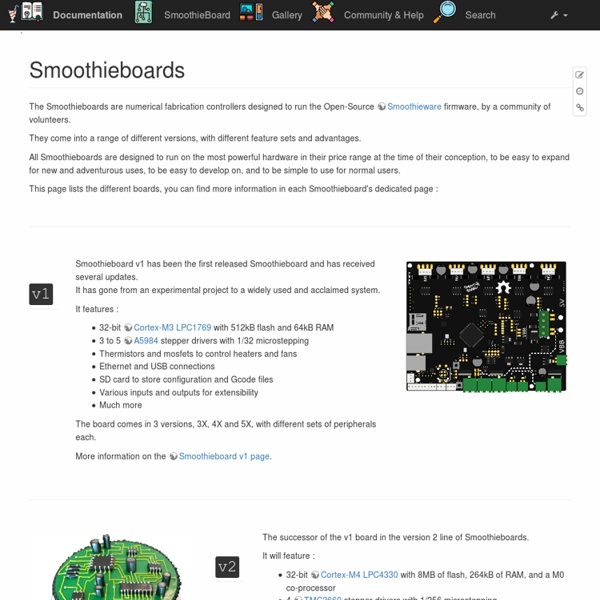 SmoothieBoard is an Open Source Hardware CNC controller board based on the LPC 1769 or LPC1768 Cortex-M3 chip. It is intended to run the Smoothie modular firmware ( GPL too ), and is targeted at 3D Printers, Laser cutters, CNC Mills, Pick and place and other small-sized CNC machines. Larger machines can be driven using external drivers. Get a Smoothieboard Status The Kickstarter for the 5 axis version of Smoothieboard has been completed and all of the rewards have been shipped. What can it be used for ? The Smoothie firmware is designed for maximum usefulness in mind. 3D printers, like repraps including extruder control, bed and hotend temp control.CNC mills, CNC lathes.Laser cutters And with more to come : laser engraving, SMT pick and place machine, foam cutter, delta robot, and anything else you care to imagine. Getting one You can now get a smoothieboard here. Features Microcontroller Stepper drivers Power outputs Power inputs Inputs 4 Thermistor ( ADC ) inputs.6 Endstop inputs. Extensibility

Review: Monoprice MP Select Mini 3D Printer 2016 is the year of the consumer 3D printer. Yes, the hype over 3D printing has died down since 2012. There were too many 3D printers at Maker Faire three years ago. 2016 Best 3D Printer Guide With over 1,000 different 3D printer models available on the market today, “Which 3D Printer should I buy?” is one of the most common questions we are asked at 3D Hubs. To answer this question, we reached out to our global community of 3D printing service providers to learn from their experiences and find out more about the 3D printers they own. With reviews from over 8,624 verified 3D printer owners having a collective 4,982 years of 3D printing experience, coupled with 1.14 million prints completed on 513 different 3D printer models, the result of our research is the 2017 3D Printer Guide – the most comprehensive 3D printer guide available. Together with our community, we investigated the following parameters to help measure the user experience of a range of 3D printers: print quality, build quality, reliability, ease of use, print failure rate, customer service, community, running cost, software, and value. In our 3D printer index you can find an overview of all reviewed 3D printers.

3D Printing for Mass Production A high-speed sintering 3D printer at work. Image: University of Sheffield Despite the fact that it can be used to make pretty much anything, 3D printing has already been pigeon-holed. In the public imagination, the technology belongs in a science museum, or sitting on some DIY hobbyist’s desk. When put to work in industry, it’s limited to whipping out a few prototype variations, one-off pieces, or parts that require only a very short print run. A8 Desktop 3D Printer Prusa i3 DIY Kit-213.24 Online Shopping Main Features:● Engineered to provide redefined usability, quality, performance ● Made from piano-black laser-cut acrylic frame. To maintain the garage-built feel and the handmade charm● It is unassembled DIY kit, provide you an unforgettable step-by-step learning experience of 3D printer from scratch.

PSMD (Pololu Stepper Motor Driver) Triple Axis Driver by tinkerings A drop-in replacement for the MakerBot stepper drivers that contains all three axes on one board. You can order these from my web site: Now you can also order these from Seeed Studio!: Updated: Now smaller (same height as a Gen4 stepper driver and 1/4" wider for 3X the axes), and with dip switches to configure microstepping. Also now has a motor-power-in (or 12V out) screw terminal that can be used to drive the motors on up to 35V.

Best RepRap Prusa i3 Kit (Fall 2016) - 3D Printer Buyer's Guide Looking for the best RepRap Prusa i3 kit? Read our guide to 33 Prusa i3 3D printer kits on the market in Fall 2016, including the Original Prusa i3 MK2. Don’t miss: Erik de Bruijn of Ultimaker reflects on 3D printing collaboration, sharing and the power of community Who’s Who in this 3D Printing Conversation Last week, Jeremy Simon of 3D Universe interviewed Erik de Bruijn of Ultimaker BV. Jeremy and Erik met at an e-NABLE conference at Johns Hopkins University last year, an experience that reflected their common interest in open sharing, collaboration and community. Erik de Bruijn is a co-founder of Ultimaker BV, launched in 2011. Ultimaker became an established brand in the 3D printing community within its first year, selling its flagship product, “Ultimaker”, to nearly 1000 people worldwide.

High-Torque Stepper Motor, Stepper Motor, Driver, Stepper Motor kit, DC Servo Motor, DC Servo Motor kit, Stepper Motor Power Supply, CNC Router, Spindle, and other Components. Stepper Motor #thZ7Q4# instructive prerequisites to buy trendy field of study Over the years, symbols such as the double G logo, the bar and bit belt buckle, the bamboo handle tote and the bold red and green stripe were worn by wealthy Americans and celebrities anxious to display fine Italian workmanship and equestrian details as status symbols for their wealth. So get ready for the city streets to be compared to forests with wild creatures lurking around, looking to tear the flesh off of Kaito's emo bones and drag his lifeless body into the shadows from whence they came. The translation reads very smooth, harsh in tone when it needs to be, with a glossary in the back that helps explain a lot of the cultural terms..

teams up with Microsoft HoloLens We are very excited to announce we’ve been working with Microsoft as an official partner of HoloLens, along amazing organizations such as NASA, Disney, Unity and Autodesk. The HoloLens was unveiled in January of this year. This device lets you bring virtual objects and scenes into your own environment, the best of both worlds between VR and AR. Alex Kipman presenting HoloLens partners on stage at Microsoft Build, picture by the Verge

Original Prusa i3 MK2 Multi Material Upgrade Release - Dual/Quad extrusion - Prusa Printers So 3D printing has pretty much been the same for the last couple of years. The technology is here and as I already said for many times, everyone (I can vouch only for me though) should be trying to make it as user friendly as possible. Sometimes it is difficult to explain this philosophy to 3D printing newcomers. We are making things which already exist better.

How to Find the Center of a Delta 3D Printer Getting started with the x5 The x5 is programmed only with a bootloader. The actual program is loaded from the memory card after a reset. All that is necessary to update or roll back the firmware is to replace/rename the file in the root directory of the SD memory card. What you'll need Micro SD card, 2 GB is enough Mini B USB cable Heat sink (included with the x5) Jumpers (included with the x5) DIY 3D Printer Electronic Parts For Sale Open source v3 USB AVR programmer and SPI interface Works with AVRdude AVRStudio compatible for use with Windows, Linux, and Mac OS X Based off of the USBtiny design that has been improved to use the SpokePOV interface Includes:

Post Processing PLA and ABS Prints! - Pinshape Blog In an ideal world, 3D prints would all come out of our printers ready to go. But, as anyone with a 3D printer knows, this is not always the case, and at some point most of us will find ourselves trying to seamlessly remove supports from our prints without leaving an uneven surface on our prints. We’ve got some tips on how to avoid the struggle of removing supports and fly-away material to help in post processing PLA and ABS 3D prints.