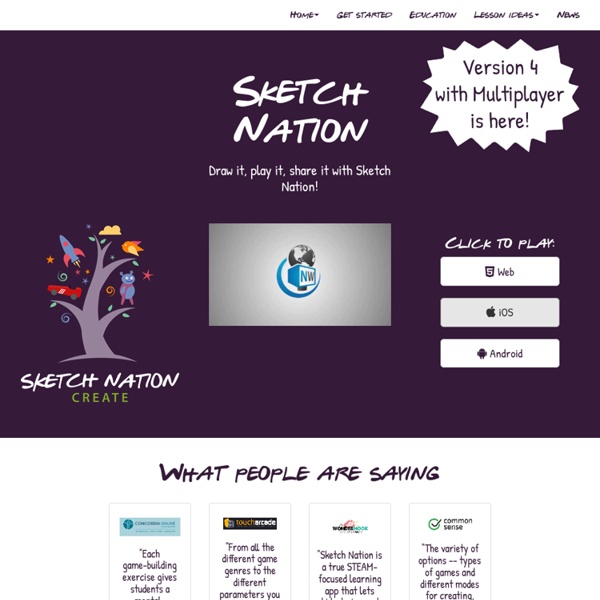 Kids Code the Darndest Things: 10 Amazing Youth Innovators Kids deserve more credit than they get. They're observant, incredibly intuitive and can sometimes figure out what the world needs faster than adults can. With rapid advancements in technology, and coding education geared toward youth, it comes as no surprise that there are kids pushing innovation out there, and creating apps and programs at astonishingly young ages. Here are 10 youth innovators, from ages seven to 15, particularly worth noting and working on projects ranging from games to anti-bullying apps. 1.

Nearpod Blog This post was previously published on Megan Endicott’s blog, Endicott Spot. Finding ways to maximize the potential of every moment of class time, reach each and every student, and engage them in a meaningful activity seems like the most difficult task in the world. Luckily, the team at Nearpod is consistently working to improve their product to reach learners of all ages and abilities in ways that inspire imagination and curiosity. As a member of the Fulton County Vanguard team, I have the opportunity to work with the teachers in my elementary school as a coach to seamlessly integrate technology into the classroom. Nearpod is the tool my teachers gravitate toward, from kindergarten through fifth grade.

Digital Nativism Prensky's Digital Nativism With an insulting tone worthy of the original American nativists who hated immigrants (especially Catholic ones), Marc Prensky speaks of pre-iPod humans (digital immigrants) contemptuously. (Prensky's work) Pre-writing - Inspired Writing Padlet.com - How To Video Build a Wall to: generate topics to write about, starter sentences, small moments, interesting adjectives.... Include images, links, video to better describe/explain what you added to the community wall. Use this tool for any or all the parts of the writing process to capture your notes and/or media. Use it to show sequence of events in a story (first, second, third...). Try it as a whole class "Word of Day using it in a sentence".

StarLogo TNG Version 1.5. Download it here Curriculum Materials HERE StarLogo TNG is The Next Generation of StarLogo modeling and simulation software. While this version holds true to the premise of StarLogo as a tool to create and understand simulations of complex systems, it also brings with it several advances - 3D graphics and sound, a blocks-based programming interface, and keyboard input - that make it a great tool for programming educational video games.

Create Your Own Game – 7 Sites that let you create games online By: Abbas+ July 8, 2008 Create your own games online with few clicks. For those of you who always wondered how do people create those games where Bush is punching Kerry or Bush Dancing? here are 7 online resources which will let you create your own games instantly. All of these sites offer flash based games creation. What is Kodu An overview of Kodu. (Click to play) Kodu lets kids create games on the PC and Xbox via a simple visual programming language. Kodu can be used to teach creativity, problem solving, storytelling, as well as programming.