Crowd Computing and The Synaptic Web 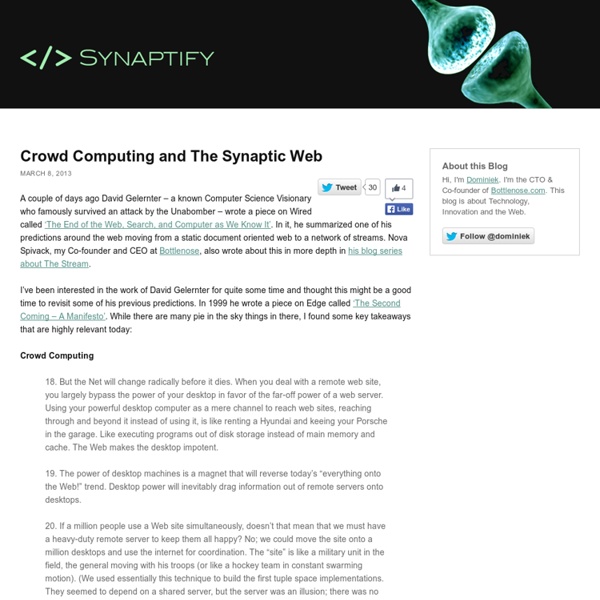 A couple of days ago David Gelernter – a known Computer Science Visionary who famously survived an attack by the Unabomber – wrote a piece on Wired called ‘The End of the Web, Search, and Computer as We Know It’. In it, he summarized one of his predictions around the web moving from a static document oriented web to a network of streams. Nova Spivack, my Co-founder and CEO at Bottlenose, also wrote about this in more depth in his blog series about The Stream. I’ve been interested in the work of David Gelernter for quite some time and thought this might be a good time to revisit some of his previous predictions. In 1999 he wrote a piece on Edge called ‘The Second Coming – A Manifesto’. While there are many pie in the sky things in there, I found some key takeaways that are highly relevant today: Crowd Computing 18. In order to make software and apps more intelligent, there is a vast amount of computation that needs to be done. Bottlenose Crowd Computing Layer New Metaphors 28. 41.

Synaptic Web Stay updated about the Synaptic Web on Twitter via @SynapticWeb The Synaptic Web By Khris Loux, Eric Blantz, Chris Saad and you... Stop Bullshitting Yourself If You Want To Wake Up (From The True Matrix) I’m trying to free your mind Neo. But I can only show you the door. You’re the one who has to walk through it.— Morpheus, The MatrixTweet This I have it all, but I feel a void… The Ready Application of Neural Networks Neural networks (in theory) existed since the 1950's, but it wasn't until the mid-1980's thatalgorithms became sophisticated enough for real neural network applications. McCulloch and Pitts groundbreaking work, “ A Logical Calculus of the Ideas Immanent inNervous Activity ” lay the theoretical groundwork for neural network processing.•

The Second Story Of Echo And Narcissus Are you listening closely? This is the story you know: "Narcissus was a man who was so in love with himself that he fell in love with his own reflection. No one else was good enough for him. He stared into the pool, and eventually wasted away." Google and Neural Networks: Now Things Are Getting REALLY Interesting,… Back in October 2002, I appeared as a guest speaker for the Chicago (Illinois) URISA conference. The topic that I spoke about at that time was on the commercial and governmental applicability of neural networks. Although well-received (the audience actually clapped, some asked to have pictures taken with me, and nobody fell asleep) at the time it was regarded as, well, out there. After all, who the hell was talking about – much less knew anything about – neural networks. Fast forward to 2014 and here we are: Google recently (and quietly) acquired a start-up - DNNResearch – whose primary purpose is the commercial application and development of practical neural networks. Before you get all strange and creeped out, neural networks are not brains floating in vials, locked away in some weird, hidden laboratory - ala The X Files - cloaked in poor lighting (cue the evil laughter BWAHAHAHA!)

Stars in My Pocket Like Bits of Data by Paul Stephens The poetics of information overload. Eric Hu, Drone. © Eric Hu. Everybody gets so much information all day long that they lose their common sense. —Gertrude Stein Collective Intelligence in Neural Networks and Social Networks « 100 Trillion Connections Context for this post: I’m currently working on a social network application that demonstrates the value of connection strength and context for making networks more useful and intelligent. Connection strength and context are currently only rudimentarily and mushily implemented in social network apps. This post describes some of the underlying theory for why connection strength and context are key to next generation social network applications. A recent study of how behavioral decisions are made in the brain makes it clear how important strengths of connections are to the intelligence of networks.

"On Truth and Lies in a Non-moral Sense" / F. Nietzsche Friedrich Nietzsche On Truth and Lies in a Nonmoral Sense Once upon a time, in some out of the way corner of that universe which is dispersed into numberless twinkling solar systems, there was a star upon which clever beasts invented knowing. That was the most arrogant and mendacious minute of "world history," but nevertheless, it was only a minute. After nature had drawn a few breaths, the star cooled and congealed, and the clever beasts had to die. _One might invent such a fable, and yet he still would not have adequately illustrated how miserable, how shadowy and transient, how aimless and arbitrary the human intellect looks within nature.

From the page : "This emerging Synaptic Web is the beginning of a planetary intelligence. The Synaptic Web is our collective stream of consciousness, although the global brain itself is far from conscious yet. It cannot reason or think yet. The global brain is still dorment, like a baby in a womb, slowly developing its neocortex and silently observing us… Until it wakes up…" by noosquest Mar 9