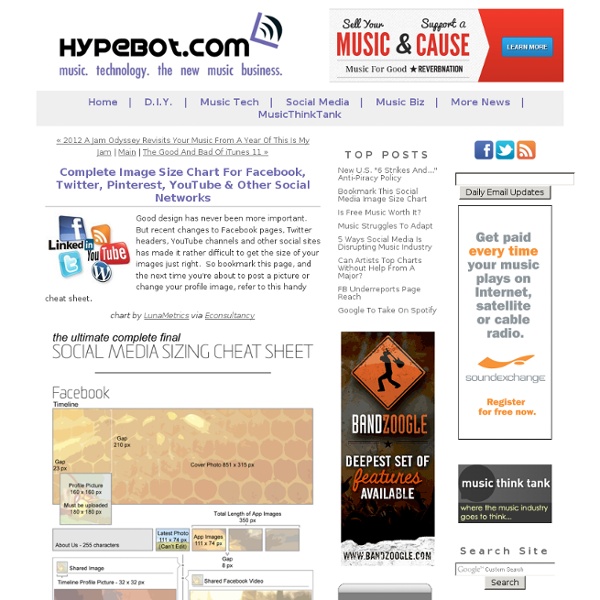 If your world is social media or music, subscribe to one of Hyebot's free feeds and get involved in our community. Good design has never been more important. But recent changes to Facebook pages, Twitter headers, YouTube channels and other social sites has made it rather difficult to get the size of your images just right. So bookmark this page, and the next time you're about to post a picture or change your profile image, refer to this handy cheat sheet. chart by LunaMetrics via Econsultancy

Preview: Baltimore: The Infernal Train #1 A preview of the upcoming Baltimore: The Infernal Train #1 by Mike Mignola, Christopher Golden, Ben Stenbeck and Dave Stewart… Head References for Artist – Lighting Do you need lighting references for a human head? In my reference library I have various lighting references on faces, but it’s never complete as they come from difference sources and of different people. So here I have taken the 3D head model from my Lady Dragon statue and created an animation with various lighting angles, creating a complete head reference for lighting. I’ve always wanted to create this kinds of references for myself.

Stroke Economy Two weeks ago talked about pushing further, and adding extra polish to your paintings. In that case, more was better. More brush strokes, more details, more polish. Pinup Research & Development: Action / Repose Think of someone driving a car with automatic transmission : One foot works the gas/break pedal while the other stays idle. One hand grips the steering wheel while the other rests on their leg or by the window. Many activities are like this -- with some parts of the body in action and some in repose.

Dynamic Brushwork There's a challenging threshold for beginners to cross as they learn to digital paint: dynamic brush strokes. It's a pretty linear process as you learn to make smooth, crisp, rendering with the basic three brushes. Taking the leap to active, dynamic, strokes can seem daunting. That's where the newest edition to the Ctrl+Paint store comes in: Dynamic Brushwork. View topic - Crits on mixed color styles I can think of some resources that may prove useful, MarissaLouise. I like to be clear and communicate my thought process about why I think they're good, so maybe get a snack. I consider all of these investments, like a decent computer. Except cheaper than a computer and unlikely to go obsolete!

Samsung Ativ Q - Tablets June 20, 2013 12:00 PM PDT / Updated: June 21, 2013 9:44 AM PDT LONDON -- It's a hybrid device, transforming from a Windows 8 slate into a full-fledged laptop in one quick motion. That's not all, though -- at the tap of an icon it'll boot into Android Jelly Bean, letting you swipe around all of your favorite apps from the Google Play store. It's packing the latest Intel Haswell Core i5 processor, with a 13-inch display boasting a whopping 3,200x1,800-pixel resolution. A Roundup of the Best Wordpress Plugins I’ve been going through WordPress Plugins left and right lately so I thought I’d do a quick post to let you know what I’m finding useful. (Quick? Ha, this one turned into a monster!) If you do a quick search on Google for the “best of’s” you’ll come up with plenty of choices. Don’t even get me started on the Social Plugins though. I’ve tried so many now.