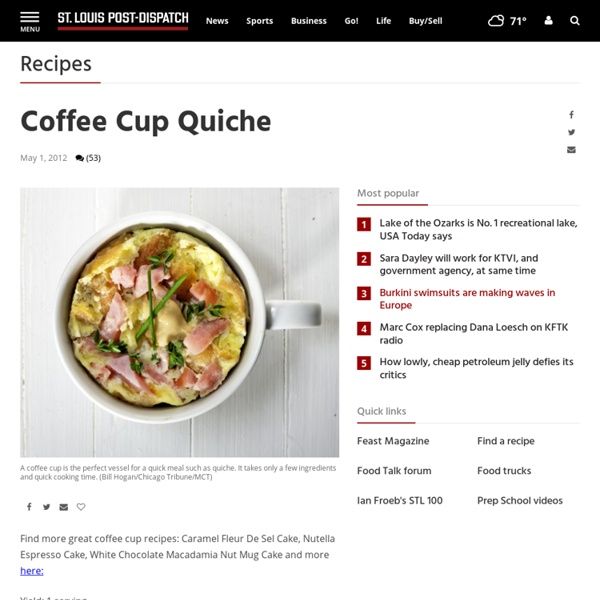 Egg and Cheese Breakfast Sandwiches Admin Note: Since this post, I’ve remade these using a better technique. Be sure to check out my Breakfast Sandwiches Revisited. After I made baked chicken nuggets a few weeks ago and explained my deal with Betsy (if she wants something from McD’s, I try to make it for her), I got a few emails saying that the only meal some people will eat at McDonald’s is breakfast. This struck me as kind of odd because most of the stuff on their breakfast menu is even easier to reproduce at home than the stuff on their other menus. Take their classic Egg McMuffin for example.

The Web's Best Recipes With Bacon Seeing as how just about every recipe you come across these days includes bacon in one way or another, composing this list was a bit of a challenge. An awesomely delicious challenge, but still a challenge. After lots of searching, cooking and sampling, we can proudly say that these are The Web’s Best Recipes With Bacon: The Manwich First off, make sure you buy some solid bread when you’re making The Manwich. Buffet Pancake Dippers How fun are these Buffet Pancake Dippers! With a hidden surprise. BACON!!! Who can resist Bacon Pancakes! When pouring syrup over my pancakes I always include the bacon. Come on admit it you do to. Restaurant Style Orange Chicken Alright you guys, seriously, this orange chicken tastes exactly like the best orange chicken you’ve ever had at any restaurant. I was very, very, very skeptical at first because I’ve never fried meat before and I was afraid it would turn out terribly. Kramer was adamant about having me make orange chicken that would remind me him Chinese take-out, though, and I couldn’t let him down! It was perfectly crispy and crunchy and the sauce was right on point; sweet and tangy and with a little bit of heat. I honestly can’t emphasize how good this orange chicken is. You won’t be able to stop eating it, and it heats up great in the microwave as leftovers the next day.

Huevos Rancheros - Food & Drink - msn Maybe I just have Mexican food on the brain after my trip earlier this month? Or maybe I am just obsessed with it all the time anyways, but I am on a pretty major spree. And yesterday when I posted all about how to make Restaurant Style Mexican Black Beans, it was only expected that I come up with some way for you to use those black beans today. - StumbleUpon From the molten yolk and bacon crunch of a hand-held breakfast, to the gooey charm of grilled cheese for lunch, nothing matches the simple pleasures of well-made sandwiches. They're quick to assemble, infinitely adaptable, easy to eat, and immediately satisfying—the very definition of good food. The 25 sandwiches you're about to meet can be thrown together during the average basketball halftime or, with practice, during the seventh-inning stretch. (Who needs hot dogs, anyway?)

Buttermilk Pancake Recipe While many resort to pancake mix when making a special weekend breakfast, homemade pancakes are a must. Here's the little-known secret: the batter takes just as long to make as a boxed mix, and the result is infinitely better. If the attractive appearance of these golden, crisp cakes isn't enough to push you toward the skillet for a sneak taste, surely the buttery scent and familiar buttermilk tang will send you over the edge. As long as you follow the recipe and keep an eye on the heat, you'll produce something that looks like pancakes. If your flipping skills are a bit messy, don't worry! You'll get better with practice.

These Exist!? Zipzicles Are Ziploc Bags Designed For Popsicles We’re getting a bit nostalgic here today. What did you call the ice pops that came in a sealed plastic tube and that you generally bought in a box of at least 50? At Brit HQ some of us knew them as Otter Pops, others as Flav-or-Ice, and still others as freeze pops. Chocolate Stout Cake « Cooking Blog - Find the best recipes, cooking and food tips at Our Kitchen. 10th September 2012By KatePhotography by Adam There has been quite a buzz around beer in the office lately, but being seven months pregnant, I decided that it was only fair that I should be allowed to get in on the action even if it meant putting the beer in a cake! As it turns out, the beer in the cake trick resulted in a deliciously rich, bittersweet treat, of which I must confess I had a second slice. Kurt was kind enough to give me a bottle of his best and blackest brew for the job. This little beauty combined with the robust richness of the molasses sugar gave the cake an earthiness that would really make it stand out in a line up of chocolate cakes.

50 Things to Grill in Foil How to make a foil packet: 1. Lay a large sheet of heavy-duty foil or a double layer of regular foil on a flat surface. (Use nonstick foil where noted.) 2. Put the ingredients in the center of the foil. Bring the short ends of the foil together and fold twice to seal; fold in the sides to seal, leaving room for steam.

Orange rolls cooked in oranges over a fire First, a big giant welcome to all the new users from Pinterest and Pillsbury. I hope you enjoy TrulySimple and let me know what you think. We Went camping with our friends to Pismo Beach state park over the weekend and had a great time. We love Pismo Beach and especially love eating at Splash’s Cafe. They have the best clam chowder in the world. I love camping and I love eating while camping. Web's Tastiest: Pancakes Recipes Everyone knows that breakfast is the most important meal of the day. So of course you want to get off to a good, healthy start. However, anyone with kids knows that some mornings are just too special to worry about a properly balanced meal.

Apple Rose Tarts October 2, 2012 Say that you are having a party. Say, a large party, one with lots of guests. The kinds of guests you want to impress, but are svelte health-conscious types, so you don’t want to go overboard with dessert and serve a seven-layer chocolate cake or something.