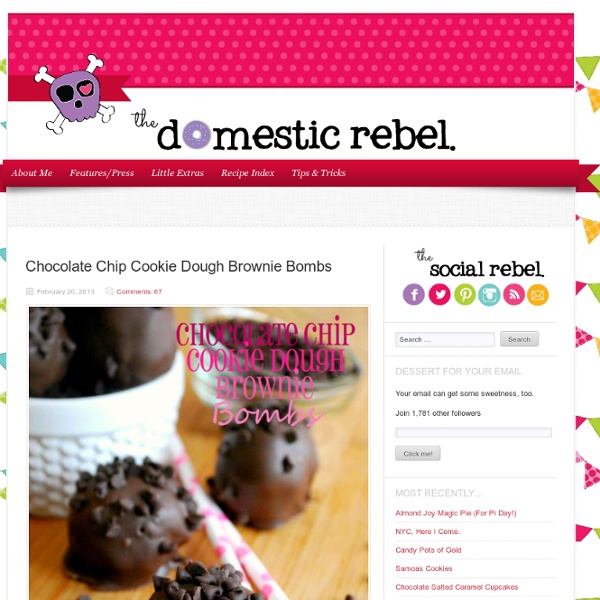 Oh mylanta. What have I done? If I’m not mistaken, that’s a ball of cookie dough surrounded by a fudgy brownie and then coated in chocolate and sprinkled with mini chips. Whoooa. Sometimes, I don’t even know WHERE half my ideas come from. Most days, you can find me scatterbrained and roaming the grocery store like a complete looney tune. Lucky for me, I usually shop at a store that may or may not rhyme with Schmalmart, and the fact that I’m aimlessly walking back and forth while talking to myself isn’t really that out of the ordinary. Anywhooooo, the idea for these truffles came from left field. And this zeppelin dropped a gigantic bomb of brilliance on me: wrap a brownie around a ball of cookie dough. Now pardon me, but I have some reading/judging to do and it’s VERY important. Chocolate Chip Cookie Dough Brownie Bombs Author: Hayley Parker, The Domestic Rebel Recipe type: Bombs Prep time: Cook time: Total time: Serves: 15-18 My SIGNATURE recipe. Ingredients Instructions Let’s make some dough!

System76 Gazelle Pro: An Intel Haswell Laptop With Ubuntu Linux Review Published benchmarks on Phoronix already of the Gazelle Professional include: - Ubuntu 13.04 vs. 13.10 benchmarks to show off the performance difference for the Intel Haswell laptop with the latest Linux code. - Early LLVM/Clang 3.4 benchmarks. - XMir performance benchmarks compared to a pure X.Org Server with the current Ubuntu 13.10 development packages. In this article for getting a better idea of the Intel Haswell Linux laptop performance, the System76 Gazelle Professional was compared to: ASUS K56CA Ultrabook - An Intel "Ivy Bridge" laptop/ultrabook with an Intel Core i3 3217U CPU, 4GB of RAM, 500GB Hitachi SATA HDD and 24GB SanDisk SSD, Intel HD 4000 graphics, and 1366 x 768 display. HP EliteBook 1611C - An Intel "Sandy Bridge" laptop which model served as Intel's Software Development Vehicle for Sandy Bridge. All three laptops were loaded with an updated Ubuntu 13.04 stack boasting the Linux 3.8 kernel, Unity 7.0, Mesa 9.1.3, and the GCC 4.7 compiler.

Toshiba Launches Hero Animation "Double Circle" Describes the Smart Community｜株式会社東芝のニュースリリース TOKYO — Toshiba Corporation (Tokyo: 6502) today announced the launch of "Double Circle," a series of on-line animated short movies set in Kawasaki, Japan, that will entertain and delight anime fans while introducing the smart community that Toshiba pictures for downtown Kawasaki. A dedicated website and the official social media accounts open today, and animation streaming will start at the end of November. Double Circle encompasses two concepts: infinitely-evolving energy; and a comfortable city realized with the information and communication technology (ICT) of the smart community business. Each film in the series will see citizens of Kawasaki transformed into heroes who battle and overcome the enemy; the evolving smart community and renewable energy versus a world where time stand still / a world where is without color. Toshiba will open its new Smart Community Center on the west side of Japan Railway's Kawasaki Station on October 31. Facebook

vegan pasta salad recipe | Live. Learn. Love. Eat. I am not a huge fan of raw vegetables. You could probably tell that by now from all the baking that I do. I love to eat fruit and I love vegetables in soup, casseroles, stir-fry’s or any other dish that I can load them into. Eating salads or sitting and munching on raw vegetables is not something that I would consider a favorite past time of mine. Luckily Kesa and Autumn love raw vegetables with Catalina dressing. For lunch today I was going to make a soup and bread, but I decided to make something different for a change. Rainbow Vegetable Pasta Salad A great way to get in a few servings of vegetables and eat all the colors of the rainbow! Ingredients 1 (300 g) box whole wheat bow tie pastaRED – 1 large tomato, choppedORANGE -1 small orange pepper, dicedYELLOW – 1 small yellow pepper, dicedGREEN – 1/2 long English cucumber, diced (1 cup)BLUE/GREEN – 1 head broccoli, chopped (1 1/2 cups)PURPLE – 1 small red onion, sliced (1/2 cup) Red Wine Vinaigrette - Directions

Cable Car Remnants | Forgotten Chicago | History, Architecture, and Infrastructure In 1882, Chicago took a daring step in transit, as it had done previously in countless other fields including public works, meat processing, interstate transportation, futures trading, water management and building construction. At a time when myriad transit schemes and dreams were being tested around the country, especially locally, Chicago became the first city to try San Francisco’s style of cable cars. The City by the Bay had started experimenting with cable cars in 1873 and found them an effective albeit expensive solution to carrying modest numbers of passengers up steep hills in a moderate climate. Inaugurated on a cold, blustery day in January 1882, Chicago City Railway (CCR)’s first cable car line ran on State Street from Madison Street to 21st Street. Nevertheless, the inaugural run went well and the technology appeared to be well suited to Chicago—crowds, cold weather and all. Extant Remnants of Chicago’s Cable Car System Jonathan Michael Johnson Chicago Transit Authority

Strawberry Heart Pie » It was Father’s Day this past Sunday and it’s my dad’s birthday today so I wanted to make something special for him. I had this pear-raspberry heart pie bookmarked for a while and I thought it was the perfect occasion to finally make it. I used the same heart design but I made it into a strawberry pie and I used ready made pie crusts to save time. I know you’re not going to believe me but it was really easy to make. It just looks fancy but that’s the point! It was so delicious. Ingredients 3 – 4 cups of strawberries (cut into chunks)Frozen pie crustPillsbury pie crusts1/2 cup granulated sugar1/2 cup water3 tablespoon cornstarch1 egg yolkSanding sugar In a bowl, coat the cut strawberries with sugar. I used both pie crusts just in case. Let the strawberry filling cool and then pour into the pie shell. Brush one side of the hearts with the egg wash and firmly place them on the crust. This is the first row. Brush the entire pie with egg wash and dust with sanding sugar. The perfect sweet treat!

Hawthorne Threads - Amy Butler, Joel Dewberry, Michael Miller & More Kit Kat Cake Kit Kat Birthday Cake & a RecipeGirl Cookbook Deal! I have some fun news today! It’s my birthday! Yay! And I’m super happy to be able to share with you that I’ve signed a deal with Wiley to write The Recipe Girl Cookbook! Let’s celebrate with cake! I saw this idea on the internet somewhere… surrounding a cake with Kit Kats, presenting it with a bow and topping it with M&M’s. It’s really very simple to make. I think you’ll be surprised just how incredibly easy it is to pull this off. I love how the “sea” of M&M’s makes this cake look so pretty. Wrap your brightest, cutest bow around the Kit Kat’s. It makes a fun birthday cake. And it’s delicious too! When I quit teaching and debuted my recipe website back in 2006 and then added the blog in 2008, I never imagined that my life would take such a positive turn… that I would end up with a career that I love so much!

Custom SOL REPUBLIC Tracks HD Audiophiles, look no further. SOL REPUBLIC HD Wired headphones have changed what you can expect with sound, style and durability. And now they have teamed up with ColorWare in a Premier Partnership to create the ultimate customization experience. The simple and sleek design of the SOL REPUBLIC Sound Track™ headband coupled with the lightweight ear cushions make them extremely portable and very comfortable. The Sound Track™ headband is made with an exclusive polymer compound that is flexible, yet extremely durable. The ear cups deliver crisp, clean sound to enhance your listening experience. SOL REPUBLIC HD headphones are not only stylish and comfortable, but they are compatible with most audio players.

How to Become a Garbage Collector: 7 Steps Edit Article Edited by Jim Kelly, Andy Zhang, Flickety, Ben Rubenstein and 22 others Having the garbage collected and taken away is one of society's most needed activities. Ad Steps 1Decide if you have the temperament for collecting garbage. 7Ask your employer what equipment you have to fund yourself, if any. Tips Keep your work clothes separate from your home clothes. Warnings Don't even consider this employment if you have back, arm or leg problems or you lack strength.

Russian black metal bands list Disclaimer: the list placed below features only those bands who perform black metal as well as related stuff, such as unholy death metal, dark ambient, and so on and so forth. Besides that, as you most probably will notice, I didn't indicate all the recordings these acts might have behind 'em; and the reason is quite simple - I don't have complete info, consequently your help will be much appreciated (in order to enlarge this record). Lastly, please note that the list you’re now going to scroll through, also includes BM bands coming from Belarus and Ukraine. ABSURD (Swedish school death / black) (R.I.P.?)"âÅÓÓÍÙÓÌÅÎÎÏÓÔØ âÙÔÉÑ" demo (1997)"Frostland" demo (1998)Live cassette EP (1999)"Beyond The Dawn" promo (2000) AEON (dark ambient)"Nightside Tea" CD (1999, Coronach Records) ALKANOSTA PESN' PECHALI SMERTNOY (áìëáîïóôá ðåóîø ðåþáìé óíåòôîïê)(heathen metal)Digipack / MC (Undead Wood) BASTION (âáóôéïî) ("psychomental black")"ëÏÇÄÁ òÉÍÓËÏÇÏ ðÁÐÕ ôÒÁÈÎÅÔ ëÏÚ£Ì" demo (1999) DUNGORTHEB (black)

The Crumbling Chaos of Abandoned Amusement Parks Well, unless it's a giant toxic waste dump most of these companies have gone belly up uso there isn't any money left to clean it all up. Have you BEEN HERE!! Huge corporations could have built a stage near Congress with 100, 000 people a day taking huge Taco Bell dumps off of it, and leave it all to rot. SExpand Someone, whether it is the amusement park company, or a bank that foreclosed, or whatever, still own the property. seems like youve unintentionally outlined why capitalism sucks