Peer-to-peer rental: The rise of the sharing economy 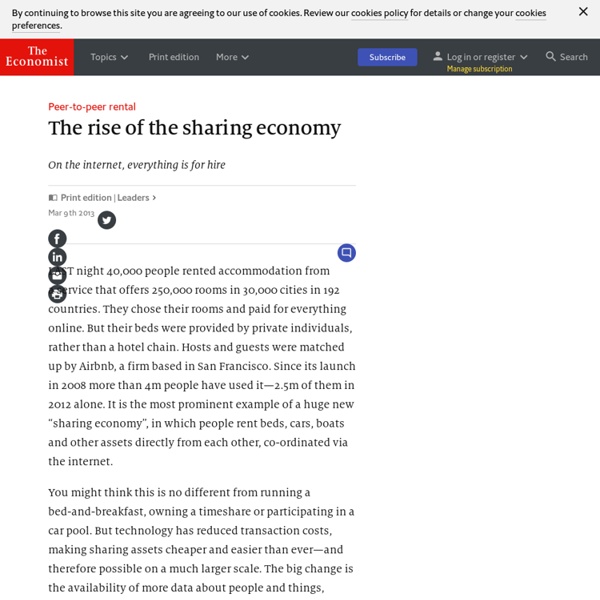 LAST night 40,000 people rented accommodation from a service that offers 250,000 rooms in 30,000 cities in 192 countries. They chose their rooms and paid for everything online. But their beds were provided by private individuals, rather than a hotel chain. Hosts and guests were matched up by Airbnb, a firm based in San Francisco. Since its launch in 2008 more than 4m people have used it—2.5m of them in 2012 alone. It is the most prominent example of a huge new “sharing economy”, in which people rent beds, cars, boats and other assets directly from each other, co-ordinated via the internet. You might think this is no different from running a bed-and-breakfast, owning a timeshare or participating in a car pool. What’s mine is yours, for a fee Just as peer-to-peer businesses like eBay allow anyone to become a retailer, sharing sites let individuals act as an ad hoc taxi service, car-hire firm or boutique hotel as and when it suits them. Peering into the future

Nothing to wear? Peer-to-peer fashion rental start-up could help You know how it is – a wardrobe full of clothes but nothing to wear? Or indeed a city full of people but no-one to meet up with? Young, French entrepreneur Fiona Disegni has come up with a solution to both. How Freelancers Are Redefining Success To Be About Value, Not Wealth In an iconic scene in The Wolf of Wall Street, Jordan Belfort--the “wolf” played by Leonardo DiCaprio--launches his $40,000 Rolex into a sea of outstretched hands, as eager young stockbrokers lunge for it, nearly clobbering one another in the process. The scene perfectly captures the infamous excesses of Wall Street in the ‘80s. But I couldn’t stop thinking about how it contrasts with the dramatic shift underway in the American economy. The nation’s 42 million freelancers are rewriting the definition of success--and it has nothing to do with gold watches, but everything to do with time. Independent workers are establishing a new way to work--and in the process, they’re cultivating a new way of life.

The Top 8 Collaborative Consumption Stories Of 2012 Collaborative consumption, the peer-to-peer economy, the micro-entrepreneurship economy, the sharing economy: whatever you want to call it, this was the breakout year for digital platforms that let people share their personal assets, and in many cases carve out a decent side business from them. Home-sharing service Airbnb is perhaps the best-known platform, but it’s hardly the only one that has found success. Peer to peer carsharing marketplaces like Relayrides and Getaround also grew in popularity over the past year; Relayrides is now available nationwide; Getaround is only available in select cities, but it recently launched a service that lets people rent their idle vehicles for months at a time.

Craft as a creative industry: what doesn't get counted, doesn't count The Department for Culture, Media and Sport (DCMS) issued its paper for consultation on classifying and measuring the creative industries in April. This new paper proposes the removal of 'crafts' as a recognised category within the creative industries. This is of great concern to us and the thousands of makers and organisations across the UK who contribute to one of the most vibrant craft sectors in the world. DCMS states that the removal of crafts as a recognised category would not have any impact on funding and they have reassured us that it believes craft is still a very important sector. However to omit this as a category denies makers, craft agencies and organisations and the government itself robust and commonly agreed data that evidences craft's importance.

Why every leader should care about digitization and disruptive innovation The disruptive impact of technology is the topic of a McKinsey-hosted discussion among business leaders, policy makers, and researchers at this year’s meeting of the World Economic Forum, in Davos, Switzerland. In this video, two session participants preview the critical issues that will be discussed, including the impact of digitization and automation on labor markets and how companies can adapt in a world of rapid technological change. What follows is an edited transcript of their remarks.

Beyond Zipcar: Collaborative Consumption It’s been more than a decade since the founding of Netflix and Zipcar, and by now both are well-established businesses. They’re leading examples of an economy and culture model we call collaborative consumption—systems of organized sharing, bartering, lending, trading, renting, gifting, and swapping. Collaborative consumption gives people the benefits of ownership with reduced personal burden and cost and also lower environmental impact—and it’s proving to be a compelling alternative to traditional forms of buying and ownership. Design and craft subjects fall out of favour in schools Oskar Paulinski is talking Education Guardian through his design for a birdhouse, conceived in the style of a chocolate box-perfect country cottage. Holes in the roof, fashioned to look like skylights, will allow the birds to fly in and out, and doors at ground level allow access to the box's owner. The pencilled plan shows pretty paned windows. "I'm still figuring out whether to paint them on or leave it as glass," says the 16-year-old. We discuss whether nesting birds might prefer the darker interiors afforded by the painted option. "I like practical stuff and designing stuff," says Oskar, who is studying for a GCSE in resistant materials at Strood academy, in Medway.

The sharing economy grows up The sharing economy continues to attract attention as it grows into an ever more significant economic force. Estimates of its scale vary and are, because of the very nature of the sector, difficult to achieve. One estimate put the value of the sector at $110 billion; another puts peer to peer rental at $26 billion. Airbnb, the room share service, is valued at $2.5 billion and has estimated revenues of $623 million in New York alone. Big numbers in anyone’s book. Several things are driving the growth.

Collaborative Consumption for the Enterprise: What CIOs Should Know Collaborative consumption has taken the consumer space by storm. Now enterprises are trying to determine how they can capitalize on the collaborative consumption trend. CIOs who are looking for ways to have a direct, revenue-generating or cost-savings impact on their businesses may be interested in exploring collaborative consumption, a trend that is modernizing the way consumers purchase products and services. Collaborative consumption is essentially a social and economic system that allows individuals to swap, share, rent out, or otherwise exchange their possessions or skills. Alternative business models for sustainable fashion – live chat roundup Programmes where you can lease clothing or co-buy with friends are helping to steer us in a direction away from conventional consumption. Photograph: Dominic Lipinski/PA Why should the fast fashion industry change?

How Big Retail Could Mainstream Collaborative Consumption Overnight In a world where everyone shares, traditional retailers will wither and die, right? That’s a common assumption of people new to collaborative consumption. Everybody gets that sharing reduces demand. Adidas by Stella McCartney launches waterless "DryDye" T-shirt As part of Adidas's latest venture to show greater environmental awareness in the making of its garments, Adidas by Stella McCartney just launched a T-shirt that uses a technology the brand says uses no water during the dye process. Dubbed DryDye, the technology relies on pressurized CO2 in place of water to dye the shirts, all in an effort to reduce the vast quantities of water used to dye clothing. "To dye the world's clothing, the equivalent amount of water from the Mediterranean Sea is used every two years, not only depleting important water resources but also affecting the healthy future of our planet," according to a September 24 Adidas press release. The adidas by Stella McCartney DryDye T-shirt is part of the FW12 collection and priced at 45 euros. You can purchase it now at the Adidas by Stella McCartney stand-alone store in London, as well as selected stores in Korea, China, and Germany and online at www.adidas.com/stella. Watch a video on DryDye: www.youtube.com/watch?

Uniiverse Balance Minds and Bodies On a neurochemical level, the hormone oxytocin plays a central role in the stress-protective effects of social interaction. Meta-analyses of the effects of this golden chemical have demonstrated that it immediately and drastically quenches stress and alleviates mood in response to psychosocial stressors (Heinrichs 2003). Not yet convinced? Oxytocin has been shown to exert as far-reaching effects as lowering blood pressure and increasing the rate of wound healing (Uvnas-Moberg 1998). 3D-printed fashion: off the printer, rather than off the peg The most eye-catching prints in fashion aren't florals or leopardskin but printouts. Fantastical 3D-printed designs created by a pulsed laser that layers powdered rubbers or metals into a shape calculated by computers. These creations, by Dutch designer Iris van Herpen, are the first created with 3D printing to grace the catwalk. They're loved by the likes of Lady Gaga and Bjork, but have implications for your wardrobe too. While this manufacturing technique – originally developed for engineers – has history in jewellery and shoe design, the possibilities for the clothing industry are tantalising. It could revolutionise garment sizing and product development in mass production.