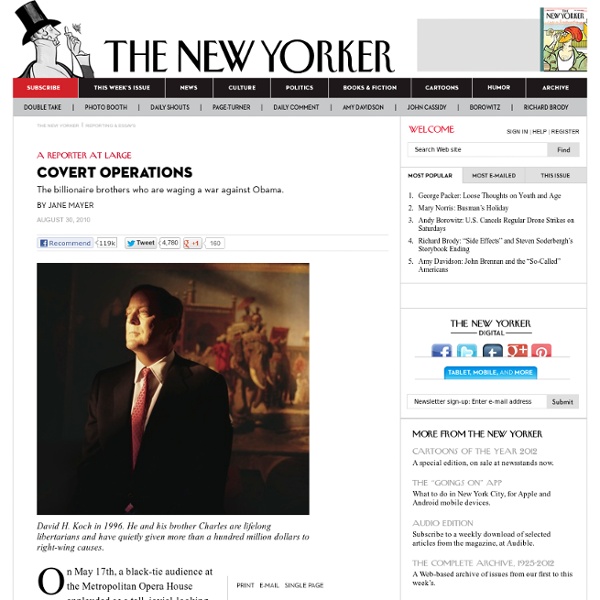 On May 17th, a black-tie audience at the Metropolitan Opera House applauded as a tall, jovial-looking billionaire took the stage. It was the seventieth annual spring gala of American Ballet Theatre, and David H. Koch was being celebrated for his generosity as a member of the board of trustees; he had recently donated $2.5 million toward the company’s upcoming season, and had given many millions before that. Koch received an award while flanked by two of the gala’s co-chairs, Blaine Trump, in a peach-colored gown, and Caroline Kennedy Schlossberg, in emerald green. Kennedy’s mother, Jacqueline Kennedy Onassis, had been a patron of the ballet and, coincidentally, the previous owner of a Fifth Avenue apartment that Koch had bought, in 1995, and then sold, eleven years later, for thirty-two million dollars, having found it too small. The gala marked the social ascent of Koch, who, at the age of seventy, has become one of the city’s most prominent philanthropists.

US thinktanks give lessons in foreign policy A little-known fact about Richard Perle, the leading advocate of hardline policies at the Pentagon, is that he once wrote a political thriller. The book, appropriately called Hard Line, is set in the days of the cold war with the Soviet Union. Its hero is a male senior official at the Pentagon, working late into the night and battling almost single-handedly to rescue the US from liberal wimps at the state department who want to sign away America's nuclear deterrent in a disarmament deal with the Russians. Stephen Colbert Ridicules The Dismantling Of Wake County's Successful Schools Last night, Stephen Colbert deployed "The Word" to bring his show's unique and wonderful brand of language-brutality upon the recent decision of the Wake County, N.C. school board to dismantle a successful school system that had achieved schools of high economic diversity and astounding rates of parent satisfaction. The baseline reason given for taking apart a success story was austerity. But Colbert highlighted a lot of the pure disingenuous nonsense involved -- in the mind of Tea Party acolyte and school board member John Tedesco, for instance, the successful program was nothing more than government sponsored "social engineering," and the poor were much better off in a situation that magnified their hopelessness.

China Stands Firm on Unconditional Climate Funding ahead of Cancun Talks Discuss this articleShare your views with other visitors, and read what they have to say With Cancun climate talks only a week away, the world’s largest carbon emitter says it will not accept a deal on climate financing if it hampers their ability to prioritise domestic policy. Huang Huikang, the Chinese Foreign Ministry’s special representative for climate change talk, said Friday that so-called emissions transparency conditions would not be acceptable in any green fund. Ministers will be meeting in Cancun, Mexico next week to try to advance talks toward a global climate deal that will chart the course for the post-2012 period, when the first phase of the Kyoto Protocol expires. Rich countries generally favour the creation of a new climate pact to succeed Kyoto – one that places more responsibility on key developing country emitters like China and India. Financing should be “unconditional”

Think Tanks in the Economics Profession Indicators via representation at the Allied Social Sciences Association meetings. In the past few years, I have read more policy analyses from Washington DC based think tanks than usual. I’ve assessed some of these reports on Econbrowser over the past year, including some by the Heritage Foundation [H1] [H2] [H3], American Enterprise Institute [A1], Peterson Institute for International Economics [P1], [P2], Phoenix Center for Advanced Legal and Economic Public Policy Studies [Ph1] [Ph2]. I thought it would be interesting to see how many economists from these think tanks attended the Allied Social Sciences Association meetings in Chicago, as an indicator of the level of rigor and location near the mainstream of these research groups.

The GOP Only Cares About Their Corporate Paymasters and Wealthy Elites Like the Kochs January 19, 2011 | Like this article? Join our email list: Stay up to date with the latest headlines via email. Early this month, when John Boehner was sworn in as the new speaker of the House of Representatives, he tipped his hat to the teabag activists across the country who had fueled the Republican takeover of the chamber last fall. He almost choked up as he promised to "give the government back to the American people." Rich more willing to set up family foundations By He Dan and Yu Ran (China Daily) Updated: 2011-05-16 07:57 Entrepreneurs to use bonuses, stocks for charitable giving BEIJING - Mainland billionaires are showing an ever greater eagerness to establish family foundations for charitable purposes and to fall in line with what experts think is the most decent way for the rich to spend their money. Earlier this month, Cao Dewang, chairman of the glass giant Fuyao Group in Fuzhou, Fujian province, used stocks with a market value of 3.55 billion yuan ($546 million) to establish a family foundation.

The Alarming Corruption of the Think Tanks Item: U.S. Senator Jim DeMint (R-SC) resigns from Congress to become president of the Heritage Foundation Item: Former House Majority Leader Dick Armey resigns as chairman of FreedomWorks over $12 million in secret cash payments to the organization, leaves with $8 million payout. These two items illustrate an important phenomenon now taking place in Washington: the end of the think tank as we know it. Rather than being institutions for scholarship and research, often employing people with advanced degrees in specialized fields, think tanks are becoming more like lobbying and public relations companies. Increasingly, their output involves advertising and grassroots political operations rather than books and studies. They are also becoming more closely allied with political parties and members of Congress, to whom they have become virtual adjuncts.

Health-care law: Arizona tries new approach to get by federal Medicaid rules Republican efforts to repeal or limit the reach of the new health-care law took a new direction last week when Arizona lawmakers approved a novel and controversial attempt to cut Medicaid for 280,000 of the state's poor. The bill, requested and signed by Gov. Jan Brewer (R), empowers her to make a formal request, most likely this week, for a federal waiver to avoid complying with provisions of the law that prohibit states from tightening their eligibility requirements for Medicaid. Twenty-nine Republican governors, including Brewer, have signed a letter calling on President Obama and congressional leaders to remove the provision from the law.