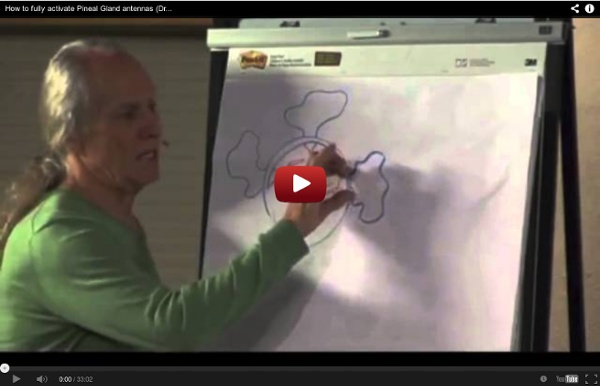 Pineal gland calcification and defective sense of direction. C R Bayliss, N L Bishop, R C Fowler Calcification of the pineal gland is shown to be closely related to defective sense of direction. In a tricentre prospective study of 750 patients lateral skull radiographs showed that 394 had calcified pineal glands. You need headphones... Chakras Chakras Chakra means Wheel in Sanskrit. Consciousness and energy move from one frequency to another in spiraling fashion. The body has energy centers that look like spinning wheels and are called Chakras. They allow energy to flow from one part of the body to another. As with all things in our reality, they are linked to sound, light and color. To heal, is to bring the chakras into alignment and balance then understand the nature of creation and your purpose in it. It's all in motion in the alchemy of time. Kundalini The Flow of Energy The Chakra Wheels Crown Chakra Brow Chakra Throat Chakra Heart Chakra Solar Plexus Spleen Chakra Root Chakra Chakras above the head bring one into higher frequency. They range from 4 fingers to one foot above the crown chakra. Chakras as Spiral Cones Third Eye Pineal Gland 12 Around 1 Spiraling Cones of Creation Chakra and Color Frequencies RED 1st Chakra: Base or Root Chakra: Kundalini: Root Chakra: Located at the base of the spine. Crystals are used with chakras 12 Around 1

The Pineal Gland (The Third Eye), Chakras and Solfeggio Frequencies | Riding effortlessly on a large green turtle Please watch on full screen with a peaceful, open mind. Whether we are aware of it or not, we are all telepathic and are constantly emitting subtle vibrations. If we are sensitive, we can become more aware of the vibrations given off by people, nature and the universe in general. Sensitivity stems from stillness; a peaceful state of being, where understanding energy and its effect on ourselves and our environment; both locally and universally, is more apparent, even tangible. The pineal gland is responsible for the excretion of many beneficial chemicals that, if uninhibited, would lead to a better state of being and a greater understanding and connection with universal truths. The pineal gland is a small endocrine gland, the size of a grain of rice, in the vertebrate brain, its main function is to produce melatonin, a hormone that affects the modulation of wake/ sleep patterns (circadian rhythms or body your clock) and seasonal functions. This gland resembles a pine cone in shape.

Articles - Fluoride & the Pineal Gland: Study Published in Caries Research Fluoride & the Pineal Gland: Study Published in Caries Research International Fluoride Information Network March 27, 2001 IFIN Bulletin #269: Fluoride and the pineal gland. Luke published. Dear All, The wheels of science grind very slowly. In my view this work is of enormous importance and could be (or should be) the scientific straw that breaks the camel's back of fluoridation. When Luke found out that the pineal gland - a little gland in the center of the brain, responsible for a very large range of regulating activities (it produces serotonin and melatonin) - was also a calcifying tissue, like the teeth and the bones, she hypothesized it would concentrate fluoride to very high levels. The one activity that Luke is particularly interested in is the onset of puberty. When one considers the seriousness of a possible interference by fluoride on a growing child's pineal gland (and for that matter, elderly pineal glands) it underlines the recklessness of fluoridation.

The Pineal Gland is a Gateway How to Decalcify and Detoxify the Pineal Gland Anna Hunt, Staff WriterWaking Times The pineal gland, an endocrine gland located in the brain, is said to be the seat of the soul. Also referred to as the Third Eye, this small gland is believed to be involved in reaching higher levels of consciousness, acting as a gateway to dimensions beyond our brain-created reality. To learn more about the pineal gland, see: What is the Pineal Gland? For the people that seek to fully activate their spiritual potential and tap into the power of the pineal gland, one must begin by strengthening its function though detoxification and proper nutrition. Below is a list, in no particular order, of 8 supplements that will boost your pineal gland function, help in its decalcification, and support you on your journey of personal and spiritual cultivation. 1. The pineal gland already produces the hormone melatonin, which affects the body’s circadian rhythms of waking and sleeping. Recommended products: NOW Foods Melatonin 5mg Vcaps Natrol Liquid Melatonin 2. 3.

Fluoride-Free Pineal Gland is More Important than Ever There has been some controversy over the activity of adding synthetic fluoride to municipal water supplies and elsewhere, but not enough. The seriousness of this issue is more than what most realize. Fluoridation ranks with GMO’s and tainted, forced vaccinations among the great crimes against humanity. Understanding the Different Fluorides There are two types of fluoride. On the other hand, the type of fluorides added to water supplies and other beverages and foods are waste products of the nuclear, aluminum, and now mostly the phosphate (fertilizer) industries. For this article, the term Sodium Fluoride will include all three types. Health Hazards of Sodium Fluoride Generally, most fluoride entering the body is not easily eliminated. This consequence of dental fluorosis, which seriously harms teeth, from daily fluoridation has been documented. The flood of sodium fluoride in water and food also creates other more serious health problems that are not widely publicized, even suppressed.

Scientists Finally Explain How Acupuncture Works... And It's Related To Marijuana Electroacupuncture is a form of acupuncture where a small electric current is passed between pairs of acupuncture needles. It is particularly good for treating pain. TruthOnPot.com – Acupuncture has been around for thousands of years and so has medical marijuana. Their findings, published online by the National Institutes of Health, show how electroacupuncture – an electrified version of traditional acupuncture used to treat pain – works by increasing activity of natural painkillers in the body called cannabinoids. Explaining the thought process behind their study, the authors point to existing knowledge on cannabinoids – a group of molecules found in both cannabis and all vertebrate animals (including humans) – and their ability to fight pain by acting on specific receptors of the body: “Previous studies show that cannabinoid CB1 receptors are related to pain relief.” The acupuncture points used in the study correspond with human acupoints. They were, however, the first to explain why.

How to activate the Pineal Gland? - Decalcify Pineal Gland Ever asked the simple question of how to activate the Pineal Gland (Third Eye/Ajna Chakra)? Now here is the answer… Once you have started the journey of stopping further decalcification of your pineal gland and begin the process of detoxifying it, the next step is to start activating your pineal gland and thus developing your third eye. Activating your pineal gland and developing it further will allow you to exercise your 3rd eye and thus strengthen your psychic ability. Like any part of your body, once you understand how it works, you can help to maintain it so that it remains healthy. Just the same way our brains will develop if we use them more often, the same is true for our pineal glands. STEP 1 – Prepare your Environment for Pineal Gland (Third Eye/Ajna Chakra) Activation: The pineal gland needs pure darkness to emit melatonin, which produces serotonin. Purify the air in your home by purchasing an ozone machine or an air purifier. Recommended Product (UK & Europe): Chaga Powder 50g