21 Roads You Have to Drive in Your Lifetime 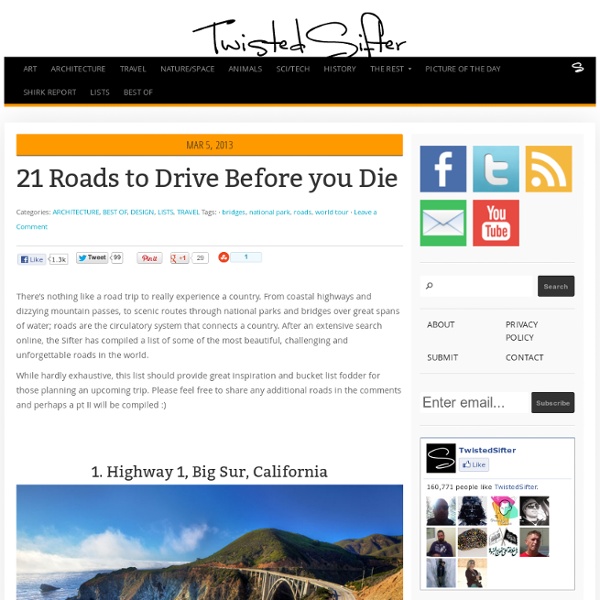 There’s nothing like a road trip to really experience a country. From coastal highways and dizzying mountain passes, to scenic routes through national parks and bridges over great spans of water; roads are the circulatory system that connects a country. After an extensive search online, the Sifter has compiled a list of some of the most beautiful, challenging and unforgettable roads in the world. While hardly exhaustive, this list should provide great inspiration and bucket list fodder for those planning an upcoming trip. Please feel free to share any additional roads in the comments and perhaps a pt II will be compiled :) 1. State Route 1 (SR 1) is a major north-south state highway that runs along most of the Pacific coastline of the U.S. state of California. 2. Furka Pass (el. 2429 m.) is a high mountain pass in the Swiss Alps connecting Gletsch, Valais with Realp, Uri. 3. 4. 5. 6. The Seven Mile Bridge is a famous bridge in the Florida Keys, in Monroe County, Florida, United States.

Top 10 Most Beautiful Cities in the World | ListFave.com Dreaming of traveling the world or visiting some of the most famous cities in the world? Then this list of the top ten most beautiful cities in the world can help you plan your dream vacation. It is little bit hard to come up with this list because beauty is very subjective. Nevertheless, this list was created based on surveys, number of tourists, and the overall aesthetic design of the cities. Budapest brings you back to the period of renaissance with its baroque and gothic monuments. Danube River runs through the city which makes the city more alluring. 10 Most Unbelievable Places in the World There are ten most unbelievable places in the world that you definitely must visit before you die. 1. Tunnel of Love, Ukraine Image credits: Oleg Gordienko This powerful train tunnel of trees called the Tunnel of Love is located in Kleven, Ukraine. 2. Image credits: Allard Schager The sensational landscape provokes a visual effect hard to repeat in a life time. 3. Image credits: dadi360 Salar de Uyuni (or Salar de Tunupa) is the world’s largest salt flat at 10,582 square kilometers (4,086 sq mi). 4. Image credits: nipomen2 | sename777 Hitachi Seaside Park, located in Hitachinaka, Ibaraki prefecture, Japan, next to the Ajigaura Beach, is a flower park and a popular tourist destination. 5. Image credits: Kent Mearig The Mendenhall Glacier is a tongue of ice stretching 12 miles from the Juneau Icefield to Mendenhall Lake. 6. Image credits: MJiA The Red Beach is located in the Liaohe River Delta, about 30 kilometer southwest of Panjin City in China. 7. Image credits: Yuya Horikawa | Tomoaki Kabe 8.

Amazing Collection of Beautiful Places and Spaces | Globe Traveling Our planet is far more impressive than we could imagine. It has the power to build landscapes that amaze us even after seeing them a few times. In this article I have gathered pictures of places and spaces in our beautiful world that are simply amazing and must be seen. 1. Located about 100 miles north of Reno, Nevada, is the tiny town of Gerlach. The most striking aspect of the Fly Geyser is its vibrant colors, which are caused by thermophilic algae. 2. The Ice Castles in Silverthorne are man-made ice formations created by Utah’s Brent Christensen. 3. This waterfall is very famous in Tuscany because is an open-air free hot spring. The waters of Saturnia Therme are sulphureous-carbonic-sulphate-bicarbonate-alkaline. 4. Neuschwanstein Castle is a 19th-century Romanesque Revival palace on a rugged hill above the village of Hohenschwangau near Füssen in southwest Bavaria, Germany. 5. The Sagano Bamboo Forest is one of Japan’s national treasures. 6. 7. 8. 9. 10.