Why The Human Body Will Be The Next Computer Interface 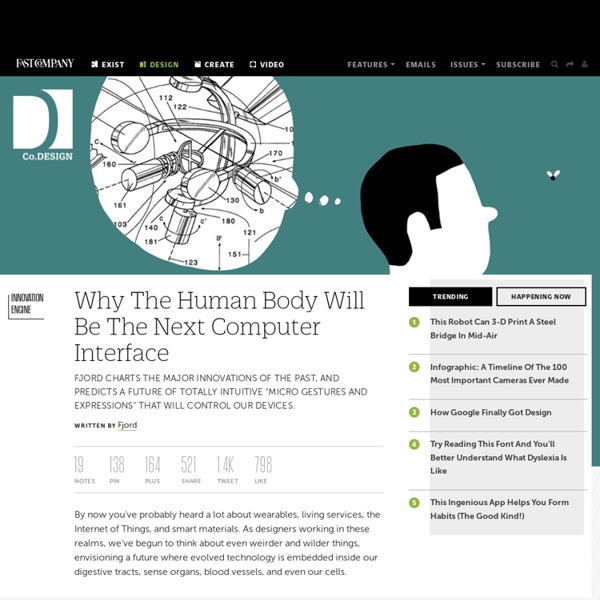 By now you’ve probably heard a lot about wearables, living services, the Internet of Things, and smart materials. As designers working in these realms, we’ve begun to think about even weirder and wilder things, envisioning a future where evolved technology is embedded inside our digestive tracts, sense organs, blood vessels, and even our cells. As a service design consultancy we focus on how the systems and services work, rather than on static products. We investigate hypothetical futures through scenarios that involve production/distribution chains and how people will use advanced technology. Although scientifically grounded, the scenarios proposed aren’t necessarily based on facts but on observations. To see the future, first we must understand the past. 1801: the first programmable machine Let’s skip the abacus and the Pascal adding machine and move straight to the 19th-century Jacquard loom. 1943: Colossus valve computer 1953: the FORTRAN punch card 1980: a regression occurs

How NASA might build its very first warp drive I want to see this work as much as anyone else on io9, but every time I read an article on warp drive, I expend so much mental energy trying to wrap my head around the concept that my entire left hand side goes numb. Somewhere along the line my understanding of concepts such as the nature of Spacetime is deficient. Here's the problem. When I think about the idea of expanding the conceptual framework that describes the continuum between two abstract concepts, behind a spaceship, whilst contracting the conceptual framework that describes the continuum between two abstract concepts, in front of a spaceship; all I can think of is that this like saying that when in conversation with another person, I can reach out with my hand, grasp hold of the words that are coming out of that other persons mouth and fold them in half. If someone could point me towards some legible books that I could buy that would help me understand where my understanding has gone wrong, I would be grateful. Thanks.

Thinking at the intersection of Einstein and DaVinci. | EdgeDweller At EdgeDweller, we understand and thrive on the fundamentals of growth and transformation. After decades of analyzing our own thinking processes and those of some of the most respected minds in the world, we have discovered how to refresh and reignite genius levels of creativity and imagination that we believe to be innate. As practitioners of genius thinking patterns we move fluidly from visual to verbal, balancing creativity with infrastructure and action plans to help you and your company perform at above industry average rates in the marketplace.. Susan Reed Susan Reed has helped launch more than 150 products and services for 122 brands representing more than 25 industries. A strategist, author and national speaker, Susan Reed specializes in high impact programs for corporations, strategic business units, nonprofits, individuals and small groups. Rick Anwyl “Making the nearly impossible a reality” is Rick’s contribution to EdgeDweller thinking. Tim Kirkwood Joy McCarthy, Ph.D.

Writing IF Picking a language One of the first decisions you’ll need to make before you do serious work on your own piece of interactive fiction is what tools you will use to create it. While you could program IF in a general purpose programming language, most people choose to use a language or design system specially created for writing IF. This reduces the amount of work involved, and it usually produces a more polished, more widely-portable product, as well. Even so, there are quite a few different options, from simple graphical interfaces that allow you to choose functionality from menus to sophisticated and powerful programming languages. Your choice may also be affected by the format you want your work to take. My own interactive fiction has been written in Inform 6 and Inform 7. Studying design Another thing you may want to do before beginning your own game is to familiarize yourself with the field. Studying code style Creation process Polishing your work Publishing

Best U.S. Job: Become a Farmer to Make More than a Banker If you want to become rich, Jim Rogers, investment whiz, best-selling author and one of Wall Street's towering personalities, has this advice: Become a farmer. Food prices have been high recently. Some have questioned how long that can continue. It's been decades since the American heartland has been a money pump and longer since farming was a major source of employment. But in the past few years, thanks to a wealthier (and hungrier) emerging-market middle class and a boom in biofuels, the business of growing has once again become a growth business. These days, a trip to Grand Island, Neb., a city of 48,500 surrounded by farms, is a trip to an economic bizarro land. Even housing has done well in the past few years. Even with the recent uptick, however, agriculture accounts for only 1% of U.S. But some experts believe agriculture can do more to fuel job growth.

Why Is Facebook Blue? The Science Behind Colors In Marketing Editor's Note: This is one of the most-read leadership articles of 2013. Click here to see the full list. Why is Facebook blue? Not highly scientific, right? So how do colors really affect us, and what is the science of colors in marketing, really? First: Can you recognize the online brands just based on color? Before we dive into the research, here are some awesome experiments that show you how powerful color alone really is. Example 1 (easy): Example 2 (easy): Example 3 (medium): Example 4 (hard): These awesome examples from YouTube designer Marc Hemeon, I think, show the real power of color more than any study could. How many were you able to guess? Which colors trigger which feeling for us? Being completely conscious about what color triggers us to think in which way isn’t always obvious. Black: Green: Blue: Clearly, every one of these companies is seeking to trigger a very specific emotion: When we feel compelled to buy something, color can play a major role.

business - Online Freelance Marketplaces Find freelance projects--and get your revenue rolling--with this review of some of the top freelance marketplaces on the web. The world of virtual employees is here, and businesses everywhere are recognizing the benefits of contracting with freelancers instead of hiring permanent workers. What's driving this trend? Business owners are discovering that there's often a better value for their dollar when they hire freelancers. And they're able to choose from an almost unlimited field of skill-sets for each specific project they need help with. With the freelance industry worth millions of dollars worldwide, as a freelancer, you have the ability to start a profitable business with a very low investment as well as have the flexibility to work almost anywhere, anytime. But just where do you find the work? Guru.com With a service provider base of more than 481,000, Guru.com is the largest freelance exchange on the web. GetAFreelancer.com This is Europe's answer to the U.S.

Wi-Fi signals enable gesture recognition throughout entire home (w/ Video) (Phys.org) —Forget to turn off the lights before leaving the apartment? No problem. Just raise your hand, finger-swipe the air, and your lights will power down. University of Washington computer scientists have developed gesture-recognition technology that brings this a step closer to reality. By using an adapted Wi-Fi router and a few wireless devices in the living room, users could control their electronics and household appliances from any room in the home with a simple gesture. "This is repurposing wireless signals that already exist in new ways," said lead researcher Shyam Gollakota, a UW assistant professor of computer science and engineering. The UW research team that includes Shwetak Patel, an assistant professor of computer science and engineering and of electrical engineering and his lab, published their findings online this week. Error loading skin: Invalid XML When a person moves, there is a slight change in the frequency of the wireless signal.

The Forerunners Of Future Sexbots, Now ⚙ Co Since I’ve started tracking the story of sexual computing I’ve received many emails and countless tweets stating that while developers and engineers may be working on sexbots and other sexual technologies, no “normal” person would ever use such tech in their sex life. But now thanks to a few recent surveys we know that’s just not true. Here’s the first, as Alexis Kleinman writes for The Huffington Post: Nearly 20 percent of young adult smartphone owners in the U.S. between the ages of 18 and 34 use their smartphones during sex, and nearly 1 in ten U.S. adults who own smartphones use them during sex. While this survey was conducted with a fairly large sampling size of 1,100 people, it did not specifically ask respondents what they were using their smartphones for while having sex. And while checking your phone--or even using it to enhance your technique--in the sack is one thing, surely no one but a pervert would ever sleep with a real sexbot, right? Wrong. To put that another way: No.

Modern Mechanix African Futures | Aesthetics of the Anthropocene Matthew Omelsky “After the End Times”: African Futures and Speculative Fictions Our current historical moment, as Slavoj Zizek has put it, is one of “apocalyptic time.” Written nearly a century ago, in a radically different moment of social crisis, Ernst Bloch’s The Spirit of Utopia (1918) speaks hauntingly to our current impaired vision. In recent years, African artists have begun to articulate this “moment after,” ushering in a new paradigm in African literature and film that speculates upon post-crisis African futures. The coupling of Wanuri Kahiu’s short film Pumzi (2010) and Efe Okogu’s short story “Proposition 23” (2012) provides a productive point of entry into this emergent field in African cultural production. At stake in the work of Okogu and Kahiu is a nascent politics and aesthetics of the African Anthropocene. African topographies The distinctly African topographies in Pumzi and “Proposition 23” are of a dying, if not altogether dead, earth. Neuropolitics African futures now

12 Stories You Need To Know Today This article titled “Do online courses spell the end for the traditional university?” was written by Carole Cadwalladr, for The Observer on Sunday 11th November 2012 00.01 UTC Two years ago, I sat in the back seat of a Toyota Prius in a rooftop car park in California and gripped the door handle as the car roared away from the kerb, headed straight towards the roof’s edge and then at the last second sped around a corner without slowing down. There was no one in the driver’s seat. It was the prototype of Google’s self-driving car and it felt a bit like being Buck Rogers and catapulted into another century. A few months later, the New York Times revealed that Thrun was the head of Google’s top-secret experimental laboratory Google X, and was developing, among other things, Google Glasses – augmented reality spectacles. The self-driving car, the glasses, Google X, his prestigious university position – they’d all gone. “It’s going to change. CS221 is a demanding, difficult subject.

Science, Technology, and Human Responsibility Time Regained! by James Gleick Time Reborn: From the Crisis in Physics to the Future of the Universe by Lee Smolin Houghton Mifflin Harcourt, 319 pp., $28.00 A pregnant moment in intellectual history occurs when H.G. What is time? Wells didn’t make this up. So spacetime was born. Philosophers like it, too. Moreover, it is solved by physics and not by philosophy. “Indeed,” he added, “I do not believe that there are any longer any philosophical problems about Time.” Now comes a book from the theoretical physicist Lee Smolin aiming to convince us that time is real after all. I used to believe in the essential unreality of time. I no longer believe that time is unreal. Smolin is a founder and faculty member of the Perimeter Institute for Theoretical Physics in Waterloo, Ontario, an authority on quantum gravity who has also written on elementary particle theory, cosmology, and the philosophy of science. This is the view that most physicists deny and the view that Smolin proposes to demonstrate in his book. You cannot. H.G.