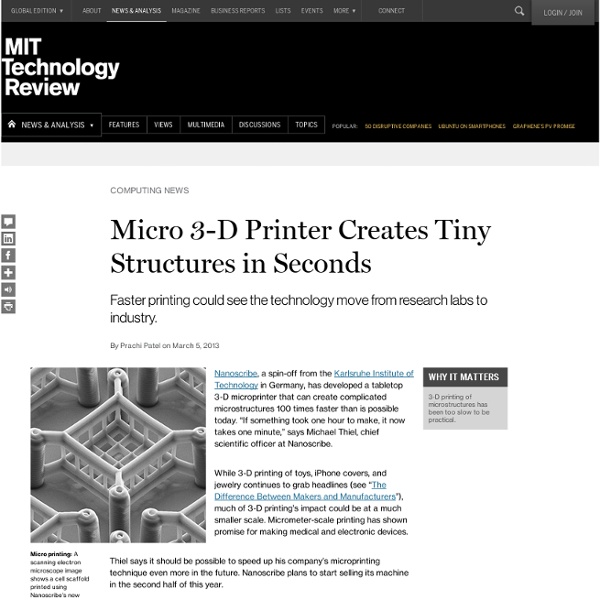 Nanoscribe, a spin-off from the Karlsruhe Institute of Technology in Germany, has developed a tabletop 3-D microprinter that can create complicated microstructures 100 times faster than is possible today. “If something took one hour to make, it now takes less than one minute,” says Michael Thiel, chief scientific officer at Nanoscribe. While 3-D printing of toys, iPhone covers, and jewelry continues to grab headlines (see “The Difference Between Makers and Manufacturers”), much of 3-D printing’s impact could be at a much smaller scale. Micrometer-scale printing has shown promise for making medical and electronic devices. Thiel says it should be possible to speed up his company’s microprinting technique even more in the future. Nanoscribe plans to start selling its machine in the second half of this year. So far, 3-D microprinting has been used only in research laboratories because it’s pretty slow. The technology behind most 3-D microprinters is called two-photon polymerization.

The Printer That Can Print A 2,500 Square Foot House In 20 Hours. We have seen huge advancements in 3D printing. We’ve even seen oversized wrenches printed that measure 1.2 meters in length. Now, we can print an entire 2,500 sqft house in 20 hours. In the TED Talk video below, Behrokh Khoshnevis, a professor of Industrial & Systems Engineering at the University of Southern California (USC), demonstrates automated construction, using 3D printers to build an entire house in 20 hours. In manufacturing we use a process called CAD/CAM (computer-aided design / computer-aided manufacturing). 3D models are designed on a computer and then manufactured using CNC Machines or 3D printers. The design is manufactured into a physical object automatically, with instruction from 3D computer model to physical object without human interface. In this video, we see a prototype of a machine called ‘Contour Crafting’ Michael Cooney Michael Cooney, the founder of EngNet, worked as a project engineer for many years sourcing equipment.

Flo N' Go - Home - Scepter's patented "Flo n' go" gas pump handle allows you to stop and restart the flow of gas and is designed to eliminate gas spills and overfills. Drink This! Cup Show 2014 Photos » Workhouse Ceramics Drink This! Workhouse International Ceramic Cup Show 2014 Drink This! Thank you! Pam Eisenmann- Co-CuratorJoan Ulrich- Co-CuratorDale Marhanka-Ceramics Director Cups are probably one of the most unassuming, yet challenging forms to make. Potters seem to be quite particular about what they like about cups and why. I was so inspired to see such a diverse range of cup forms, surfaces, decoration and building processes. Each of us will have different visceral reactions to different pots based on our own personal histories. Juror-Sam Chung Awards 1st Place - $250-Nicole Aquillano-Massachusetts 2nd Place - $150- Brad Willis-Massachusetts 3rd Place - $100-Jess Carter-Florida Honorable Mentions Richard Peterson-Ohio Ted Neal-Indiana Stephanie Wright-Maine Lauren Karle-Kansas Suzanne Wolfe-Hawaii Abel Lakatos-Hungary Exhibit Photos

Vikings – Watch Online | Full Episodes on History Season five begins with Ivar the Boneless asserting his leadership over the Great Heathen Army, while Lagertha reigns as Queen of Kattegat. Ivar’s murder of his brother Sigurd sets the stage for vicious battles to come as Ragnar’s sons plot their next moves after avenging their father’s death. Bjorn follows his destiny into the Mediterranean Sea and Floki who is suffering from the loss of his wife Helga, takes to the seas submitting himself to the will of the Gods. Get the new Vikings VR app. Read the latest Vikings news. Learn more about the series Real Vikings, which sees actors Clive Standen (starring in Global's Taken), Katheryn Winnick and others joining the world’s top experts at key Viking sites. Explore more behind the scenes with Vikings: A World Revealed, an interactive journey into the making of Vikings guided by stars of the show: Travis Fimmel, Linus Roache, Katheryn Winnick, Alyssa Sutherland and Moe Dunford.

Deep Watering Tomatoes for a Bumper Crop | Reclaim, Grow, Sustain As the plant that often seems to be the central highlight of the summer gardening season for most folks, everyone wants the biggest and shiniest tomatoes possible. So there are no shortage of tips and tricks out there to develop the size and sheen of tomatoes. But most of these tips and tricks only slightly improve the plant's production, many of them seeming to do nothing at all - mental bias and imagination can go a long way in supporting useless tricks. Well, here's one method that the people who try it have a hard time not noticing a difference in their plants. Now why would you want to water deeper in the first place? Not to forget, there's also the added benefits of being very water efficient as well as reducing blight because water won't be splashing all over the plant. Now here's how you do it. Dig a hole on either side of where you're going to have a tomato plant. Place a piece of perforated pipe about 16"-20" long in each hole.