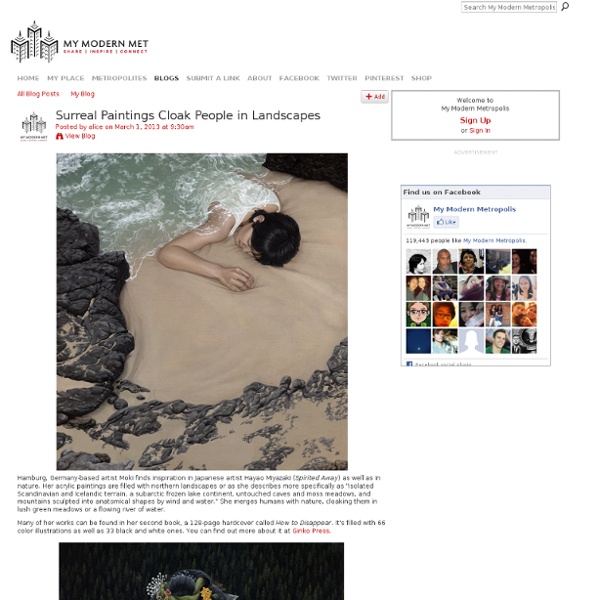 Berlin, Germany-based artist Moki finds inspiration in Japanese artist Hayao Miyazaki's work (Spirited Away) as well as in nature. Her acrylic paintings are filled with images of northern landscapes or as she describes more specifically as "isolated Scandinavian and Icelandic terrain, a subarctic frozen lake continent, untouched caves and moss meadows, and mountains sculpted into anatomical shapes by wind and water." Moki merges humans with nature, cloaking them in lush green meadows or a calm sea of water. When asked why she combines humans with nature, Moki said, "The beings disappearing in my paintings illustrates the state of mind when you cannot distinguish between you and the other, that feeling of awareness for what surrounds you. Chinese philosopher Zhang Zhou wrote about the Zhuangzi butterfly in one of his books, "Once Zhuangzi dreamt he was a butterfly, a butterfly flitting and fluttering around, happy with himself and doing as he pleased. He didn't know he was Zhuangzi.

15 Amazing Animated Short films We all love short animated films, but creating short film is very hard task. Putting whole story in 5 to 10 minutes is not easy. Can you imagine? Few films produced after working hard more than 6 years! How to photograph reflections in puddles Want to shoot an original image of a familiar landmark? Or perhaps a quirky portrait of a friend? In this tutorial we’ll show you how to photograph reflections in puddles to create pictures that look different than the norm. Here at Digital Camera World we try to avoid shooting in the historic city of Bath, England, not least because it’s right on our doorstep, which means we’ve done it to death.

Biblical Meditation Introduction Scripture declares of God’s thoughts, Each of these are opposed to and work against developing and maintaining the mind of Christ through studying and meditating on the Word. They are designed to keep us out of the Word which is so essential to our ability to avoid the delusions of Satan and the world system and to hear and respond to the call of God on our lives. What Does It Mean to Meditate? The first question we must consider concerns the meaning of meditation and what meditation involves. Jen Mann's Return Today, we revisit artist Jen Mann since her last two previous features back in September 2011 and May 2010. Mann is currently based out of Ontario, Canada where she continues to produce oil on canvas paintings. African Philosophy The Kenyan philosopher Henry Odera Oruka distinguishes what he calls four trends in African philosophy: ethnophilosophy, philosophic sagacity, nationalistic-ideological philosophy, and professional philosophy. In fact it would be more realistic to call them candidates for the position of African philosophy, with the understanding that more than one of them might fit the bill. Ethnophilosophy involves the recording of the beliefs found in African cultures.

Crazy Awesome Paintings by Vladimir Kush Here is a collection of the incredible paintings of Vladimir Kush. Vladimir has been creating these surrealistic paintings since the late 80’s. I’m extremely impressed by his work, and you should be as well! How does anesthesia disturb self-perception? An Inserm research team in Toulouse, led by Dr Stein Silva (Inserm Unit 825 "Brain imaging and neurological handicaps"), working with the "Modelling tissue and nociceptive stress" Host Team (MATN IFR 150), were interested in studying the illusions described by many patients under regional anaesthetic. In their work, to be published in the journal Anesthesiology, the researchers demonstrated that anaesthetising an arm affects brain activity and rapidly impairs body perception. The ultimate aim of the work is to understand how neuronal circuits are reorganised at this exact moment in time and to take advantage of anaesthesia to reconfigure them correctly following trauma. This would allow anaesthetic techniques to be used in the future to treat pain described by amputated patients in what are known as "phantom limbs." Neuroscience research in recent years has shown that the brain is a dynamic structure.

Japanese calligraphy Japanese calligraphy (書道, shodō?) is a form of calligraphy, or artistic writing, of the Japanese language. For a long time, the most esteemed calligrapher in Japan had been Wang Xizhi, a Chinese calligrapher in the 4th century, but after the invention of Hiragana and Katakana, the Japanese unique syllabaries, the distinctive Japanese writing system developed and calligraphers produced styles intrinsic to Japan. Japanese mythology Japanese myths, as generally recognized in the mainstream today, are based on the Kojiki, the Nihon Shoki, and some complementary books. The Kojiki, or "Record of Ancient Matters", is the oldest surviving account of Japan's myths, legends and history. The Shintōshū describes the origins of Japanese deities from a Buddhist perspective, while the Hotsuma Tsutae records a substantially different version of the mythology. One notable feature of Japanese mythology is its explanation of the origin of the imperial family which has been used historically to assign godhood to the imperial line.

Shinto Shinto priest and priestess. Shinto (神道, Shintō?), also kami-no-michi,[note 1] is the indigenous religion of Japan and the people of Japan.[2] It is defined as an action-centered religion,[3] focused on ritual practices to be carried out diligently, to establish a connection between present-day Japan and its ancient past.[4] Founded in 660 BC according to Japanese mythology,[5] Shinto practices were first recorded and codified in the written historical records of the Kojiki and Nihon Shoki in the 8th century. Still, these earliest Japanese writings do not refer to a unified "Shinto religion", but rather to a collection of native beliefs and mythology.[6] Shinto today is a term that applies to the religion of public shrines devoted to the worship of a multitude of gods (kami),[7] suited to various purposes such as war memorials and harvest festivals, and applies as well to various sectarian organizations.