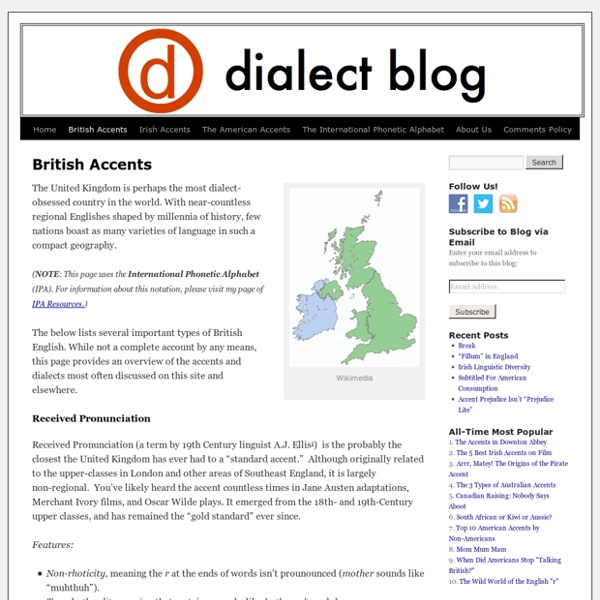 Wikimedia The United Kingdom is perhaps the most dialect-obsessed country in the world. With near-countless regional Englishes shaped by millennia of history, few nations boast as many varieties of language in such a compact geography. (NOTE: This page uses the International Phonetic Alphabet (IPA). For information about this notation, please visit my page of IPA Resources.) The below lists several important types of British English. Received Pronunciation Received Pronunciation (a term by 19th Century linguist A.J. Features: Non-rhoticity, meaning the r at the ends of words isn’t prounounced (mother sounds like “muhthuh”).Trap-bath split, meaning that certain a words, like bath, can’t, and dance are pronounced with the broad-a in father. Speech Samples: Cockney Cockney is probably the second most famous British accent. Estuary English (Southeast British) Estuary is an accent derived from London English which has achieved a status slightly similar to “General American” in the US. Geordie 1.

British Slang If you’re planning on visiting London in the future, you might just want to familiarise yourself with some British Slang expressions that are very commonly used by the British. They will be very useful particularly if you’re likely to be socialising with Londoners. 1. “Mind The Gap” speak with an Irish accent? Come here, boyo, let's not misunderstand each other: you're not going to be able to sound like a Dubliner by the end of this article. Many have tried, many have failed: Brad Pitt in The Devil's Own, Val Kilmer in The Ghost and the Darkness, Richard Gere in The Jackal, Tom Cruise in Far and Away. God almighty, they were all bollocks! But it's not just the lads - the colleens are useless too: Julia Roberts in Michael Collins.

Geordie dialect Geordie: A Regional Dialect of English Most of us have a vague sense of the accents and dialects spoken in different parts of the UK, such as Cockney or Brummie. But have you ever wondered what exactly constitutes a dialect and accent or why they exist at all? Use the links below to hear a series of audio clips demonstrating the typical features associated with one variety of English: the Geordie dialect. What is Geordie? The word Geordie refers both to a native of Newcastle-upon-Tyne and to the speech of the inhabitants of that city. 12 Horrible Gobbledygook Words We Reluctantly Accepted Just as there is nothing certain in this world but death and taxes, there is nothing certain in language but that it will change, and that people will react badly. One of the changes people find most offensive is the spread of professional jargon that has been coined to replace simpler, clearer words we already have. Anyone up for some collaborative incentivizing going forward? No? Well, maybe one day your great-grandchildren will be.

English accents The BATH Map (Variation) Phonological variation — differences between accents — comes in a variety of forms. Some speakers might be difficult to place geographically, while others who speak with a broader accent might use a number of localised pronunciation features. This might include the articulation of certain consonant or vowel sounds. It might be apparent in so-called connected speech processes — the way certain sounds are pronounced in particular combinations of words or phrases. Or it might be revealed in characteristic intonation patterns.

English Vowel Chart - Improve Your Accent All the words on the chart have been carefully selected so that they form minimal pairs. beat and bit are an example of a minimal pair. The words sound the same apart from one sound – the vowel in the middle. Notice the IPA transcriptions: /biːt/ – /bɪt/. By listening to minimal pairs, you can hear the difference between vowels more easily.

Sounds Familiar? What you can hear You can listen to 71 sound recordings and over 600 short audio clips chosen from two collections of the British Library Sound Archive: the Survey of English Dialects and the Millennium Memory Bank. You’ll hear Londoners discussing marriage and working life, Welsh teenagers talking with pride about being bilingual and the Aristocracy chatting about country houses. You can explore the links between present-day Geordie and our Anglo-Saxon and Viking past or discover why Northern Irish accents are a rich blend of seventeenth century English and Scots.

New dictionary records 4,000 Yorkshire dialect words Media playback is unsupported on your device More than 4,000 words have been collated in a newly published dictionary of Yorkshire dialect terms. From abbeystead to yower - a term for a sheep's udder - it features words that were in use between about 1100 to 1800. The entries were from documents such as 12th Century monastic records, probate inventories and church court papers. Editor Alexandra Medcalf said through the dictionary it was possible to "track Yorkshire's history through its language use". 12 Awesome Language Resources for the Word Nerd I’m an unabashed word nerd. I majored in English and have been a high school English teacher for almost 30 years. I run an online program helping homeschoolers develop writing skills, and I manage this wordy blog and a wordy Facebook page. I have become, over the years, something of an expert on grammar and usage, but it’s not due to any particular cleverness on my part. I have simply learned how to ask good questions and find reliable answers.

theconversation If you struggle to understand the teenagers and young people around you when they call their schoolfriend a durkboi and try to cadge some peas, you are not alone. The idea that they are communicating in a different language from their parents has been the subject of excited chatter on parenting websites and among some researchers. A defining characteristic of youth slang is thought to be its faddishness – the fact that terms have a rapid turnover, quickly coming in and out of fashion and then disappearing before parents and teachers have time to decode them.