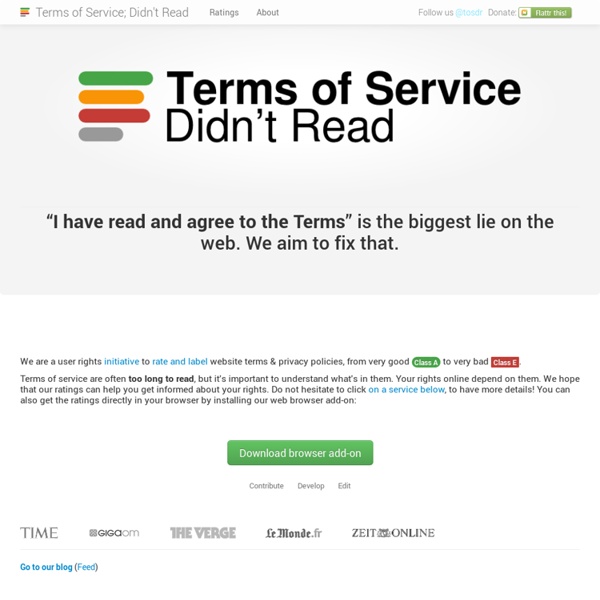 We are a user rights initiative to rate and label website terms & privacy policies, from very good Class A to very bad Class E. Terms of service are often too long to read, but it's important to understand what's in them. Your rights online depend on them. We hope that our ratings can help you get informed abour your rights. Do not hesitate to click on a service below, to have more details! You can also get the ratings directly in your browser by installing our web browser add-on:

NSA surveillance: how to stay secure Now that we have enough details about how the NSA eavesdrops on the internet, including today's disclosures of the NSA's deliberate weakening of cryptographic systems, we can finally start to figure out how to protect ourselves. For the past two weeks, I have been working with the Guardian on NSA stories, and have read hundreds of top-secret NSA documents provided by whistleblower Edward Snowden. I wasn't part of today's story – it was in process well before I showed up – but everything I read confirms what the Guardian is reporting. At this point, I feel I can provide some advice for keeping secure against such an adversary.

Collusion — mozilla.org About this Add-on Using interactive visualizations, Lightbeam enables you to see the first and third party sites you interact with on the Web. As you browse, Lightbeam reveals the full depth of the Web today, including parts that are not transparent to the average user. Using two distinct interactive graphic representations — Graph and List — Lightbeam enables you to examine individual third parties over time and space, identify where they connect to your online activity and provides ways for you to engage with this unique view of the Web.

Mystery as spiral blue light display hovers above Norway By Mail Foreign Service Updated: 15:15 GMT, 10 December 2009 What's blue and white, squiggly and suddenly appears in the sky? If you know the answer, pop it on a postcard and send it to the people of Norway, where this mysterious light display baffled residents yesterday. Speculation was increasing today that the display was the result of an embarrassing failed test launch of a jinxed new Russian missile. The Bulava missile was test-fired from the Dmitry Donskoi submarine in the White Sea early on Wednesday but failed at the third stage, say newspapers in Moscow today.

The 32 Totally Essential (and Free) Apps for Every New PC You have to admit, Windows is a pretty barebones operating system, feature-wise. After a fresh install of XP or Vista (perhaps following a Clean Start), you're faced with a barren Start Menu and an empty desktop that's beaming with limitless potential. The problem is that it's up to you to hunt and download those applications that you really need in your day-to-day computing experience. And chances are, it's often difficult to find good software that's also free. That's where this guide comes in.

Getting Started with R – RStudio Support New to R? There are hundreds of websites that can help you learn the language. Here's how you can use some of the best to become a productive R programmer. Start by downloading R and RStudio. Learn the basics Visit Try R to learn how to write basic R code. 12 Video Sites That Are Better Than YouTube There’s little doubt that YouTube is the go-to video site for many people. In fact, it’s one of the most popular websites in the world. But what if YouTube happens to be inaccessible? 15 Cool and Useful Kitchen Tools Creative gadgets and inventions designed for people who love to cook. Avocado Cuber Useful tool designed for cutting uniform-sized cubes of avocado. [link] Paper Plane Cheese Grater

Radical Sharing Works: This Guy Lets the World Use His Starbucks Card for Free (UPDATED) - Business Download this image to your phone, take it to Starbucks and scan it at the cash register: It'll get you a free coffee. It's part of a radical experiment in sharing that's teaching us something about mobile money in the process. "It's been extremely uplifting," Jonathan Stark tells GOOD.

10 Xbox 360 tricks Microsoft won't tell you 1. Connect your Xbox 360 to two screens at once If you've got one of the component/composite dual video cables – the one that comes in the box with most 360s – you can have your console display its gamey goodness on two TVs simultaneously.

“I have read and agree to the Terms” is the biggest lie on the web. We aim to fix that. by khomille Feb 16