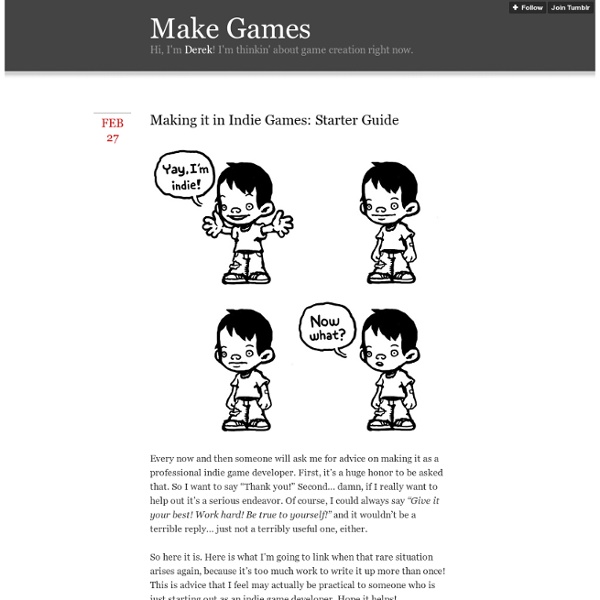 Modern OpenGL resources round up With the fundamental shift from a fixed to a programmable pipeline, finding modern style OpenGL resources can prove a bit tricky. Therefore I have put this page together to show a collection of useful modern GL related links, books and materials. If I missed something you believe I should add, please let me know! Tutorials, Wikis and eBooks The OpenGL wiki, probably the place you should start. Specs and documentation for OpenGL. A series of 40 OpenGL tutorials including lighting, shading, normal mapping, skeletal animation and more. Actually an ebook, covers most of OpenGL Another series of OpenGL tutorials covering a range of subjects and bordering on being an ebook. A series of OpenGL tutorials for OpenGL 3.3 and higher. Another ebook on OpenGL, some on 3.3, some on 4.0. Code Samples

Visualizing the Creative Process As I coach new developers, I've taken to scribbling out the same useful diagram for visualizing the creative process again and again on coffee-ringed napkins. In order to limit my future abuse of culinary paper wares, I've reproduced my images in a more formal fashion in this essay. The conversation usually starts with the following statement: "Creativity is like a snake swallowing a series of tennis balls." And when confused looks inevitably result, I sketch some variant of this odd little picture: Using this as a starting point, we start chatting about joys and pitfalls of creativity.The Brainstorming PhaseFailures in brainstormingThe Culling PhaseFailures in cullingCyclingFailures in cycling The Brainstorming Phase We all start with an idea. Brainstorming starts out small and expands over time There are several activities that occur during this phase:Ideas: Generate new ideas related to your initial insight. A multitude of experiments arise during brainstorming Problems with brainstorming

Anyone Can Learn to Make a Game by Richard Hart Maybe you've just come up with a great new idea. Perhaps you've always been curious how video games are made or wanted to learn how to make them yourself. Maybe you're feeling a little intimidated and not sure where to begin. Find out how my course has helped over 2300 students successfully learn to make games with Unity 3D and made this the most popular Unity course on Udemy! Imagine being able to take your game ideas and make them a reality. Picture your games bringing joy and entertainment into the lives of people from around the world. What would it be like to have your games running on over 1 billion mobile devices? Hi, I'm Richard Hart. I'm a professional interactive developer and technology instructor with over a decade of experience. I created this course because I wanted to make gaming accessible to anyone who wants to learn, regardless of their previous background. I've literally taught thousands of students how to master technology and I can teach you too. Bonus Sections

Using Potential Fields in a Real-time Strategy Game Scenario (Tutorial) Editor’s note: This in-depth article was submitted by Johan Hagelbäck, lecturer and Ph.D. researcher in adaptive game AI. If you’d like to join Johan and myself (Alex J. Champandard) for a live online masterclass (public) on Wednesday, February 4th at 21:00 CET Europe, 15:00 East Coast, then go to live.aigamedev.com for more details. Bots for RTS games may be very challenging to implement. This is a tutorial about an unconventional planning and navigation method that uses multi-agent potential fields. What is a Potential Field? PF’s has some similarities with influence maps. Figure 1: Influence map showing the areas occupied by own units (red) and enemy units (blue). Potential fields work in a similar manner. Figure 2a: An attractive charge (E) is placed in the destination for an own unit (green). Figure 2b: The charge generates a field that spreads in the game world. Figure 2c: The field have spread throughout the game world and gradually fades to zero. Figure 4: Two own units added.

Making Games with Construct2 It's a real treat! A 4 weeks course on the basics of making HTML5 games with construct 2. For those who don't know construct 2, it's a very easy to use game making tool. (You can download it for free) HTML5 is a technology compatible with desktop computers, iOS, Android, and Windows8 devices. It's free, and it's designed to work on the free version of Construct2. This course will be LIVE every saturday evening (GMT+1) during 4 weeks. you'll see Yann or Kyatric using Construct 2 directly on screenyou'll hear one of us liveyou'll be able to directly ask us any questionif you miss the session, don't worry, the session will be recorded (on twitch and then uploaded on youtube) and directly replayable. You'll be able to talk to us via a chatroom. On top of these 4 live sessions, we'll be available all week on reddit and scirra's forums to answer any question about this course. You'll learn many of C2's cool features. And that's only what we assure will be during the live courses.

Tag Search - Walkthrough Guides, Reviews, Discussion, Hints and Tips at Jayisgames Games Featured: • elarel • Jerry Clouds • Amulets and Armor Nothing like a little nostalgia to start the weekend! Be warned, though. This nostalgia comes with a price. Ironclad Tactics is a turn-based strategy game created by Zachtronics, the studio behind The Codex of Alchemical Engineering and SpaceChem. I think we should have some bonding time. Zombies and Cheepies and Succubbi, oh my! Games Featured: • Gemdancer • Don't Move • Super Amazing Quest Everyone can relax, Friday the 13th has ended. OrangePixel has done it again! Coming next year to PC and consoles if this Kickstarter has anything to say about it, Shantae: Half-Genie Hero stars Shantae, who, after having a nightmarish vision of an ancient evil about to rise, embarks on a platforming action adventure to stop it using her unique abilities. In this chilling indie horror game, our protagonist awakes, dizzy and disoriented, in a dark and silent house, in a bed surrounded by a cage whose door has just been opened. 1897.

Spacescape - Space Skybox Tool petrocket wrote: roimatola wrote:Well, now i tried it in two different computers and the file keeps arriving corrupted :S This really looks cool, i would love to give it a try.. What zip software are you using? hrm, I used Vista's built in zip creator. I tested the file fron that link. 2 demos of the Ogre library that use fragment shaders can't run on my computer, they crash with a message that says my GPU does not support fragment programs, but your program works beautifully One problem i found:Most of the time i run Firefox, some game (on-line or not) and the apps i'm testing or developing, in that case your app. My suggestions are:1 - Add a progress bar, or some type of "working" indicator, in any operation that takes time to finish, like loading.2 - Add some information in all arguments of the layers, the information can be show in the status bar of your application while the user move the mouse over the value or name of the argument.3 - Like spacegaier said.

RGCD Multi-textured Terrain in OpenGL | 3D Game Engine Programming Terrain Sample In this article I will demonstrate one possible way to generate multi-textured terrain using only the OpenGL rendering pipeline. This demo uses the GL_ARB_multitexture and GL_ARB_texture_env_combine OpenGL extensions to do the multi-textured blending based on the height of the vertex in the terrain. I will also use the GL_ARB_vertex_buffer_object extension to store the terrain’s vertex information in the GPU memory for optimized rendering. I will not show how to setup an application that uses OpenGL. Terrain rendering is a common task for game programmers. In this simple demo application, I do not try to demonstrate a class that provides a lot of flexibility for the game designer as my goal for this demo is not flexibility but simplicity. A few dependencies are used by this project to ease the coding process and to make the material more readable. The only class that is required for this demo is the Terrain class. The terrain class will have some basic functionality. and

TIGSource OpenGL:Tutorials:3D Textures An OpenGL 3d Texturing Tutorial This tutorial is intended to demonstrate 3-dimensional texturing (not to be confused with simply texturing a 3d object) in OpenGL and familiarize the reader with its use. Familiarity with OpenGL 2D textures is assumed. The provided example was developed on Visual Studio .NET under Windows XP Professional. Questions and comments welcome, flames should be sent to /dev/null. Though three dimensional texturing has been adopted into the OpenGL 1.2 specification by the ARB, at the time of this writing it is still necessary to the use extension header files available at glxext.h is for X, wglext.h is for Windows, glext.h is for all operating systems. Terms: Texel A texture element, in the same sense that a pixel is a picture element. Sample source Sample source (Converted to GLUT) Setting up a Window In order to render a 3D textured object using OpenGL it is necessary to have a window ready to render OpenGL. Sample source

Indie PC game Surviving the end of the world, in a game, usually means there’s a combat-heavy journey ahead of you across irradiated wastes. Not so in Sheltered, Unicube’s management sim. The survivors in question are a family, and they are already safe (relatively) in their underground shelter. This is a game about keeping them that way. Read and Comment With PC retail coughing up its lungs, only kept alive by life support, it is rather peculiar to see Coffee Stain’s joke prototype turned commercial game, Goat Simulator, get a retail release. It’s being brought to stores next month after Dead Island and Metro publisher Deep Silver acquired distribution rights. Read and Comment User submitted content by BulbBoyTeam Bulb Boy Comment Bulb Boy is a 2D point & click horror adventure about a boy with a glowing head (alright, it's a bulb...) inspired by Machinarium and Gobliiins. Devolver Digital just celebrated its fifth anniversary. But first they had to fail. Read and Comment Read and Comment Spotlight Comment

OpenGL Video Tutorial - Lighting Lighting in OpenGL One way we can make our scenes look cooler is by adding light to them. In this lesson, we're going to scrap the scene from our previous lessons and make a new one. We'll make a box-shaped object, with the top and bottom removed. Look at the source code. The first new thing is the call to glEnable(GL_LIGHTING) in initRendering. Now, go to the drawScene function. GLfloat ambientColor[] = {0.2f, 0.2f, 0.2f, 1.0f}; glLightModelfv(GL_LIGHT_MODEL_AMBIENT, ambientColor); First, we add some ambient light, which shines the same amount on every face in our scene. To add ambient light, we call glLightModelfv with GL_LIGHT_MODEL_AMBIENT as the first argument and an array of four GLfloats for the second argument. The first three floats represent the RGB intensity of the light. GLfloat lightColor0[] = {0.5f, 0.5f, 0.5f, 1.0f}; GLfloat lightPos0[] = {4.0f, 0.0f, 8.0f, 1.0f}; glLightfv(GL_LIGHT0, GL_DIFFUSE, lightColor0); glLightfv(GL_LIGHT0, GL_POSITION, lightPos0); Spiffy, isn't it?