3 Paths Toward A More Creative Life 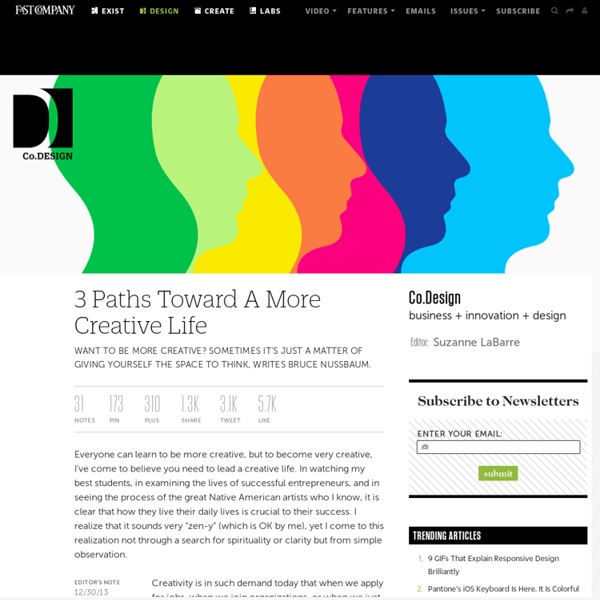 Everyone can learn to be more creative, but to become very creative, I’ve come to believe you need to lead a creative life. In watching my best students, in examining the lives of successful entrepreneurs, and in seeing the process of the great Native American artists who I know, it is clear that how they live their daily lives is crucial to their success. I realize that it sounds very “zen-y” (which is OK by me), yet I come to this realization not through a search for spirituality or clarity but from simple observation. Creativity is in such demand today that when we apply for jobs, when we join organizations, or when we just meet other people, we are asked to present our creative selves. But we can’t do that unless we understand the nature of our own creativity, locate the sources of our originality, and have a language that explains our work. If you are one of the growing number of “creatives,” or want to become one, you need to lead a creative life. 1. For good reason. 2. 3.

A More Resilient Species “A playful brain is a more adaptive brain,” writes ethologist Sergio Pellis in The Playful Brain: Venturing to the Limits of Neuroscience. In his studies, he found that play-deprived rats fared worse in stressful situations. In our own world filled with challenges ranging from cyber-warfare to infrastructure failure, could self-directed play be the best way to prepare ourselves to face them? In self-directed play, one structures and drives one’s own play. Self-directed play is experiential, voluntary, and guided by one’s curiosity.

Summary: The Work of Art in The Age of Mechanical Reproduction February 28, 2008 by ginal In his essay, “The Work of Art In The Age of Mechanical Reproduction”, Walter Benjamin discusses a shift in perception and its affects in the wake of the advent of film and photography in the twentieth century. He writes of the sense changes within humanity’s entire mode of existence; the way we look and see the visual work of art has is different now and its consequences remain to be determined. How does human sense perception related to history? Is it a universal perspective that is being critiqued here? Can there be a universal perspective in the first place? Jared Leto headlines Adweek L.A. Issue with roundtable at Funny or Die More than any city in the world, Los Angeles defines creativity. It is shaped by a massive entertainment industry, storied creative agencies and a burgeoning maker and startup culture. But its creative energy also is driven by the powerful intangibles of optimism and renewal.

How To Tell If You're Creative (Hint: You Might Be A Bit Of A Jerk) Forget Myers-Briggs. A study out of BI Norwegian Business School has determined the signposts of a "creative" personality. Conducted by Professor Øyvind L. Martinsen, the study posed 200 questions to 481 people. The subjects fell into three categories. One group of "baseline" subjects such as lecturers or managers, and two groups of people who are generally considered to be creative, such as students of advertising and performing artists.

Walter Benjamin: Art, Aura and Authenticity How has capitalism affected our experiences of art and the media? In the third of his eight-part series on critical theorist Walter Benjamin, Andrew Robinson examines Benjamin's famous thesis that mechanical reproduction has transformed the arts, and explores what a 'political art' might look like. By Andrew Robinson (Source: thearcadesproject.tumblr.com) Perhaps Benjamin’s best-known work is ‘The Work of Art in the Age of Mechanical Reproduction’.

How A Top Creative Director Learned To Embrace The Chaos Of Creativity And Make Great Work In our series, Then & Now, we track the professional paths and key career decisions of the people with the coolest creative jobs around. Ten years ago, Jason Norcross was a recent LA transplant from Boston and a freelance ad creative. He heard that two guys from Wieden+Kennedy were starting their own shop and, even though he had interviews with more established agencies working on bigger brands, he decided to find a way to meet them. And so, about a month after John Boiler and Glenn Cole founded their agency, Norcross joined 72andSunny. Free Desk Here: Connecting Creatives with Free Desk Space One of the best things about freelancing is the freedom of mobility it allows. Many freelancers can work wherever there is wi-fi and a desk. As this mobile freelance community grows, so to do the methods of connecting its members to workspaces around the world. Free Desk Here is an initiative that connects creatives with studios that can offer them free desk space. An offshoot of Open Studio Club, a platform for artists and designers to find interesting and affordable studio space, Free Desk Here fosters a spirit of collaboration by providing creatives a space to work on their own projects and by bringing fresh energy into studios.

About Interaction The field of Interaction Design is relatively new compared to other well-established fields like maths or physics. Although quantitative research in the field has made it more science-like, we can hardly say it is pure science. Experiments in science should be reproducible and theorems in science can be strictly proved, but this is hardly realised in user research. IxD – An unmatured field

Make Good Art: Neil Gaiman’s Advice on the Creative Life, Adapted by Design Legend Chip Kidd by Maria Popova “Make New Mistakes. Make glorious, amazing mistakes. Make mistakes nobody’s ever made before.” Creativity and Connectivity Key to Productive Workplace Kevin Kuske, Skipper and Chief Brand Anthropologist, turnstone , contributed this article to BusinessNewsDaily's Expert Voices: Op-Ed & Insights. Dare we finally say — 'the cubicle is dead?' Many have wanted to, but in the world of the entrepreneur it has finally met its match. Work is changing. Lynda Gratton , author of "The Shift: The Future of Work is Already Here" said, "The speed at which the nature of work is changing is staggering … What we are witnessing now is a break with the past as significant as that in the late eighteenth and early nineteenth centuries …" However, one thing has not changed — the importance of people to the success of great entrepreneurs and small businesses. The information age is giving away to what we like to call 'the networked age of distributed work'.

Too-ticky’s Guide to Life: Wisdom on Uncertainty, Presence, and Self-Reliance from Beloved Children’s Book Author Tove Jansson by Maria Popova “All things are so very uncertain, and that’s exactly what makes me feel reassured.” Tove Jansson (1914–2001) is among the most imaginative, important, and influential children’s book creators of all time, an artist and writer of unparalleled creative vision and great sensitivity to life’s ineffable nuances.