What most schools don't teach 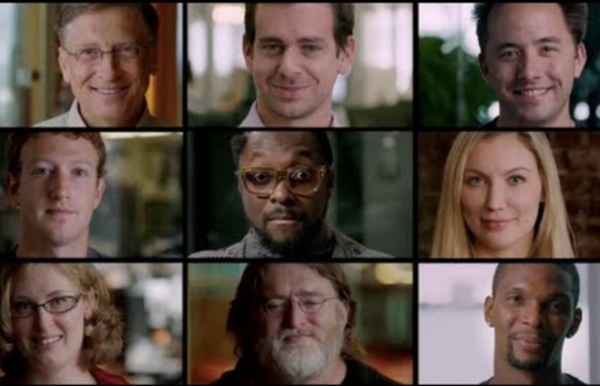 Paul Ford: What is Code? A computer is a clock with benefits. They all work the same, doing second-grade math, one step at a time: Tick, take a number and put it in box one. Tick, take another number, put it in box two. Tick, operate (an operation might be addition or subtraction) on those two numbers and put the resulting number in box one. Tick, check if the result is zero, and if it is, go to some other box and follow a new set of instructions. You, using a pen and paper, can do anything a computer can; you just can’t do those things billions of times per second. 6 tech trends for 2015 that will change our future Technology and innovation can be frustrating to watch in action. That’s because there usually isn’t much action — just incremental change with occasional flashes of brilliance. But the only way to truly understand what’s happening and why is to keep watching.

JavaScript Guide The JavaScript Guide shows you how to use JavaScript and gives an overview of the language. If you need exhaustive information about a language feature, have a look at the JavaScript reference. This Guide is divided into the following chapters. Introduction Grammar and types Control flow and error handling The meritocracy trap This recent quote from an early PayPal exec is absurd: “If meritocracy exists anywhere on earth, it is in Silicon Valley.” It's pretty common for successful people to imagine that their success is solely the result of merit. It's more satisfying than pointing to all the external factors that have contributed to that success. New Tool for Teaching Kids to Code [youtube] Intro to computer science just became Harvard’s most popular freshman class, outpacing economics, the campus paper reports. At Stanford, computer science is the #1 major.

This Will Revolutionize Education - This Will Revolutionize Education by TeachThought Staff “The job of a teacher is not to deliver information. It is to guide the social process of learning. Millennials Will Become The Majority In The Workforce In 2015. Is Your Company Ready? Next year, people born between 1981 and 1996 are poised to become the new workforce majority and will eventually remake the workplace in their own image. That means office culture is in for big changes. As a new survey shows, this generation is already chafing at today's traditional company structures. Freelancer platform Elance-oDesk and Millennial Branding, a research consultancy, interviewed more than a thousand working millennials and 200 older hiring managers to arrive at what they call the “disjoints” in thinking between these two generations.

Fun enthusiast or student – Try LiveCode Start Today. Try LiveCode Indy Free for 10 days Do you have an idea for an app? Is there something you would like to build but you’ve never had the chance to do it? Or do you want to learn more about how your computing devices work and how software is made? 6 Biggest Tech Debuts to Watch in 2015 Technology is always advancing, but it can be hard to know which advancements are really worth watching. Next year, these giant leaps forward could impact your business. An even thinner iPhone, a smarter car, and maybe even a Wi-Fi maker robot could debut next year. 1.

Be Ready for the Learning Space of the Future While many of us are aware of how new technology is changing the way we engage within the learning space, far too few in our industry are paying attention to the changing expectations of the learners moving into these spaces. While attending the New Media Consortium (NMC) Summer 2014 [ed-tech] conference in Portland, Oregon recently, I saw what our future learners—those currently in K-12 and higher education—are encountering. It’s fascinating. It’s creative. Who’s stopping innovation in schools, teachers or administrators? Photo by monkeybusinessimages/Thinkstock You’ve probably heard all the buzzwords: inquiry- or project-based learning, blended classrooms, gamification, play, etc. Whether the cheerleaders shout “21st-century skills,” “character education,” or “entrepreneurship,” it is clear that we want children to have a school experience that is not only about facts and content, but also about empowering thoughtful individuals. School administrators and teachers are mostly in agreement about these intentions and objectives.

Steve Jobs Meeting Techniques Justin Sullivan/GettySteve Jobs. American businesses lose an estimated $37 billion a year due to meeting mistakes. Steve Jobs made sure that Apple wasn't one of those companies. Here are three ways the iconic CEO made meetings super productive. 1. He kept meetings as small as possible. We are trying to close the achievement gap all wrong — teacher On April 27, 2014, hundreds of high school students and other supporters participated in the March to Close the Gap. They walked from the Montgomery County Public Schools board of education building to Courthouse Square to in order to raise the awareness and garner support to close the achievement gap. They are pictured leaving the Montgomery County Public Schools building. (Photo by Sarah L. Voisin/The Washington Post)