9 Things That Will Change and Improve Your Life Forever 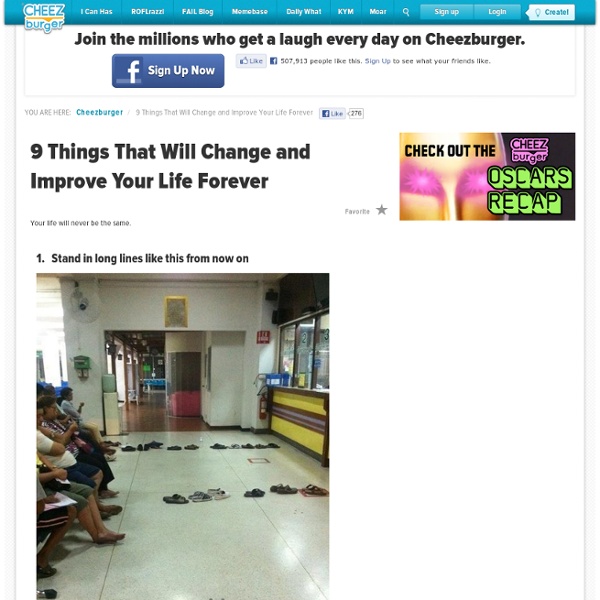 The Best Questions For A First Date First dates are awkward. There is so much you want to know about the person across the table from you, and yet so little you can directly ask. This post is our attempt to end the mystery. We took OkCupid's database of 275,294 match questions—probably the biggest collection of relationship concerns on earth—and the 776 million answers people have given us, and we asked:

69 Awesome Brain Hacks That Give You Mind-Blowing Powers #56. You Can Reset Your Sleep Cycle With a Hunger Strike Chances are, when summer vacation or the holidays come around and you're given time off work or school, your sleeping patterns falter a little bit ("a little bit" is a phrase that here means "you play video games until the 'a.m.' and 'p.m.' dot on your alarm clock has completely lost its meaning"). The thing is, you know you're going to be screwed once the holidays are over and you have to go back to getting up at 6 or 7 a.m., and that you'll be a zombie at work or school for at least a week. Start Every Day as a Producer, Not a Consumer I have to agree that my most productive days are those where I don't allow myself to read the news, check e-mail, facebook, etc., right after I get up. However, that happens because I've got a ton of stuff to get done, and the outside world takes a back seat until my workload is under control. However, there are certain biological necessities that have to happen before I can be productive. The dog gets let out, I go to the bathroom, I eat/drink something, and *then* I sit down to be productive. I also *have* to check my e-mail, because if something blew up overnight or there's something that needs to be dealt with ASAP, I need to know as early as possible.

Simple life hacks to use around the house Simple life hacks to use around the house What great ideas… I am definitely trying some of these!! Source: TheChive Skip to toolbar 40 Ways to Feel More Alive “I don’t believe people are looking for the meaning of life as much as they are looking for the experience of being alive.” ~Joseph Campbell As I write this, I am two hours away from my first weekly acting class in Los Angeles. I’ve been here for almost two years now, and though I loved Community Theater as a kid, I never so much as researched acting classes until a couple weeks back. I frequently said I wanted to do it, along with painting classes, which I’m starting next week, but I always made excuses not to start either.

How to Talk to Little Girls I went to a dinner party at a friend’s home last weekend, and met her five-year-old daughter for the first time. Little Maya was all curly brown hair, doe-like dark eyes, and adorable in her shiny pink nightgown. I wanted to squeal, “Maya, you’re so cute! Look at you! Turn around and model that pretty ruffled gown, you gorgeous thing!” But I didn’t.

7 Social Hacks For Manipulating People 1. Whenever someone is angry and confrontational, stand next to them instead of in front of them. You won’t appear as so much of a threat, and they eventually calm down. 2. Open with “I need your help.” People don’t like the guilt of not helping someone out. Procrastination hack: '(10+2)*5' Following on the idea of the procrastination dash and Jeff’s progressive dash, I’ve been experimenting with a squirelly new system to pound through my procrastinated to-do list. Brace yourself, because it is a bit more byzantine than is Merlin 2005’s newly stripped-down habit. It’s called (10+2)*5, and today it will save your ass. Who it’s for procrastinatorsthe easily distractedcompulsive web-surferspeople with a long list of very short tasks (a/k/a “mosquitos”) people having trouble chipping away at very large tasks What you’ll need

14 Useful Tools for your Kitchen Collection of useful kitchen tools, inventions, products and gadgets that promise to simplify your cooking experience and make it more fun. Digital BBQ Tongs Sensors in the tip measure the internal temperature of the meat and sound an alarm when it is cooked. [link] Cupmen 16 Things I Wish They Had Taught Me in School I am 28 now. I don’t think about the past or regret things much these days. But sometimes I wish that I had known some of things I have learned over the last few years a bit earlier. That perhaps there had been a self-improvement class in school. And in some ways there probably was.