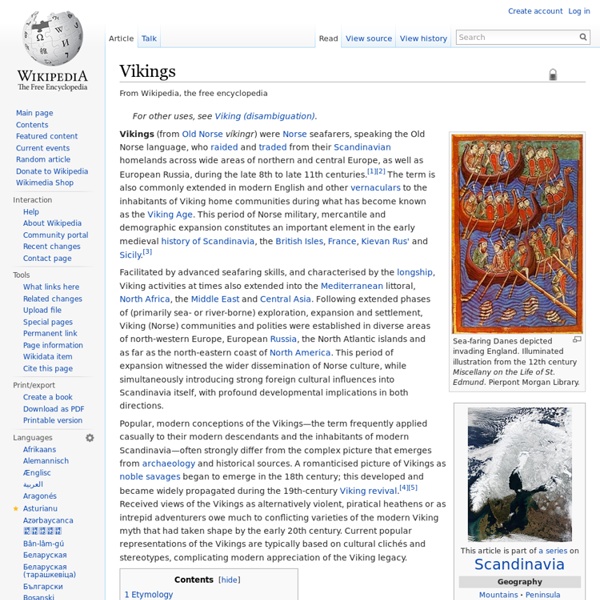 Sea-faring Danes depicted invading England. Illuminated illustration from the 12th century Miscellany on the Life of St. Edmund. Facilitated by advanced seafaring skills, and characterised by the longship, Viking activities at times also extended into the Mediterranean littoral, North Africa, the Middle East and Central Asia. Popular, modern conceptions of the Vikings—the term frequently applied casually to their modern descendants and the inhabitants of modern Scandinavia—often strongly differ from the complex picture that emerges from archaeology and historical sources. Etymology The Old Norse feminine noun víking refers to an expedition overseas.[6][7] It occurs in Viking Age runic inscriptions and in later medieval writings in set expressions such as the phrasal verb fara í víking, "to go on an expedition". The word víking derives from the feminine vík, meaning "creek, inlet, small bay".[9] The form also occurs as a personal name on some Swedish rune stones. Other names History

Viking history The Vikings themselves did not write down their historical events. Historians have had to use other, more indirect means of reconstructing what Viking life was like. The Eastern Route A thousand years ago the Vikings traveled the Eastern Route, to the huge market places in Russia. There is an old Danish document from the 13th century that shows a boat route from Denmark along the Swedish coast to Åland, and via Hitis and Hangö to Reval, i.e. The Viking ships The Viking ships were ca 15 meters long, and they had a mast and textile sails. Read more about the Viking ships Burial ceremonies Funeral ceremonies varied. Viking mythology Viking mythology includes an elaborate creation myth, as well as a graphic description of the future ending of the world, at Ragnarok. Ginnungagap An infinite number of winters before the earth was created there was only the Great Abyss, a gorge of unfathomable depth. Yggdrasil, the World Tree Over time the Gods grew weary of living with the giants in Ginnungagap.

"The Wrath of the Northmen": The Vikings and their Memory "The Wrath of the Northmen": The Vikings and their Memory by Christina von Nolckenou won't be surprised that the Vikings were normally viewed by those they came up against in a markedly negative light. Certainly this was true in England, the area most of our early records come from, and the one I am most familiar with. Indeed, the story of the Vikings is usually taken--and not just by English historians--as starting and ending with events in England. The end is often considered to be the 1066 invasion of England by the Normans (originally Vikings themselves who had settled in northern France and adopted the language they found there), though Viking-type raids continued, especially in the Scottish islands, until about the end of the twelfth century. The beginning of the Vikings' recorded story--which coincides with the beginning of recorded history for Norway--is usually marked by a Viking raid on a northern English monastery in 793. 787 [789]. 1002. 1012.

Norsemen Map showing area of Norse settlements during the 8th to 11th centuries (the Viking Age), including Norman conquests, some extending after this period (yellow). Trade and raid routes, often inseparable, are marked. Norsemen refers to the group of people as a whole who spoke what is now called the Old Norse language, belonging to the North Germanic branch of the Indo-European languages, especially Norwegian, Icelandic, Faroese, Swedish, and Danish in their earlier forms. Norseman means "people from the North" and applied primarily to Nordic people from southern and central[citation needed] Scandinavia. Other names[edit] Vikings was a common term for Norsemen in the early medieval period, especially in connection with raids and monastic plundering by Norsemen in the British Isles. In the eighth century the inrush of the Vikings in force began to be felt all over Pictland. However, British assumptions of where the Vikings came from were not quite correct. Modern Scandinavian usage[edit]

Raiders or Traders? | History & Archaeology Editor’s Note: This article was adapted from its original form and updated to include new information for Smithsonian’s Mysteries of the Ancient World bookazine published in Fall 2009. From his bench toward the stern of the Sea Stallion from Glendalough, Erik Nielsen could see his crewmates’ stricken faces peering out of bright-red survival suits. A few feet behind him, the leather straps holding the ship’s rudder to its side had snapped. With the wind gusting past 50 miles an hour and the Irish Sea just inches from the gunwales, “I thought we’d be in the drink for sure,” says Nielsen, now 63, a retired Toronto geologist. It was August 6, 2007, and the Sea Stallion’s crew of 63 had been underway for five weeks, sailing from Roskilde, Denmark, to Dublin, Ireland, on a voyage that would culminate 35 years’ research—“the best living-archaeology experiment ever conducted anywhere,” Pat Wallace, director of the National Museum of Ireland, calls it.