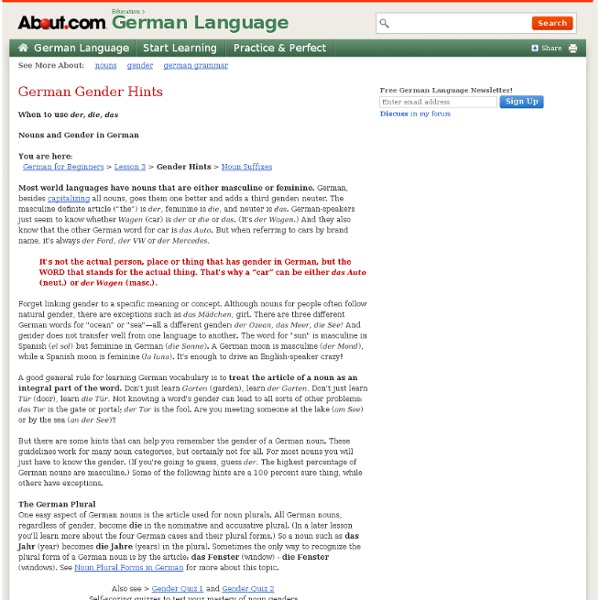 Nouns and Gender in German You are here: German for Beginners > Lesson 3 > Gender Hints > Noun Suffixes Most world languages have nouns that are either masculine or feminine. German, besides capitalizing all nouns, goes them one better and adds a third gender: neuter. It's not the actual person, place or thing that has gender in German, but the WORD that stands for the actual thing. Forget linking gender to a specific meaning or concept. A good general rule for learning German vocabulary is to treat the article of a noun as an integral part of the word. But there are some hints that can help you remember the gender of a German noun. The German Plural One easy aspect of German nouns is the article used for noun plurals. Also see > Gender Quiz 1 and Gender Quiz 2 Self-scoring quizzes to test your mastery of noun genders Once you master these gender tips you never have to make a stupid guess. Remember, always learn any new German noun with its gender! Related Pages

Learn German by watching movies with German subtitles German language > Movies in German with German subtitles Add movie to this section On this page you will find a list of movies in German that you may use to learn and improve your German. You will not find links to download movies here, but instead there is some unique information that will help you a great deal in your studies of German language - it's our user reviews that will help you choose the best movies that suit your level. near the movie title. which level of German is necessary in order to understand the movie: intermediate or advanced, how fast the tempo of speech is, whether the movie contains some specific vocabulary (slang, medical terms, etc.). I invite YOU to write such review for your favorite German movie. If you see a little sign near the movie title, that means that this movie has a vocabulary list compiled by one of our users. Animated movies are indicated by a little penguin Automatic search for German subtitles for movies and TV series in German on opensubtitles.org: