Mantra from the Dalai Lama 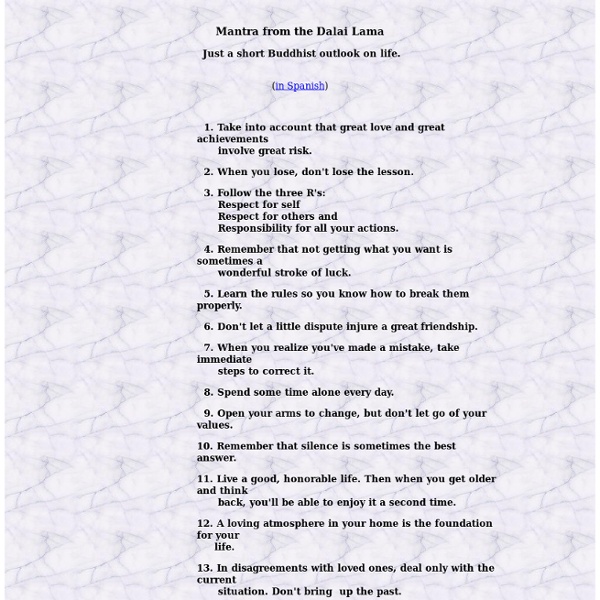 Biblioteca Vasconcelos in Mexico City is gigantic. The gorgeous structure, which covers 38,000 square meters (that's over 400,000 square feet), holds more than 470,000 books. Designed by Alberto Kalach, the "megalibrary" features transparent walls, hive-like bookshelves, and mismatched floors. Visitors can take in a massive white whale skeleton covered in graphite rings by artist Gabriel Orozco. Shambhala SunSpace Read the intro from the new Shambhala Sun book, Buddha’s Daughters: Teachings from Women Who Are Shaping Buddhism in the West In addition to A Beginner’s Guide to Meditation, this Spring marks the release of another Shambhala Sun book, Buddha’s Daughters, edited by Shambhala Sun Deputy Editor Andrea Miller. The book is available now — click here to order or for more information. Below, you can read Andrea’s introduction to the book (as well as browse its chock-full Table of Contents). Buddha’s Daughters: Introduction I had my first taste of Buddhism in university when I took a class on Chinese and Japanese religions.

Buddhism and the Brain ? SEEDMAGAZINE.COM Credit: Flickr user eschipul Over the last few decades many Buddhists and quite a few neuroscientists have examined Buddhism and neuroscience, with both groups reporting overlap. I’m sorry to say I have been privately dismissive. One hears this sort of thing all the time, from any religion, and I was sure in this case it would break down upon closer scrutiny. When a scientific discovery seems to support any religious teaching, you can expect members of that religion to become strict empiricists, telling themselves and the world that their belief is grounded in reality. 50 Must-Read Personal Development Bloggers That’ll Change Your Life Tired of reading the same blogs over and over? Looking for fresh articles to read? A new angle on your favorite personal development topics? I got you covered! As much as I love writing about this subject, I can’t take credit for everything I write. Much of my knowledge on self-development came from reading these great writers and thinkers.

Thinking in Buddhism All chapters Notes: The most readable version of this thesis is the nicely-formatted PDF (created by Christopher Richardson in 2001). The 1994 original was written in the TEX publishing code, which did not allow for easy conversion to html. Some characters are missing. Lucid Dreaming By lucid dreaming, you can gain complete control over the one place that no one will ever care about: your imagination. Just The Facts Lucid dreaming is a scientifically proven phenomenon.

This is the study of the interaction of people, media and machines within the digital environment. It emerges from the complex inter-relationships between computers and networks, humans, human society and the media – the way that almost every aspect of our culture (including the sciences, arts, civic life, entertainment, fiscal, economic and business sectors) is increasingly underpinned by digital networks. Understanding this ecology is the new literacy of the 21st century. Green Tara and White Tara - Feminist Ideals in Buddhist Art Goddess Tara, a female Buddha and meditational deity, is arguably the most popular goddess in the Buddhist pantheon. She is considered to be the goddess of universal compassion who represents virtuous and enlightened activity. The word Tara itself is derived from the root 'tri' (to cross), hence the implied meaning:' the one who enables living beings to cross the Ocean of Existence and Suffering'. Her compassion for living beings, her desire to save them from suffering, is said to be even stronger than a mother's love for her children. The story of Tara's origin, according to the Tara Tantra, recounts that aeons ago she was born as a king's daughter. A spiritual and compassionate princess, she regularly gave offerings and prayers to the ordained monks and nuns.

The Experience and Perception of Time What is ‘the perception of time’? The very expression ‘the perception of time’ invites objection. Insofar as time is something different from events, we do not perceive time as such, but changes or events in time. Analyse and Compare Private Companies Raising Money in Real-time We track private companies raising money across leading platforms globally. We deploy a rigorous process to cut out the noise, crunch the numbers, and standardise the data. We vigilantly, employ strict quality checks to ensure that our end-users receive only the most relevant metrics to visualise, compare and analyse the companies easily, in real-time. How do you analyse and compare multiple deals?