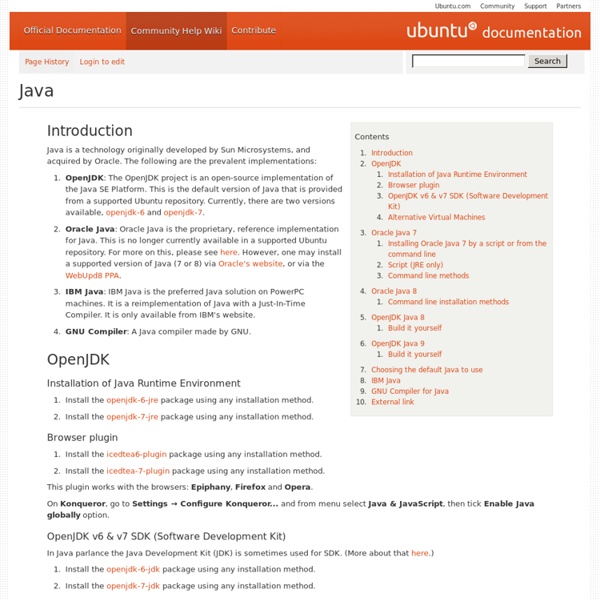 Introduction Java is a technology originally developed by Sun Microsystems, and acquired by Oracle. The following are the prevalent implementations: OpenJDK: The OpenJDK project is an open-source implementation of the Java SE Platform. OpenJDK Installation of Java Runtime Environment Install the openjdk-6-jre package using any installation method. Browser plugin Install the icedtea6-plugin package using any installation method. This plugin works with the browsers: Epiphany, Firefox and Opera. On Konqueror, go to Settings → Configure Konqueror... and from menu select Java & JavaScript, then tick Enable Java globally option. OpenJDK v6 & v7 SDK (Software Development Kit) In Java parlance the Java Development Kit (JDK) is sometimes used for SDK. Install the openjdk-6-jdk package using any installation method. Alternative Virtual Machines Most users won't need to worry about these, but if you use an architecture (e.g. JamVM: This is the default VM for ARM in 11.10. Oracle Java 7 Script (JRE only)

Evolution of shells in Linux From Bourne to Bash and beyond M. JonesPublished on December 06, 2011/Updated: December 09, 2011 Connect with Tim Tim is one of our most popular and prolific authors. Shells are like editors: Everyone has a favorite and vehemently defends that choice (and tells you why you should switch). My first experience with a modern shell came in the 1980s, when I was developing software on SunOS. Let's begin with a short history of modern shells, and then explore some of the useful and exotic shells available for Linux today. A history of shells Shells as little languages Shells are specialized, domain-specific languages (little languages) that implement a specific use model—in this case, providing an interface to an operating system. Shells—or command-line interpreters—have a long history, but this discussion begins with the first UNIX® shell. The shell introduced a compact syntax for redirection (< > and >>) and piping (| or ^) that has survived into modern shells. UNIX shells since 1977 Figure 1.

ubuntu java installer [How to] Never Miss an Ubuntu Notification Have you ever missed a notification pop-up in Ubuntu? I have, and whilst Notify OSD – the proper name for the alert delivery system used in Ubuntu – can hardly be called a ‘blink and you miss it’ affair, it is, still, possible to miss notifications whilst you’re off making coffee or tending to a harem of guinea pigs. That’s where this ‘Recent Notifications’ applet comes into play. The service it provides is simple enough: it logs all notifications that show up on your screen – whether you act on them or not. Useful? I’m struggling to find a use case of my own in which I’d need to see missed notifications (Chat, Gwibber etc are all stored in the Messaging Menu for example) but if I am on the look out for gaining a more detailed report of a missed notification (such as an IRC message) then this applet would certainly be helpful. Download

Why java has "String" type and not "string" Desktop file specification extension | GrumZ.Net Introduction This is DES-EMA, the Extension for Menus and Actions of the freedesktop.org Desktop Entry Specification (DES). This specification aims to define a common format for user actions, allowing creators to share their actions between compliant desktop environments. This also covers how actions may be organized in a hierarchy of menus, submenus, and so on. It explains how actions and menus should be described in .desktop files, how and where these .desktop files are to be searched for, and how the final hierarchy should be built. This specification doesn't explicitly handle the « level-zero » case (but see the appendix A for a proposition about that). Such an extension, targeting action items in file manager context menu, has been widely discussed in KDE, freedesktop.org and Thunar lists. This is version 0.15 of our draft, updated on 2010, November 23rd (see ChangeLog below). Desktop file Desktop file format This specification relies on the common syntax defined in DES. Managed objects

Setting up Java with Windows CMD This page is obsolete. This document instructs you on how to use the Windows Command Prompt with Java. These instructions are specialized to Windows 7, but are similar for Windows XP and Windows Vista. You will use the Java compiler javac to compile your Java programs and the Java interpreter java to run them. You should skip the first step if Java is already installed on your machine. Download and install the latest version of the Java Platform, Standard Edition Development Kit (Java SE 6 Update 27). You will type commands in an application called the Command Prompt. Launch the command prompt via All Programs -> Accessories -> Command Prompt. You will use the javac command to convert your Java program into a form more amenable for execution on a computer. From the Command Prompt, navigate to the directory containing your .java files, say C:\introcs\hello, by typing the cd command below. You will use the java command to execute your program. When I type, "java -version" I get an error.

How to Write Doc Comments for the Javadoc Tool Javadoc Home Page This document describes the style guide, tag and image conventions we use in documentation comments for Java programs written at Java Software, Oracle. It does not rehash related material covered elsewhere: For reference material on Javadoc tags, see the Javadoc reference pages. For the required semantic content of documentation comments, see Requirements for Writing Java API Specifications. Contents Introduction Principles At Java Software, we have several guidelines that might make our documentation comments different than those of third party developers. Thus, there are commonly two different ways to write doc comments -- as API specifications, or as programming guide documentation. Writing API Specifications Ideally, the Java API Specification comprises all assertions required to do a clean-room implementation of the Java Platform for "write once, run anywhere" -- such that any Java applet or application will run the same on any implementation. Terminology javadoc getImage