The Top 10 Healthiest Seeds on Earth 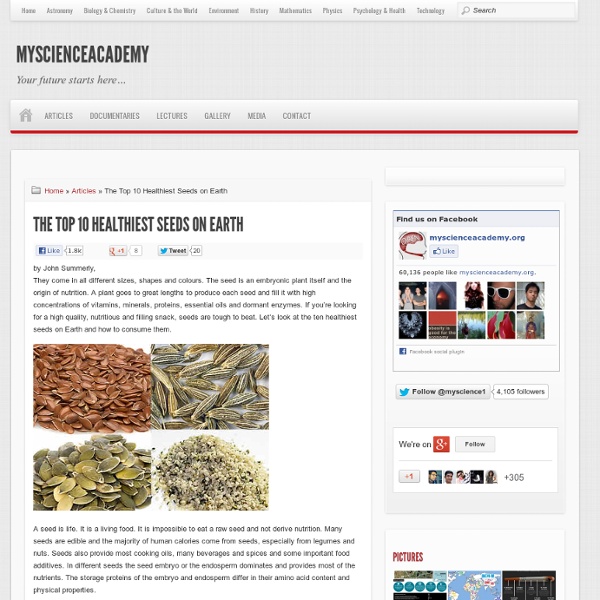 by John Summerly, They come in all different sizes, shapes and colours. The seed is an embryonic plant itself and the origin of nutrition. A plant goes to great lengths to produce each seed and fill it with high concentrations of vitamins, minerals, proteins, essential oils and dormant enzymes. If you’re looking for a high quality, nutritious and filling snack, seeds are tough to beat. Let’s look at the ten healthiest seeds on Earth and how to consume them. A seed is life. How to Eat Seeds There is only one way to derive nutrition from seeds and that is to eat them raw. - Choose raw and unsalted seeds - Avoid coated or roasted seeds - Avoid sugar coated seeds The 10 Healthiest Seeds on Earth Serving Size = 1 Tsp The seeds are loaded with vitamins and minerals, are an excellent source of fibre, protein and antioxidants, and are the richest plant source of omega-3 fatty acids. The seeds are gluten-free, which also makes them appealing to people with celiac disease or an aversion to gluten. Related:  Heart Health • Healthful Living

7 Foods Rich in Iodine The thyroid gland synthesizes thyroid hormones and iodine is an essential trace mineral that is crucial for the thyroid to function properly. Eating foods rich in iodine ensures the thyroid is able to manage metabolism, detoxification, growth and development. Research has shown that a lack of dietary iodine may lead to enlargement of the thyroid gland, lethargy, fatigue, weakness of the immune system, slow metabolism, autism, weight gain and possibly even mental states such as anxiety and depression. The good news is that there are many popular foods with iodine, all of which are easy to incorporate into your daily diet. The Recommended Daily Allowance (RDA) for iodine is 150 micrograms daily for everybody over the age of 14. 1. The ocean hosts the largest storehouse of iodine foods, including Kelp, Arame, Hiziki, Kombu, and Wakame. 2. This antioxidant rich fruit is another great source of iodine. 3. A natural probiotic, yogurt is an excellent iodine food you should add to your diet. 4.

Heirloom Seeds: Sustainably Grown, Organic, Untreated and Open-Pollinated Sustainable Seed Company How to start plants from seed indoors to transplant in the garden later Andrea Levy, The PD With visions of plump, juicy tomatoes, crisp cauliflower and sunny marigolds dancing in their heads, some gardeners spend late winter sowing seeds indoors and pampering their emerging beauties until it's warm enough to move them outdoors. These indoor gardeners like to get growing early for several reasons. One, a packet of a dozen or so seeds, which costs a few dollars, is a fraction of what ready-to-plant botanicals cost. "It's cheaper than buying flowering plants and vegetable starts," says Christine Harris, an Ohio State University Extension Cuyahoga County master gardener, who won the statewide award of volunteer of the year at the International Master Gardener Conference in Charleston, W.V., last year. "Costs for these have skyrocketed due to fuel costs in greenhouses and for transportation." Harris, who has been starting seeds indoors for about 13 years, says she has discovered a lot of vegetables and flowers that are not available at local greenhouses. Materials

Research: Pineapple Enzyme Kills Cancer Without Killing You Could an extract of pineapple fruit be both safer and more effective than a blockbuster chemotherapy agent? Every once in a while a study pops up on the National Library of Medicine's bibliographic citation database known as MEDLINE that not only confirms the therapeutic relevance of natural substances in cancer treatment, but blows the conventional approach out of the water. Published in 2007 in the journal Planta Medica, researchers found that an enzyme extracted from pineapple stems known as bromelain was superior to the chemo-agent 5-fluorauracil in treating cancer in the animal model. The researchers stated: "This antitumoral effect [bromelain] was superior to that of 5-FU [5-fluorouracil], whose survival index was approximately 263 %, relative to the untreated control." The material safety data sheet (MSDS) for 5-FU states: The dose at which 50% of the animals given the drug die is 115mg/kg, or the equivalent of 7.8 grams for a 150 lb adult human.

15 Amazing Health Benefits of Eating Avocados Many of us do not have to be “sold” on the benefits of avocados—their silky texture and versatile flavor make them hard not to love. But when studies show that avocado-eaters are healthier overall than their counterparts, we feel justified in our love-affair with avocados. And the research may even convince some non-avocado-eaters to cross over to the other side. Avocados are also considered as one of the healthiest foods in the planet because they contain in excess of 25 essential nutrients, including vitamin A, B, C, E, & K, copper, iron, phosporus, magnesium, and potassium. Avocados also contain fiber, protein, and several beneficial phytochemicals such as beta-sitosterol, glutathione and lutein, which may protect against various disease and illnesses. Maintain a healthy heart Avocado contains vitamin B6 and folic acid, which help regulate homocysteine levels. Lower cholesterol levels Control blood pressure Anti-Inflammatory properties Promote eye health Regulate the blood sugar levels

How to Make Homemade Peppermint Extract Part of the reason that I decided to grow mint this year was so that I could try making my own peppermint extract. Jesse and I are pretty much obsessed with mint (especially mint plus chocolate) so we go through a lot of mint extract. Even though I buy my extracts through Azure Standard, they’re not exactly cheap, so making my own seemed like a great way to save some money. I finally got down to it last weekend. How to Make Peppermint Extract I did a quick Google search and found a multitude of recipes, all of which followed the same basic outline. Harvest a bunch of mint leaves from your mint plant. Harvested mint leaves Remove mint leaves from stalks (if applicable) and pack leaves into a measuring cup to determine how much mint you have. Mint leaves ready to be rinsed Rinse mint leaves with water, then squeeze leaves in your hands to bruise the leaves before placing them into a clean glass jar. Cover your jar with a lid and allow to steep for about a month in a cool, dark place.

Seedstarting FAQs, How to Start Seeds, Growing from Seed A seedstarting kit, such as the Seedstarting Grow Kit, makes it easy to grow vigorous, healthy seedlings. I've talked to so many gardeners who are experienced at growing plants outdoors but hesitate to start seeds indoors. To me, starting seeds is one of the most rewarding parts of gardening. It gets my hands in the soil (or at least the seedstarting mix) during the dark, cold days of late winter and early spring. And it's so amazing and rewarding to plant a seemingly lifeless seed and watch it sprout and grow. Here are answers to some of the hundreds of questions I've been asked about seedstarting. Three for the price of one! Even the most experienced seedstarters occasionally have problems. Poor germination. Damping off. Mold and algae growth. Pale, stretched-out seedlings with weak stems. Discolored leaves.

The Many Benefits of Asparagus (NaturalNews) Asparagus is a springtime vegetable that is versatile and uniquely delicious. Buying it this time of year is best as it is fresh and particularly nutritious, since it is in season. Studies show that asparagus balances insulin levels, which means that it powerfully prevents diabetes. Ensuring that our insulin levels are stable is one of the most important things we can do for our health. Asparagus is also a powerful aphrodisiac and one of the best foods to increase libido. Asparagus is also one of the only vegetables to contain inulin, which feeds friendly bacteria that live in the large intestine. Asparagus contains loads of folate. Here are some other benefits that make asparagus one of the best super foods on the planet. * Great for your heart * Asparagus fights depression and puts you in a good mood * Gets rid of warts by eating one of the best super foods on the planet! * Asparagus lowers cholesterol * Stimulates milk production in nursing mothers * Helps with treating HIV